Ticketmaster also has the US Senate on its back – Ruetir

A three-hour hearing in the case of the disastrous ticket sales for the tour of Taylor Swift, one of the most famous pop singers in the world, was held in the US Senate on Tuesday. The sale of tickets for the tour had been entrusted exclusively to Ticketmaster, the main digital platform offering this service in the United States, which had not been able to handle the enormous amount of requests in the reserved presale phase, and had had to cancel the presale open to all, leaving thousands of fans without tickets.

Even before this event, however, the company behind Ticketmaster – which was born from a merger with the event organization company Live Nation, forming Live Nation Entertainment – had frequently been accused of having a monopolistic position by fans and politicians, due to the its extensive control over the events and ticketing industry. The criticisms had intensified in recent times because Ticketmaster had begun to offer increasingly higher prices for tickets: the latest case was the one related to the Bruce Springsteen tour. During the hearing, a representative of the American Antitrust Institute defined that of Live Nation “a very traditional monopoly”. Live Nation is also active in Italy as regards the organization of events.

Tuesday’s hearing was requested by US Senator Amy Klobuchar, chair of the Judiciary Subcommittee on Competition Policy, Antitrust and Consumer Rights. Back in 2019, Klobuchar asked the Justice Department for an investigation into Live Nation Entertainment’s monopoly, and the same department launched another investigation last year into the company’s excessive power in the music industry.

In a recent interview with Rolling Stone, Klobuchar explained: “The operators of the arenas hosting the concerts told us they fear that if they don’t use Ticketmaster, they will stop having Live Nation shows in their venues. This makes it difficult for any of Ticketmaster’s rivals to enter the market.” During the hearing, this point was also supported by Jack Groetzinger, CEO of SeatGeek, a platform competitor of Ticketmaster.

The problem dates back to the merger between Live Nation, which deals with the promotion and organization of events, and Ticketmaster, which manages the online sale of tickets: together the two companies manage a large part of the music industry chain, with a consequent monopoly and increase prices due to lack of competition. At the time of the merger, in 2010, the US government had intervened by requesting and obtaining that Live Nation Entertainment respect a series of conditions that should have avoided the risk of a monopoly in the music industry. After the Justice Department investigation in 2019, this 10-year agreement was renewed for another five years, despite it being determined that not all conditions had been met. Sen. Blumenthal said during Tuesday’s hearing that if it is concluded that there were more violations, “a dissolution of the merger should be considered.” 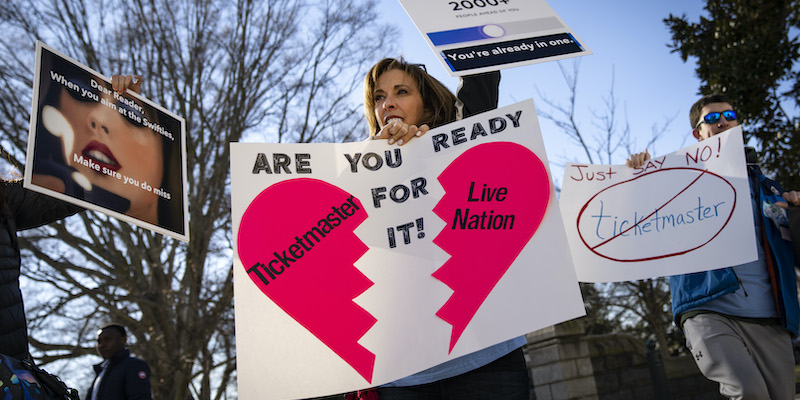 During the hearing, Live Nation Entertainment president Joe Berchtold defended himself against monopoly charges, arguing that his company is not solely responsible for the high ticket prices and noting that it controls only 200 concert venues in the over 4,000 in the United States. He also explained for the first time that the incident during the sale of tickets for Taylor Swift’s tour would have been caused by bots, i.e. computer systems used by organizations that scalp to grab a large number of tickets as they become available online, at the same time purpose of running them out and then reselling them on other online channels at higher prices.

To avoid this phenomenon, Ticketmaster initially opens sales only to “verified fans”, i.e. people who have booked well in advance. “Although the bots failed to break into our systems or buy any tickets, the attack required us to slow down and even suspend our sales. This is what led to a terrible shopping experience, which we deeply regret,” Berchtold said, arguing that the bot attacks were three times higher than the norm. He also added that 2.2 million tickets were ultimately sold, of which less than 5 percent were resold by touts.

Speaker of the Russian Parliament: US President Joe Biden Terrorist

Roger Waters to the UN Council to the presidents of the USA, Russia and Ukraine: “Find an agreement on a ceasefire”

Shin Tae-yong Claims Marselino Ferdinan’s Steps Are Inappropriate, Should Have Waited for the U-20 World Cup

Appointments, the government would like to clean up but can't: here's why

In the race for the best quantum computer there are two sides, and they are not the United States and China

Plane crashes in Nepal: the last dramatic images before the crash | VIDEO