The most successful alternative to Twitter is not Mastodon: it is Koo and it already has more than 60 million downloads

One of the side effects of Elon Musk’s landing on Twitter, driven by his particular way of running the company, has been the spectacular growth experienced by some alternative platforms. Many users seem to have migrated in search of new options and some of them have found Koo.

We are talking about a proposal of Indian origin available in 20 languages ​​and with international deployment that ensures that it has become the second most important microblogging platform in the world. This milestone, according to its creators, has been possible by overcoming the barrier of 60 million global downloads.

The numbers speak, or that is what it seems

Despite its growing popularity, many people may not have heard of Koo. Sensor Tower data can help us understand this phenomenon. These indicate the largest number of users of this proposal is concentrated in India, Brazil and Nigeriahaving, for the moment, an almost imperceptible presence in Europe.

Bombinate Technologies, Koo’s parent, says the social network has more than 50 million accounts, but leaves out one important detail: the number of monetizable daily active users (mDAU), a key metric for measuring community health and that Let’s remember, discovering it on Twitter has been one of Elon Musk’s main missions with Twitter.

These values, however, contrast especially with Mastodon, a social network, also for microblogging, much better known in Europe and America but which, according to The Guardian, has an enormous number of fewer accounts. The decentralized social network has 5.9 million accounts and 1.8 million monetizable active users.

And, although both proposals are far from reaching Twitter, which boasts some 237 million mDAU, Koo’s growth is remarkable. So we wonder what your proposal has to have managed to conquer a large number of users in such a short time (the first version of Koo was launched in April 2020). Let’s see.

When opening the Koo mobile application (available in the Play Store and App Store) we find three icons at the top. On the left, by tapping on our photo, in addition to editing our profile, we can see our followers and followers, as well as review, at a glance, the likes, comments, mentions, ‘re-Koos’, such as Twitter retweets, and saved items. 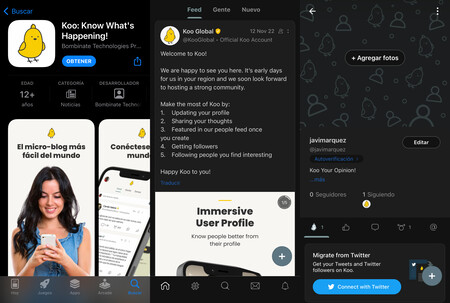 On the right side, if we choose the fire icon, we can see popular posts from the last 24 hours. In the center we find the application icon, which when chosen shows us three columns: Feed (posts from followers), People (posts from new users in the region) and New (recommended new posts). At the bottom are Home, Hashtags, Search, DMs and Notifications.

As we can see, Koo’s mechanics are very similar to Twitter’s. The application allows you to use hashtags, add links, multimedia content and polls. In addition, it is possible to launch a ‘Koo’, which is the equivalent of a Tweet, but of 400 characters, with a voice note of up to one minute. The platform even has its own relevant account verification system, although it doesn’t have an alternative like Elon Musk’s Twitter Blue.

The rise of this new social network, as we say, may be driven by the exodus of Twitter users, however, it is not the only factor that has favored it. In early February 2021, some Indian government ministers moved to Koo after Twitter refused to block the accounts of certain activists citing freedom of expression, Japan Times reports. This has been followed by high-profile figures in the country, including Bollywood actors.

However, some challenges remain on the horizon for the future of the social network. The first of these is its international expansion. Koo is present in a large number of countries, but its core of users is still within the borders of India and it is starting to take off in Brazil. Will he manage to make a place for himself in Europe? In time we will know.

Images: Koo | Screenshots of Play Store and Koo on iOS

In Xataka: It’s not your thing, your friends are probably more popular than you: it’s the friendship paradox

Indicators: Wall Street opens in the red and the Dow Jones falls 0.63%