On the occasion of the release of The War of the Brothers of Magic: The Gathering, we’ve interviewed Matt Danner, Wizards of the Coast Senior Creative Lead, Worldbuilding

Matt Danner is Senior Creative Lead on Wizards of the Coast’s World Building team. He started working for the company as a brand manager in June 2016 and was transferred to the Worldbuilding team in October 2018. “Danner,” as he is called, contributed to both the vision design and set design of Warhammer 40,000 Commander Decks and to the design of The Brothers War, the latest collection of the world’s oldest and best collectible card game, Magic The Gathering. This is the second of four installments in the Phyrexia story, and is the first standard set to incorporate Beyond the Multiverse with Transformers.

1. What was your first contact with Magic? What is your favorite card? Favorite color? How did you come to work on Magic? 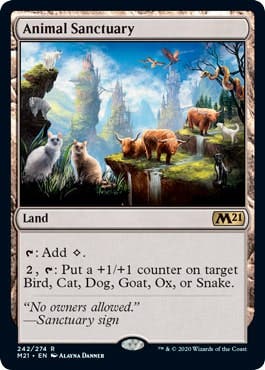 I was introduced to Magic during elementary school and instantly fell in love with the amazing worlds that the card game brought to life. These cards sparked my imagination with their images of mighty angels, raging dragons, and wild beasts. Green magic, with its focus on nature, harmony and strength, is the color I stick with the most. My favorite card is Animal Sanctuary, which was illustrated by my wife and features our beloved cats (Oliver and Charlie) and dog (Jake), and it holds a special place in my heart.

2. What is the creative process of the card illustrations like? He is mostly a craft illustrator or more of digital technology.

Cards start with a process called toplining, where we determine what the image of the card could be based on its color and mechanics. The next step is to conceptualize the art description, conveying to the artists what we hope to show in the scene. All of our card art is created by our incredibly talented roster of artists. All of his work is traditionally rendered or digitally painted.

3. Who are the biggest influences on the card artwork for this release?

The brothers’ war it’s a chance to relive a historic moment from Magic’s past. We pay homage to ancient history and art, boldly reimagined for the present, and set up a ton of exciting moments in upcoming sets.

4. What would you highlight from The Brothers’ War?

Celebrating Magic’s 30th anniversary by going back to our original plan and retelling a formative story. In The brothers’ war we see Urza and Mishra’s massive robot fighting for the fate of Dominaria. We follow our current characters as they look back in time in an effort to gain insight on how to deal with the existential threat they face in the present, the dreaded Phyrexians.

5. How many artists have worked on The Brothers’ War?

Over 300 of the world’s most talented artists helped contribute the cards in this newest set.

6. Could you give us details of the two armies and the big differences between them?

It might be easier to describe the similarities between the Urza and Mishra brothers. Each of the brothers thinks that he is fundamentally justified in his actions: his brother is the real idiot, and they themselves are absolutely right. Both forces use colossal robots to try to dominate the battlefield. Urza has mechs that are large, imposing, bulwarks of devastating power. Mishra mechs tend to be faster, more agile and agile.

7. Could you explain the mechanics of these new cards?

Each prototype card includes two sets of features. First, a higher default mana cost, power, and toughness are what you’d expect on the card. A second set of features exists as part of the Prototype ability. There you will find an alternate mana cost and alternate power and toughness.

When you cast a prototype card, you choose the stat set you’re using. If the battle is ending and you need a heavy character, use the default stats. If you’re looking to establish a presence on the battlefield early in the game, the Prototype stats might be perfect. Either way, the artifact creature will have the other abilities in its text box. Big or small, Phyrexian Fleshgorger has menace, lifelink, and a very terrifying protection ability.

If a prototype card isn’t on the battlefield with its prototype characteristics or on the stack after it’s cast with those characteristics, it will have its normal set of characteristics. This means that if Phyrexian Fleshgorger is in your library, graveyard, hand, or exile, it’s a 7/5 colorless artifact creature with {o7} mana cost and a corresponding mana value of 7.

However, if you cast a prototype spell using the prototype ability, it retains those characteristics until it leaves the battlefield. That 3/3 Phyrexian Fleshgorger is black, not colorless. Its mana value is 3, not 7. And if you copy it, the copy will also be a prototype, in this case, the 3/3 version of our friend Phyrexian Wurm. 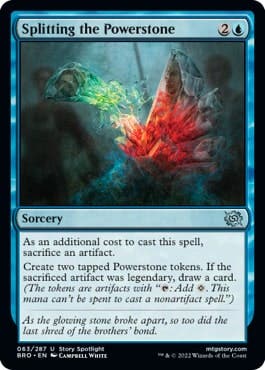 So what are we all fighting for anyway? Well, because of the power stones, for the most part. Power Stones is a new type of preset token that joins favorites like Treasure, Food, and Clue. Power Stones gives you more mana, which is great for pretty much every deck there’s ever been. 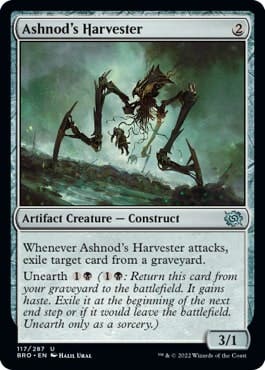 Speaking of unearthing ancient mechanics, Unearth is back! Unearth is an activated ability that previously allowed creatures to go beyond the battlefield. It still does, but now non-creature artifacts are having some fun too. However, most of the set cards they’ve unearthed are artifact creatures like Ashnod’s Harvester.

Unearth can activate only while the card that has it on is in the graveyard, and only as a sorcery. The unearthed permanent gains haste. In many cases, you’ll be digging up creatures to perform one more attack. At the beginning of the next end step, exile the unearthed permanent. If it leaves the battlefield before then, it is exiled instead. As they say, all good. . .

Meld returns in The brothers’ war as strange and wonderful as it was the first time. Fusing allows specific pairs of cards, called fused pairs, to combine into a single giant permanent. There are three fused couples in The Brothers’ War, forming Urza, Mishra, and Titania. Let’s take a closer look at how the cards combine to form Urza. 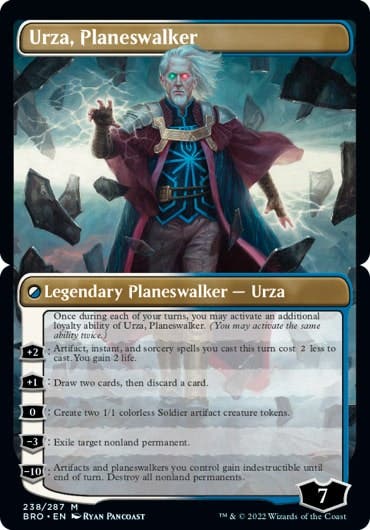 One card in each fusion pair, in this case, Urza, Lord Protector, will tell you exactly how to fuse the two. He can fuse cards only if he owns and controls them, and only if they are the actual named cards. So symbolic copies won’t work, and neither will any other copies. Basically, the back of the cards form a puzzle, and if you can’t complete the puzzle image, the combination will not work. Activating Urza’s ability will cause both cards in this merged pair to be exiled and then merged together, meaning they’ll return to the battlefield as one permanent. A unique and impressive perm.

Urza, Planeswalker (maybe the comma is his middle name?) will enter the battlefield with seven loyalty counters as expected and behave like any other planeswalker from there. A cast permanent is a single permanent; he is simply represented by two cards at the same time. If a melded permanent leaves the battlefield, both cards go where that permanent went. Once that happens, the fusion will break and the two cards will revert to being two separate cards.

8. What is the future of the saga?

The detonation of the sylex on Dominaria marked the end of the war and led to a dark period in history, marked by an ice age. While all of that is in the past, our heroes of the present must use what they have learned from looking back to help them in the present. In the next set, Phyrexia, All Will Be One, which will be released on February 10, 2023, we will travel to the homeworld of Phyrexia, where the efforts of our heroes will determine the fate of the multiverse.

James Gunn is clear about the worst of Marvel Studios

Actress responds to controversy over her physique

Hulk takes a liking to the horror genre

League of Legends: Trailer for the 2023 season causes ridicule, complaints and memes for being of very poor quality | Ruetir.com