More than electric! Benda works on a supercharged V2 300 – News

More details have leaked about the bold project of a small supercharged sports car that one of the most interesting emerging Chinese brands is working on.

Let’s go back to talking about Chinese motorcycles and let’s go back to talking about Thing, one of the most dynamic emerging brands. Appearing on our market a couple of years ago, Benda immediately made itself known with cruiser motorcycles with attention to aesthetics and with non-trivial technical choices and is preparing to offer an increasingly articulated range. So far nothing strange. Benda revealed in January 2021 that it would launch a four-cylinder, the LFS700, and a V-twin, the VTC-300 and both arrived within the year. To these, however, he had also added the idea of ​​a twin cylinder still 300 but supercharged. The design of this VTR-300 Turbo it was seen about a year ago even if only as a CAD drawing and thus leaving much more to the imagination. In the last few days, however, the recording of one has been leaked patent application precisely because of the supercharging system of this engine and we talk about it not only for the exceptional nature of having a turbo on this volume but also for the particularities that emerge from the deposited diagrams. 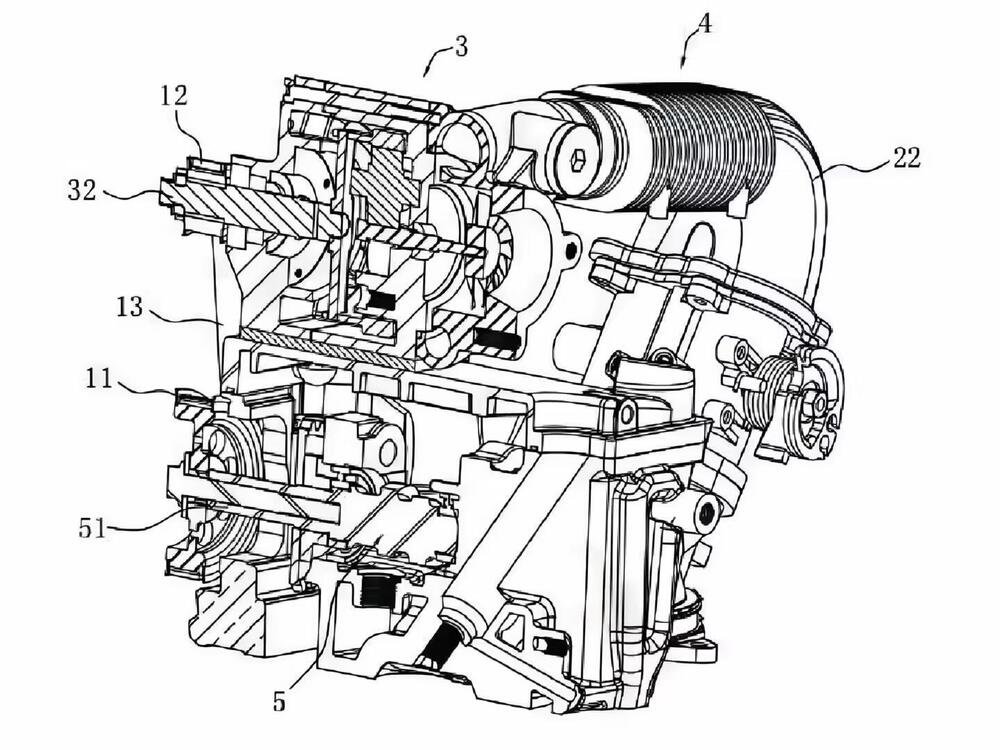 Two years after the first announcement, the VTR-300 Turbo is still an unknown and only now we can get a first idea of ​​its engine and the real motivation of that Turbo denomination. Based on the drawings in this patent we infer that this 300 it will not be turbocharged at all but supercharged with mechanical drive. In doing so, the engine power could easily go from 30 HP of the normally aspirated form to 50 HP. The basic engine, in fact, would be the same V at 60° in 298 cc already in production, but the supercharging system seen in Benda’s patent application is anything but conventional. Instead of being driven by the crankshaft, the small supercharger is mounted on one of the cylinder heads SOHC of the engine and and is driven by the camshaft. A centrifugal compressor which in shape recalls that of Kawasaki’s H2 models. The intake air is pushed through an intercooler and then into a single throttle body to then be channeled into the intake system of both cylinder heads through a Y-duct. So the Chinese engineers have gained greater compactness but they are forced to use a higher capacity compressor because the camshaft has a rotation speed that is half that of the crankshaft. A further innovation can be found in the compressor control which takes place with a variable ratio transmission with V-belt and movable pulleys. A solution similar to the automatic transmission of a scooter to be clear and which would allow the action of the compressor to be varied according to the rpm.

In reality, we have no confirmation as to whether we will actually see this VTR-300 Turbo nor when, also because Benda recently admitted some difficulty in quickly fulfilling the orders received. In short, it is very busy responding to the growing demand of customers and producing the bike already presented with the remarkable V4. However, we remain curious to know the fate of this little supercharged twin-cylinder jewel, especially in a period in which technical innovations are mostly the prerogative of the electron models of some startups.

Verstappen will be in Drive to Survive 5: “They understood my point of view”

Have we entered the era of the “Fantastic Twelve”?

Lazio project: now Luis Alberto does not touch himself, and Sarri always hopes in Luca Pellegrini

Thiago Motta and the Cup: “Format? Mou is right. In England stadiums are always full”

ISW, Russian ‘decisive action’ in sight in the next 6 months – Icona News