On February 28, 1976, The New York Times published an article called “Death Race Game Gains Fans, But Not Security Council.” Back then, video games were in their infancy and public opinion about them was beginning to form. In this context, one of the first great controversies arose that marked video games forever and contributed to creating that stigma that still exists.

The United States National Security Council (NSC) was not happy with Death Race, a game created and distributed by Exidy. The agency considered that it promoted violence among young people by putting them “behind the wheel trying to run over humanoid figures on a television screen.”

The media at the time were determined to create panic among the population and did not stop describing the game with adjectives such as “disgusting”, “morbid”, “insidious” and many others that stained the perception of video games, perhaps irreparably. 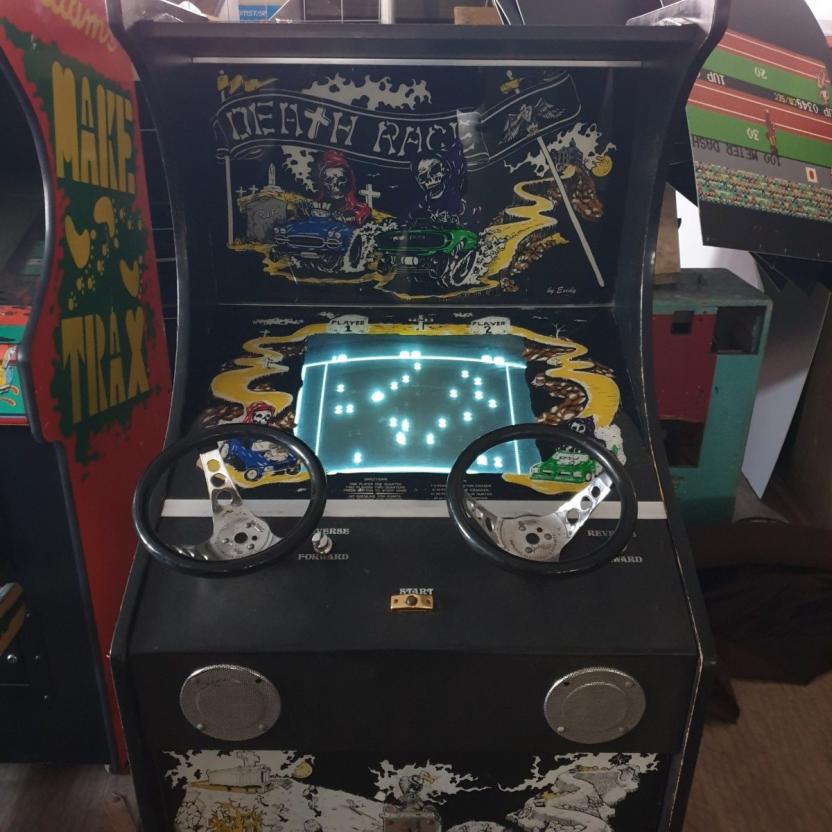 A controversial game that did not go unnoticed

The video games of the 70s were not exactly an impressive visual display like the current ones. Of course, the fun and the feeling of discovery were there. Death Race gained popularity among gamers at the time because its concept was equally simple and attractive: it allowed them to control a steering wheel and an accelerator pedal to drive a car, barely drawn with few white pixels. However, its real success was the product of scandal and morbidity around it thanks to dubious choices by developers, media coverage and sensationalism by politicians.

The problem with the game wasn’t the ability to drive a vehicle in an arcade that, with some imagination, simulated a real car, but the idea of ​​running over humanoid figures that left headstones as they disappeared from the screen. These elements became obstacles for the player, who had to demonstrate his skills to become an expert driver and score as many points as possible. You can watch a video below, courtesy of the Old Classic Retro Gaming YouTube channel.

A sector of society saw Death Race as a kind of murder factory, so Exidy used several publicity campaigns to clarify that the characters in his game were not people, but creatures popularly known as gremlins, which are capable of ruining the operation. of any machine, including cars. However, the idea of ​​him was not well received by the authorities, who in a short time warned about this “dangerous” video game, which supposedly encouraged losing control behind the wheel and running over people in real life. Does it sound familiar to you?

“About 9,000 pedestrians were killed last year and that’s no joke. It’s not fun. On television, violence is passive. In this game, a player takes the first step in creating violence. The player is no longer just a spectator. He is an actor in the making,” stated Gerald Driessen, manager of the NSC Research Department and a psychologist, who was concerned about the interactive factor of video games.

Driessen qualified his position on the Death Race players, but left the door open to a catastrophic scenario. “I’m sure most people playing this game don’t get in their car and drive towards pedestrians, but 1 in 1,000? 1 in a million? And I shudder to think what will come next if this is encouraged. It will be quite bloody,” said the psychologist.

These and many other similar statements caused a wave of panic with various consequences: businesses began to withdraw the game from their establishments, the press and politicians of the time began to stigmatize video games and, to the surprise of many, game sales. they fired. Death Race won the market and Exidy got the spotlight, but video games lost out to the public, largely because of a movie.

There is a very important detail about Death Race that is essential to better understand all the commotion it caused at the time. Exidy developed the game from Destruction Derby, the first racing title he released in 1975. He made some modifications to it and gave it a name inspired by Death Race 2000, a movie that was released that same year.

The film was truly scandalous because of its premise: the United States collapses and the United Provinces rise in its place. Various factions of rebels compete in the so-called Annual Transcontinental Race, a tournament where you race with armored cars. The objective is to run over the largest number of pedestrians and thus get the best score. Also, one of the runners has a secret plan: to assassinate the president of the United Provinces after winning the competition.

Death Race 2000 received harsh criticism due to its political component, but above all for its explicit and exaggerated violence. In its most emblematic scenes, modified vehicles are shown that overwhelm adults, the elderly, children and even babies alike, in bloody shots with touches of gore. For proof, a video with some of his most remembered scenes:

Exidy was not really a victim in this scandal, as he consciously decided to take advantage of the noise caused by the film to cause a stir with Death Race. To this he added an advertising campaign that further inflamed the spirits and a controversial design for the arcade, where 2 grim reapers are seen driving some cars in a cemetery.

The consequences were not long in coming: criticism and condemnation by public opinion at a time when the regulation of audiovisual content by age and entertainment was not fully defined for the cinema, much less for video games.

The sensation and morbidity also led Exidy’s customers to become interested in the arcade, which skyrocketed its sales to the chagrin of its detractors. For their part, politicians used it to gain moral approval among their followers through condemnation, marking a trend that was reinforced in later years. As if that were not enough, the media saw an irresistible source of readers in the controversy. The New York Times article is one of many texts that were published on the subject and, from then on, various video games were analyzed from an alarmist perspective in newspapers and magazines.

“Since then, the media and politicians have been in charge of turning them into one of their favorite scapegoats”

Phil Brooks, Exidy’s general manager, has come to Death Race’s defense on several occasions. He argued that the title was harmless and graphically non-violent. He even claimed that they could have made a really explicit game if they had put their minds to it.

“It’s like laughing at ourselves. None of us drive that well. He is making fun of our driving ability (…) We have one of the best artists in the business. If we wanted cars to run over pedestrians, we could have done it to curl your hair,” said the manager.

After all the pressure and many thousands of dollars earned, Exidy decided to stop the production of Death Race in 1977. However, he had a secret up his sleeve: Super Death Chase, a quite similar title that debuted that year and generated a wave of similar opinions. The company went ahead and closed its operations in 1996, after marking video games forever. Since then, the media and politicians have been in charge of turning them into one of their favorite scapegoats.

What did you think of this controversy? Do you know of any other controversy that has also left a stain on video games? Tell us in the comments. 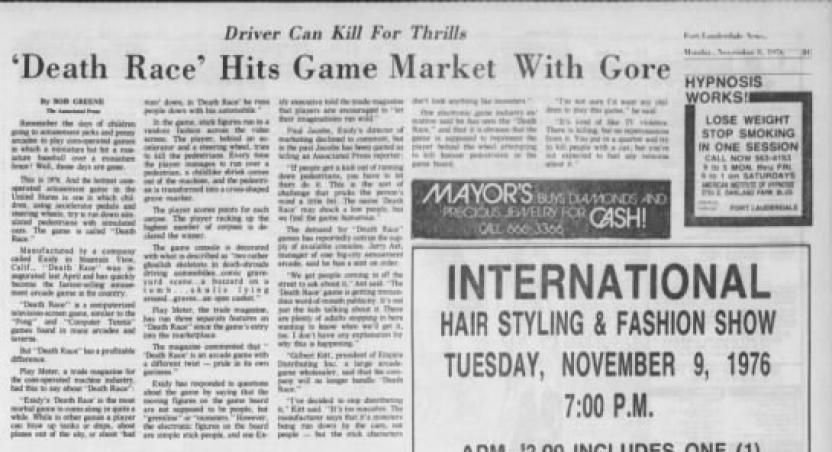 The media did not stop stigmatizing video games

Covid, WHO: “It continues to be a public health emergency”

Minister does not think a national ban on folding hammer is necessary: ​​”Is up to municipalities”