We always believed that these Roman coins were fake because their emperor did not exist. Now it turns out that yes

The official history does not record it, but it seems that a group of tomb raiders found a handful of Roman gold coins in Transylvania in 1713. There it began one of the most fascinating enigmas of the 3rd century, but we did not know. It was more than half a century later, while they were valuing the legacy of Baron Samuel von Brukenthal, that the executors found the coins and realized that, among coins of well-known emperors such as Gordian III or Philip the Arab, there was a coin of the emperor Esposiano.

The problem is that no one knew who this Esposiano was. There was no historical record, nor any indirect account that told us about him. The experts concluded that, despite the ‘military anarchy’ of the third century turning Roman history of the period into considerable gibberish, the coin could only be “very shoddy modern forgeries”. For decades it has been used, in fact, as a canonical example of historical fraud. Now we have just discovered that Espasiano did exist.

A fraud that… is real

At first, as I say, the coins were thought to be genuine. But as numismatics began to establish itself as a scientific discipline with its own entity, doubts grew. After all, we were talking about some roughly designed pieces and they contained some disorderly symbols and inscriptions. Finally, it seems that the idea that a Viennese expert (at that time the Austro-Hungarian Empire ruled over Transylvania) had attempted the operation of invent a new emperor and make August. Inventing an emperor from one of the most studied periods in history? Just how it sounds.

A couple of years ago, a researcher at University College London, Paul N. Pearson, heard about the story and, out of curiosity, wrote to the Hunterian Museum in Glasgow, where one of those Esposiano coins is kept. It was then that he met Jesper Ericsson, the museum’s coin expert, and together they decided to reopen the subject. This time, with a broad scientific analysis behind it.

The first thing that caught their attention is that they were made of real gold. To give us an idea, the value of the set (according to his estimates) would be 16,700 pounds. The hypothesis that an Austro-Hungarian ancient crafted this fraud was still on the table, but It is not usual for so many resources to be invested in a project of such a dubious entity (and which, later, as far as we know, did not take place).

So they looked in more detail using electron microscopy techniques, and to their surprise, the wear patterns on these coins were very similar to those on genuine coins. In addition, an analysis of its surface revealed a chemical composition compatible with having been buried for a long time. That is, the researchers realized that the pieces were too plausible to be false. But then, Is there really a Roman emperor we don’t know about? What exactly happened there?

Who could have been Esposiano? 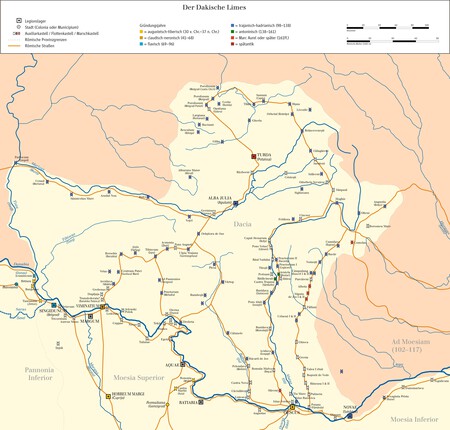 After thinking about it a lot, the researchers ruled out the traditional hypothesis. That is, that Esposiano was a failed usurper against the government of Philip the Arab and that, although his attempt failed quickly and did not leave much evidence, he had time to mint some coin that came into popular use.

What happened then? How can there be real coins from an emperor who didn’t exist? To explain the real existence of Esposiano, researchers have elaborated the “Dacia hypothesis”. It is well documented that Dacia (the Roman province that roughly coincided with what is now Romania) It was cut off from the Empire around 260 AD.. That is about 20 years after the death of Philip the Arab.

The chronicles speak of a population that “abandoned [la provincia] in an orderly manner towards the south, near the Danube”. But we know that this was not the case and that what is today the Romanian people continued to inhabit those regions under the yoke of other peoples. What if Esposiano was the military leader who assumed authority over the province Roman and established a local mint?

The most plausible explanation, the researchers explained, is that Esposiano “assumed the title of ‘imperator,’ supreme military commander.” At the time, the title “was reserved for the Roman emperor,” but it had not always been so. In fact, “there are other precedents for regional emperors. If we allow Roman emperors to identify themselves, he was a Roman emperor.”

The work has just come out and, although it has received very positive comments for the originality of the analysis of the coins, it has also aroused suspicion. It is an idea that fits with what we know, Yes; but what we know about post-Roman Dacia is very little.

As round as the explanation may be, and as interesting as the new data may be, it is a very bold hypothesis that will require further investigation. Be that as it may, it seems very likely that Esposiano was someone and, almost 2000 years later, “it has come back to life”.

They find an unused island in the files of Sonic Frontiers for Nintendo Switch – Ruetir.com

Jack Miller will race with the Ducati Panigale V4R in Australia

The Antipodes Map, shows where you would spawn if you dig straight down

That is gaming! Fan spent thousands of pesos to play ELDEN RING in a cinema | Level Up

Jack Miller will race with the Ducati Panigale V4R in Australia

112 news: Traffic jam on A1 due to accident near Hengelo

Creative: here are the best offers for Black Friday | Ruetir.com