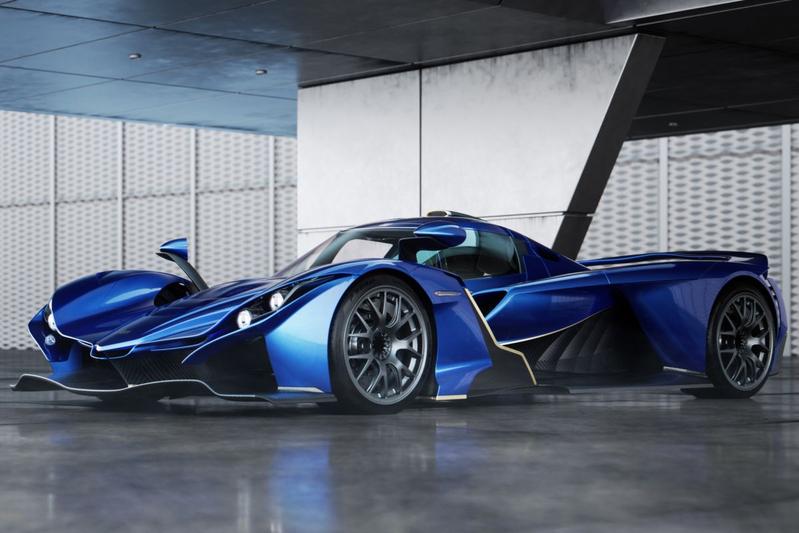 Earlier this month, the Czech company Praga Cars announced the arrival of a new supercar. That car has now been revealed and its name is Bohema. The Bohema is built around a full carbon fiber chassis and the body is also made of that material. The two-seater therefore weighs only 982 kilos. Those kilos are not set in motion by an electric motor, but simply by a 3.8-liter six-cylinder. That is not just a block, but in principle the machine that Nissan has been hanging in the GT-R since 2007. The 3.8 V6 equipped with two turbos has been taken care of by the English Litchfield Engineering and produces more than 700 hp and 725 Nm. Lichtfield, which normally also manages to extract powers above 1,000 hp from the 3.8 – gives the block a dry-sump system. This means that the car does not have a regular crankcase, but an external oil tank. The lack of a crankcase means, among other things, that the engine can be hung lower in the car. This in turn has a positive effect on the center of gravity, which is therefore a lot lower. Bohema, tested by none other than former F1 and Indycar driver Romain Grosjean, has a top speed of just over 300 km/h. At 250 km/h, the spoiler already generates more than 900 kilos of downward pressure. The Bohema is perhaps best described as a GT3 racer that you can also use on public roads. In addition, it also offers some comfort. We see that the interior – weighing only 38 kilos – is finished with beautiful-looking material. Praga also speaks of the presence of a 50-liter luggage compartment on both sides of the car. The extreme colossus is produced in an edition of only 89 pieces. Each copy costs at least €1.28 million. Oof.

Microsoft: Sony has more exclusives and they are better than ours | Level Up

Column | Our future is not going so well yet

Microsoft: Sony has more exclusives and they are better than ours | Level Up

Director Rian Johnson shares that he is playing Zelda: Breath of the Wild – Ruetir.com

Al Bano, the singer confesses: “I’ll give you a complaint”: what happened

Premieres to end the year: The best series of December 2022