For months, Turkey has been the focus of attention from the European Union and other Western leaders, and from the world press. Not so much because freedom of expression and the democratic rule of law are further crumbling, but because President Recep Tayyip Erdogan is widely seen as a crucial partner in the geopolitical force in the region as a result of Russia’s war in Ukraine. A role that fits the real politician Erdogan, but which is not without danger. Both for the democratic forces in Turkey itself and for the credibility of Western countries that pride themselves on the importance of a free and transparent society.

Miss Santing is a writer and journalist and board member of PEN Nederland.

The West’s attention offers Erdogan the opportunity to take full advantage of Turkey’s strategic location. To both condemn Russia’s war in Ukraine and not to sever ties with Russia. Not to denounce the annexation of Crimea by Russia as well as supply Ukraine with drones from its own factories and make plans with Moscow for Turkey as a future gas distribution center. Political analysts describe it as a delicate balancing act to which the Turkish president would have been condemned by the poor economic situation in his country.

If only it were that straightforward. Anyone who has followed Erdogan in the slightest over the decades will know that while his foreign policy is driven by domestic interests, the shockingly high inflation currently burdening his own citizens is not his main concern. Rather, that concerns his re-election in June 2023 as President of Turkey. The outcome is by no means certain.

And let Russia’s war in Ukraine and the attention it gets from the West now be an opportunity to prove to its own people that Turkey matters on the world stage. That their strong leader is being listened to – in Washington, Moscow, Berlin, Paris and Brussels. In fact, it even allows Ankara (NATO ally and on paper still an intended member of the EU) an exceptional position. While Western business faces one sanction after another over trade with Russia, Turkey is allowed to continue doing business with Moscow. 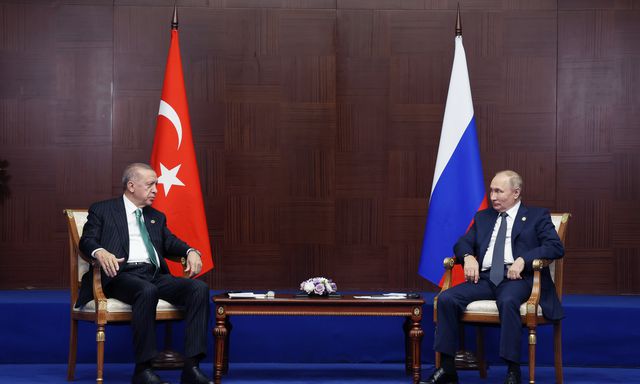 I saw how completely Kafkaesque that turns out last August when I drove down the only remaining supply route via Georgia to the high Caucasus Mountains in Russia, the so-called Georgian Military Highway. The mountain road that was much too narrow and broken in many places for international traffic was packed with trucks. Cast-offs from Russia, but also from the region and from Turkey. A striking number of trucks had a Turkish number plate. When I asked what he was transporting at the Georgian-Russian border town, a Turkish truck driver replied: “Construction materials destined for Moscow.”

At the end of September at the international congress in Uppsala, Sweden, of the writers’ organization PEN International, I experienced another alarming corollary of the space that Erdogan is being offered to use the war in Russia in Ukraine for his own benefit. Sweden and Finland want to join NATO. Ankara is particularly opposed to Sweden’s membership. According to Turkey, Stockholm gives PKK supporters all the space they need. Sweden has so far refused to extradite Kurds who would have been active for the Kurdish PKK. NATO expansion is still in the air.

At the conference, delegations from Sweden and Turkish Kurds expressed concern that there is a lot of unrest among Kurds in Sweden, including those who have been naturalized. “Many a Kurd who has fled to Sweden,” said a Turkish-Kurdish poet with emotion, “has only been able to learn the Kurdish language there. In Turkey itself, that freedom is lacking.”

Of course Turkey is an important strategic partner on the eastern flank of Europe, but isn’t it given too much leeway? Isn’t the pragmatism of the West at the expense of democratic values ​​such as fair and free elections, a pluralistic press and independent justice? For the portion of Turkish voters who do not vote for Erdogan, the answer is clear: yes. Their main concern is that he wants to win the elections at all costs and that they will not be fair next year. Both the run-up to it and the elections themselves. Again they are stuck for years with an authoritarian leader who mistrusts the West. A Turkey that is not their Turkey.

NRC has calculated on the basis of internal documents from the Immigration and Naturalization Service that the number of asylum applications from countries such as Syria and Afghanistan, but also from Turkey will increase further next year. As long as the West’s attention is not also focused on Turkey’s democratic recovery, it is guaranteed not to tumble out of the top three countries with the most asylum applications.

A version of this article also appeared in the newspaper of November 3, 2022

Aidsfonds: HIV epidemic worsens due to lack of money and political unwillingness

F-16s between the holiday homes: a lovely Danish island on the frontline of the new Cold War

Column | 400 million Egyptians along the banks of the Nile

Column | The climate summit is not necessary every year

Assassin’s Creed Invictus is real; will be a multiplayer of For Honor devs | Level Up

Morgan Super 3 review: does the tricycle remain fun with a three-cylinder?