UNCHARTED: Legacy of Thieves Collection, was launched on October 19 on Steam and the Epic Games Store, which according to Iron Galaxy Studios, who are the creators of the port, is an experience offered by the award-winning developer Naughty Dog and fully optimized for PC.

Versions that many players who bought the game even in its presale, will not be able to play even though they believed in theory that their teams met the requirements. This is because among the official list that can be seen on Steam, it asks for at least 8 GB of memory RAM, an NVIDIA GTX 960 (4 GB) or AMD R9 290X (4 GB) graphics card and also an Intel i5-processor. 4330 or AMD Ryzen 3 1200.

You can read: Crysis Remastered Trilogy will arrive on Steam on November 17 and its price will be $49.99.

And it is in the latter where many have fallen into confusion since, although it is not explicitly commented, the game needs a processor that has avx2 technology, present in 4th generation or older CPUs. Technology that is an instruction used to tell the processor how it should handle the data that arrives, depending on the type of data, giving it a greater management capacity.

Something that can be read in the 4330 that accompanies the i5 of the minimum requirements that, as many will know, says that the processor is fourth generation to start with a 4, but that many gamers apparently did not know or that they did realize but overlooked, not knowing that the game wouldn’t run because it didn’t have an avx2 processor. Blockage that cannot be avoided since when trying to run the game, an error appears saying that the processor does not meet the minimum requirements and the game definitely does not open.

This has led many players to start claiming on the Steam forums first, because the developers have not given the explicit warning and second, asking for the opportunity to disable this. Something that has happened with other games that initially asked to have a processor with avx2 and then have given the option to disable or have removed the block when trying to run the title. 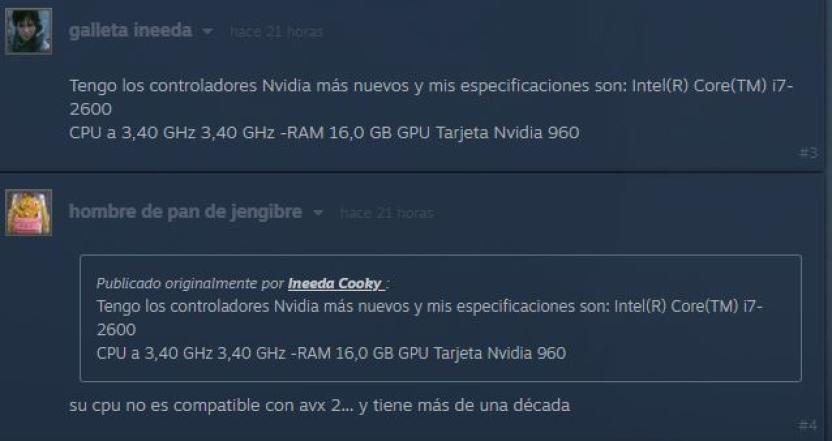 Although also, there have been publications of those who mock or directly insult those who have processors from more than a decade ago, like this one (which was deleted) that calls them “late PC Master Race stingy” and that they are “even worse than consolers because at least consolers have an excuse for their hardware to be $%&#”, further saying that “there is no excuse for a capable adult in a first world country to have a pc $%&#”. 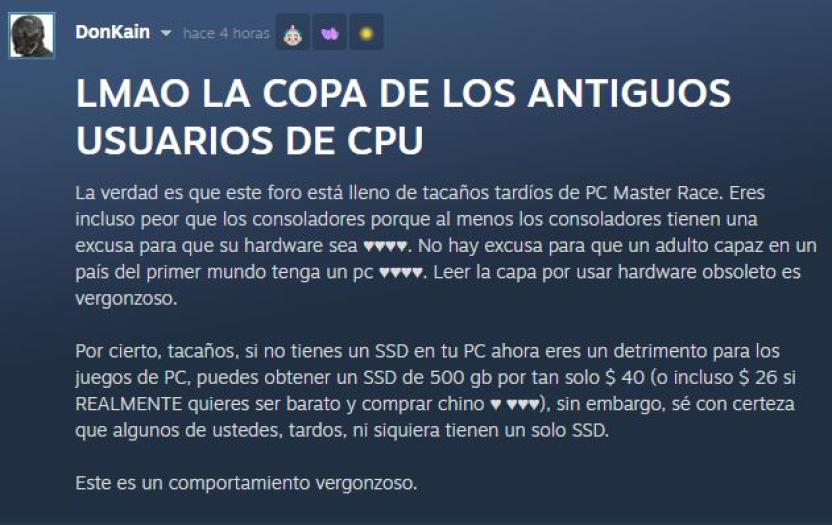 Anyway, there are already some who hope that this will be solved in an upcoming patch and players who, in theory, have gaming PCs that exceed the minimum performance, cannot even run the title because they have processors from older generations.

FIFA 23: Legacy Edition has been temporarily discounted on the Nintendo Switch eShop – Ruetir.com

Masahiro Sakurai calls for visibility for all members of development teams in the industry – Ruetir.com

God of War Ragnarok is Time’s Best Game of 2022 | Ruetir.com

Lewis Hamilton devastated by the death of little Isla

Al-Dawsari, the Arab Messi who knocked Messi down with a goal… against Messi