Believe it or not, the pushers at Mercedes are already close to their first electric deadline. This year, the Stuttgarters wanted to have a current model in the catalog in every segment, and count it: they have the EQA, the EQB, the EQC, the EQE, the EQS and even the EQV. Only the EQT is still missing, but that does not prevent Mercedes from already expanding within the segments. For example, after the EQS, the EQE is now accompanied by an SUV derivative.

We do not mention the EQS SUV there by accident, because it is immediately clear where this smaller copy has come to get its inspiration. For example, the EQE SUV takes on the same kind of raised teardrop shape with a super-smooth body. On the back we see a continuous LED bar in the same style, although there are a few extra nods incorporated in the design. The same goes for the front, which of course has the recognizable Black Panel face with closed grille, but still gets slightly sturdier, perhaps more handsome headlights than the EQS SUV.

We also find few surprises inside. This is not only due to the fact that Mercedes already gave unlimited insight into the cabin about two months ago, but also to the fact that the interior hardly differs from that of the regular EQE, which in turn was already based on that of the EQS, where it can be seen in almost identical form in the EQS SUV… So we can be brief: in the front you will either find an individual driver display and an upright 12.3-inch touchscreen, or you can have your dashboard draped at an additional cost in Mercedes’ MBUX Hyperscreen that fuses three screens into one. You also get good-looking materials and five comfortable seats — because the third row of seats leaves this EQE SUV in contrast to the EQS SUV omitted.

While the appearance mainly lends itself to the EQS SUV, we recognize more EQE under the skin. The range of the high-legged variant starts — for the time being — with the EQE 350+, while the sedan received a weaker 300 version a little after its launch. As 350+, the EQE SUV has 292 hp and 565 Nm of torque, which are sent to the rear wheels via a single electric motor. The four-wheel drive variant, the EQE 350 4MATIC, gets the same power but does increase the torque considerably to 765 Nm thanks to an extra electric motor on the front axle. The top version of the EQE SUV is just like its lower brother, the 500 4MATIC, with 408 hp and 858 Nm of torque on all four wheels. 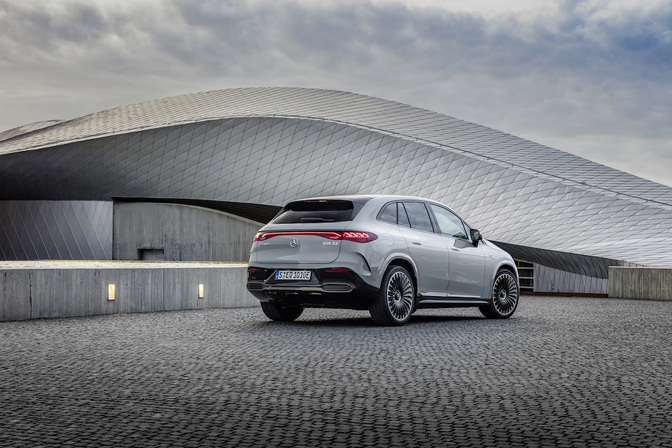 Then we are talking about the regular versions, because in addition, the Germans also immediately launch two AMG variants. That starts with the EQE 43 4MATIC SUV, which also draws 858 Nm of torque but 476 hp from its two electric motors. Above this is the EQE 53 4MATIC+ SUV, with 625 hp and 950 Nm of torque in basic form and with the optional AMG Dynamic Plus boost package even 687 hp and 1,000 Nm of torque. This also probably sounds familiar to fans of the EQE-without-SUV, although the 0-to-100 times suffer a few tenths from the less optimal aerodynamics: the 43 version does that sprint in 4.3 seconds and the fastest 53+ in 3.5 seconds.

However, the EQE SUV remains an EV, and the battery side of the powertrain is also worth mentioning. However, Mercedes remains bizarrely vague about this, because nowhere do they mention the battery capacity of the regular EQE SUV versions. They do that for the AMGs, and they both appear to have the same 90.6 kWh battery as the low EQEs. They also do fast charging up to 170 kW, with which they can recover 170 kilometers of driving range in fifteen minutes. We expect that the weekday versions of the EQE SUV will have the same battery and fast charging technology, because their driving range is not too different from that of the regular EQEs. For example, the most economical, the EQE 350+, can drive a maximum of 590 kilometers on a full battery. 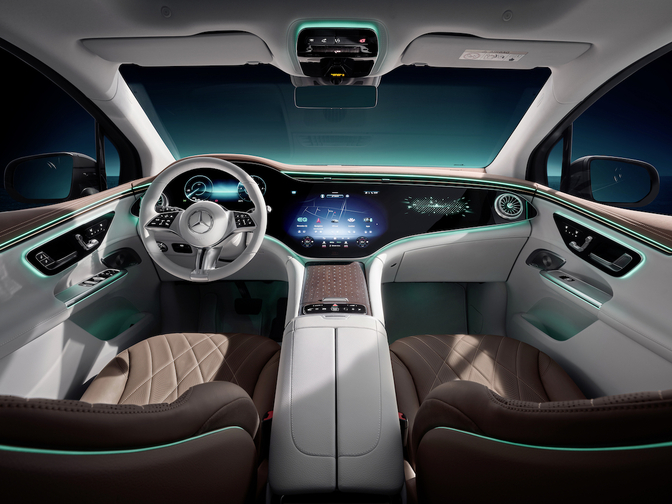 We already talked about that Hyperscreen, but the EQE SUV gets a lot of other — sometimes optional — technology. For example, the AMGs have AMG Ride Control Plus with adaptive dampers and a steering rear axle as standard, which you can also have on your slower EQS SUV for a fee. We don’t know yet how much you’ll have to pay for all that. The first copies should be delivered early next year, after production starts in December this year at the American Mercedes plant in Tuscaloosa, Alabama.

Is Elon Musk taking over Twitter or not? ‘This soap deserves a series on Netflix’

The controversial gains of the McKinsey method

Is Elon Musk taking over Twitter or not? 'This soap deserves a series on Netflix'

Which television stations will broadcast the Cruz Azul matches for the Clausura 2023?

Citizenship income will be replaced by subsistence income, that’s what it is