Even a rugged brand like Jeep cannot escape it: the combustion engines have to be removed within this and a good decade. Instead of fighting against it, the Americans decided to embrace it, because Jeep wants to be a 100% electric brand in our regions by 2030. For that, it can rely on the expertise of its new mother house Stellantis, as witnessed by this Jeep Avenger .

You wouldn’t say that from the outside, because the Avenger takes the existing Jeep house style to a new level. For example, you recognize the lines of, say, the Compass in the front, but that is thanks to the deep headlights, darkened taillights and – not to forget – the rear door handles that Alfa Romeo-like are hidden a bit more modern for the day. That certainly applies inside, because the dashboard is downright minimalist, unlike almost all other Jeep models. For example, the ventilation grilles are incorporated in one continuous bar, a 10.25-inch infotainment screen floats over it and you control the powertrain with a series of simple buttons so that an absurd amount of storage space remains in the center console.

The first electric Jeep is therefore idiosyncratic, although many of the figures are still familiar to us. For example, the Americans promise a single electric motor on the front axle, good for 156 hp and 260 Nm of torque. The battery is again 54 kWh, and the Avenger should get an average of 400 and in the city even up to 550 kilometers of driving range. Fast charging is also possible up to 100 kW, which charges the battery from 20% to 80% in 24 minutes. And if you thought you were reading an article about the recently revamped DS 3, we don’t blame you: we would also have sworn that the Avenger would not – as promised – be on the new STLA platform, but it would. is still on the e-CMP platform… Jeep is not confirming anything about that at the moment.

Front wheel drive for the terrain

All that makes this Avenger — for the time being — exclusively front-wheel drive, although Jeep promises that it will hold its own on unpaved terrain thanks to a Selec-Terrain system. This offers various pre-programmed settings that adapt to the surface, such as a Mud or Snow mode. In addition, the EV features Hill Descent Control for descending hills unscathed, and the suspension is Jeep-typically high with a whopping 20 inches of ground clearance. However, the rest of the dimensions are less recognizable, because at just 4.08 meters in length, the Avenger is another 16 centimeters smaller than the Renegade. Nevertheless, the compact SUV should still have a nice 380 liter boot volume. 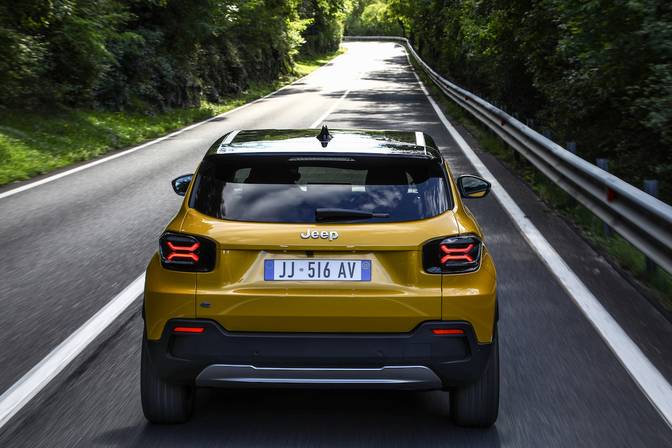 The Avenger is the first of four electric models that Jeep plans to introduce to the European and North American markets by the end of 2025. Reservations for the packed First Edition of the EV open today, and the car should reach its first buyers early next year. We still have to wait for a Belgian price, although we will probably report more about this soon.

Veron criticizes women’s football: “The ball is a company and as such it must produce income, otherwise …”

Tamara Wilson: “I dare to be imperfect now. We are singers, not brain surgeons’

Why does your car use more fuel in winter? – Ruetir

A one-year-old child dies: the parents did not think it was meningitis

Historical: Faker qualifies for his fifth final with T1 in Worlds the League of Legends World Cup | Ruetir