Lung cancer, a blood test identifies who to screen for

by Ruetir
in Health
0 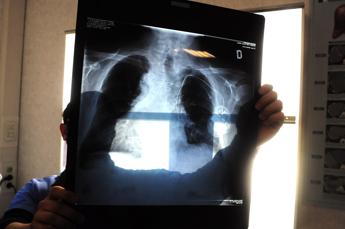 In our country, according to the Italian Cancer Registries Association (Airtum), lung cancer, with almost 40,000 deaths, is the leading cause of death from cancer in men and the second in women. The high mortality is due to the fact that the tumor, in most cases, is discovered when it is already in an advanced stage. Identifying it early is not easy. However, thanks to research, it is possible to intervene earlier and better to prevent its onset. Researchers from the MD Anderson Medical Center in Houston (Texas), one of the most important cancer centers in the world, have developed a new system to identify who is most likely to develop cancer, combining liquid biopsy with an evaluation model. of the individual’s history, such as age and exposure to smoking. This is what is reported in an article published in Aleati per la Salute (www.alleatiperlasalute.it), a portal dedicated to medical-scientific information created by Novartis.

Cigarette smoking, remember, remains the most important risk factor: there is in fact a clear relationship between this habit and the disease, and this also applies to exposure to passive smoking. The more you’ve smoked, or the more smoke you’ve breathed in your life, the more likely you are to get sick. In our country, Airtum estimates speak of 40,800 new lung cancer diagnoses in 2020 (27,500 in men and 13,300 in women), which represent 14.1% of all cancer diagnoses in men and 7.3% in women . Thanks to a blood draw and a predictive model of the risk of developing lung cancer, it is possible for Texan scientists to identify people at risk better than the current selection criteria established by the US Preventive Services Task Force earlier in 2013 and then in 2021.

In the US, screening for lung cancer is a custom: once a year all people between 50 and 80 years of age who are smokers (or former smokers, who have quit for less) are invited to undergo CT scan with a low dose of radiation. 15 years), with a history of using at least 20 cigarettes per day for 20 years. However, according to the Houston scientists, it is possible to improve this selection criterion. In their study, published in the ‘Journal of Clinical Oncology’, they developed a personalized lung cancer risk assessment test that analyzes 4 markers present in the blood and another risk model that takes into account age and years of addiction. from cigarette smoking (called PLCOm2012). The new system (collection and PLCOm2012 model) was tested in 1,299 blood samples collected before cancer diagnosis and in 8,709 samples from people who did not develop cancer. In this way, the researchers identified 9.2% more lung cancer cases with annual screening (among people who smoked 10 or more packs of cigarettes / year) and reduced referrals by 13.7%. further tests for false positives.

“Lung cancer screening is not readily available in most countries,” says study author Sam Hanash, Professor of Clinical Cancer Prevention, head of the McCombs Institute for the Early Detection and Treatment of Cancer at MD Anderson Medical Center – Hence the goal of developing a blood test that can be used earlier to determine the need for screening and make lung cancer screening much more effective. Our study shows for the first time that a test of blood could be helpful in determining who can benefit from lung cancer screening. The results tell us we are on the right track to making early detection more effective. ”

When the Houston researchers started working on a blood test, “there were many different types of markers,” Hanash points out. robust, which was the guiding principle of our research “. To test the combination of blood markers with the PLCOm2012 model, the scientists analyzed more than 10,000 biospecifics from the Plco study, including 1,299 blood samples collected from 552 individuals who developed lung cancer and 8,709 samples collected from 2,193 people who did not. they developed lung cancer.

The complete article is available on: https://www.alleatiperlasalute.it/alla-scoperta-di/cancro-polmone-test-del-sangue-sapere-chi-sottopose-screening.

Bills, goodbye reminder: on the 41st day of arrears, the detachment of the meter

Nedved and the fundraiser for the new Juventus coach, Lotito responds to Sarri: Audiogol is back

Monkeypox, WHO changes name to avoid discrimination and racism

AIDS, Bassetti: “Today it is manageable, young people use condoms and get tested”

Nedved and the fundraiser for the new Juventus coach, Lotito responds to Sarri: Audiogol is back

This is how the Pokémon x Puma shoes inspired by Gengar look – Ruetir.com

Nintendo Japan launches a total of 6 new promotional videos for Switch for this Christmas – Ruetir.com