The most important news in recent days has undoubtedly been the data hack of the expected GTA 6, with which almost 100 videos of the video game that is still in development were leaked. And after it became known that Rockstar Games took measures to delete files due to copyright claims and request the closure of forums, now it has revealed that the main suspect of the massive leak has been arrested. 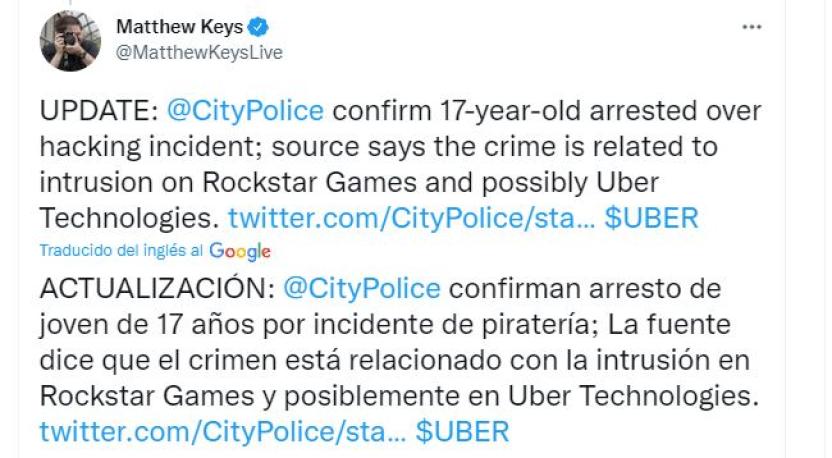 As reported by the london policeEngland, a 17-year-old man was arrested overnight Thursday, “on suspicion of hacking, as part of an investigation supported by the @NCA_UK (National Crime Agency) National Cyber ​​Crime Unit (NCCU).”

Something that had been advanced by the industry insider @LegacyKillaHD, who on September 19 had published on his Twitter account that he was a 16-year-old boy from the UK, and that: “An administrator of an online hacker forum claims that the person behind the GTA 6 and Uber hacks is none other than the leader of the Lapsus$ ransomware gang.”

For now it has not been possible to confirm this since the police have not provided more information about his identity and about the investigation that ended in his capture, confirming only for now that the young man remains in their custody.

You can read: Grand Theft Auto 6 hacker claims to have details of Bully 2, and is being investigated by the FBI

A news that in a way also confirms several rumors that had circulated during this week, which indicated that the person who hacked the Rockstar Games databases and leaked the information on GTA 6, could be a minor. Theories that were based on the fact that when offering the data in exchange for money and as extortion, the alleged hacker mentioned on more than one occasion that he could not continue some conversations because he was at school.

Splatoon 3 players are being accused of cheating and abuse of special weapons - Ruetir.com

Liga MX: Unusual! Referee would have lied to get liposuction

Chivas: Travel to Los Angeles to meet again with “Chicharito”

James Caan, actor who played Sonny Corleone in The Godfather, has died at the age of 82