Metalworkers ready for mobilization. “It will be a difficult autumn” 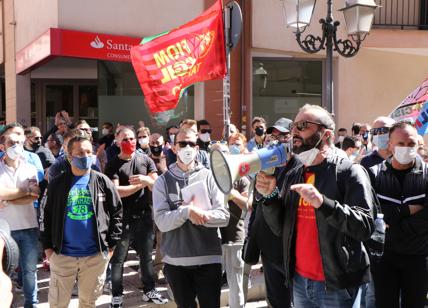 De Palma, Fiom general secretary, promises: “It will be a fight”

Crisis industrial, ecological transition, inflation, political uncertainty: for the metalworking industry, “which is already showing signs of slowing down”, a difficult autumn is expected.

Do not labor unions they do not intend to stand by and are ready to mobilize. The leaders of Fim, Fiom and Uilm say this to the AGI, convinced that the country’s priorities are employment (but not precarious) and the defense of the purchasing power of wages.

Michele Palmgeneral secretary Fiom, assures that the metalworkers with their struggles are ready to “defend the legality and dignity of the country in front of multinationals and investment funds without any social scruple”.

A campaign of assemblies will start in September, in view of the mobilization in October together with the CGIL. Roberto BenagliaFim Secretary General, calls for a close confrontation with the government and businesses on wages: “we need to move from a policy of bonuses and a policy to support wages, which must be higher”.

According to the leader of the metalworkers of the Cisl, there are “industrial crises that have now become historic and new disputes, but the whole sector is slowing down and must face the ecological, digital and demographic transition”. “We cannot risk that the metalworking industry is abandoned to itself just when things are no longer going very well”.

The picture of the disputes is wide and concerns the whole Peninsula, from the Wartsila of Trieste to the Sicilian Steelworks. But in the middle there are Qf (ex Gkn) of Florence, Acc of Belluno, Ansaldo Energia of Genoa, ex Whirlpool of Naples, JSW of Piombino, Supermonte of Lecce, Termini Imerese of Palermo, Dema of Brindisi.

And then, the companies put in crisis by the ongoing conflict between Russia and Ukraine, such as Superjet International; and again, the logistics sector of Stellantis di Melfi and finally, the historic dispute of the former Ilva of Taranto, with 3,000 workers on layoffs; the decree Aid bis it has allocated 1 billion but according to the unions there is no clarity about the future. To all this is added the entire automotive sector which has to deal with the ecological transition.

So far, he says Palombellagovernments have put in place “containment tools, such as the cig or solidarity contracts, temporary measures that sometimes only serve to lengthen the agony of companies. Of course, without these actions a catastrophe would have occurred, but the people in the meanwhile they are impoverished “.

The prospect is that “September will hold other negative surprises; disputes will be added that risk causing the situation to explode. Not to mention that the expensive energy, theinflationwages at very low levels cause a social drama “.

Il trade union has already planned a series of initiatives, starting with the demonstration on 3 September for Wartsila in Trieste.

“But we will not stop – assures Palombella – We are tired of broken promises “.

Gas, Eni: “Methane flows from Russia to Italy are zero”

Bills and inflation: crack at the table of 575 billion. Agribusiness ko

Banca Generali to Mediobanca in the Guggenheim operation. The knots of the deal

Chain of cinemas will offer tickets at 6 soles

The price of Switch will not go up for now, according to the president of Nintendo

Banks return to lend money: in 2021 an additional 27.1 billion was disbursed

Antonella Clerici and Vittorio’s words that everyone likes