There are already cars incorporating CO2 absorption technology while driving. And it makes perfect sense

Although the category applied by the DGT for an electric car is zero emissions (even for the very doubtful PHEV), the truth is that these types of cars, until now, continue to generate carbon emissions. A problem that the Eindhoven University of Technology has set out to solve.

At the moment, there is a strong debate about the extent to which electric vehicles are less polluting than combustion vehicles. Some manufacturers, such as BMW with its BMW iX and BMW i4 or Volkswagen with its Volkswagen ID3, claim that their cars are carbon neutral. Others like Volvo do establish differences depending on the origin of the electricity that drives them, although they assure that their C40 Recharge is more sustainable than a combustion model from 110,000 kilometers (in the worst case).

As an even more ambitious solution, the Eindhoven University of Technology has developed the ZEM, a prototype electric car that traps CO2 from the air as it travels down the road. In other words, this prototype is not only neutral in carbon emissions, it can even reduce and improve air quality during its operation. 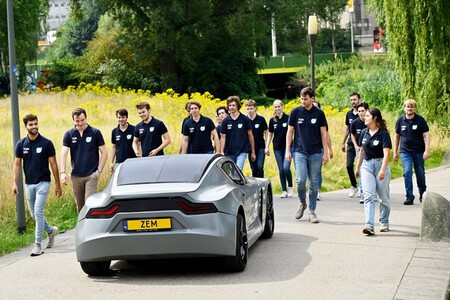 ZEM, the car to which the CO2 comes out to return

If the manufacturers made a declaration of the CO2 generated as citizens do the income tax return, the ZEM would get emissions to return. The secret is in a grille on the front that allows CO2 to be captured as the air passes.

At the moment, its recovery capacities are limited, but it must be taken into account that it is only a first step in a technology that is yet to be developed. A filter allows capturing up to 2 kg of CO2 for every 20,600 kilometers traveled at 60 km/h. The idea is that these filters can be completely cleaned every 320 kilometers using the stops to recharge. In the recharging station designed, the CO2 becomes stored to give it a second use.

This is not the first time we have heard of a vehicle that cleans the air of CO2. Just over a week ago, my colleague Carlos Prego told us the story of a project that aims to incorporate wagons into trains to capture CO2 in the atmosphere, taking advantage of existing railway lines.

Although, obviously, the current CO2 absorption capacity is much smaller than in a train, the student developers of this project assure that the advantage of this system is its implementation on a large scale and that many grains of air make a mountain.

In addition, this small electric car, its engine is 22 kW (29.5 CV) and has nine 2.3 kWh modular battery packs, it has also been designed with the aim of reducing CO2 emissions as much as possible during its manufacturing. Therefore, the bodywork is built on recycled plastics. For example, glass has been replaced by polycarbonate, as it is considered less polluting in its manufacture.

Free PS4 and PS5 games in September 2022 for PlayStation Plus Essential, Extra and Premium