Taiwan is already preparing its defense against a hypothetical Chinese invasion: TSMC would paralyze its factories

The possibility of China invading Taiwan has been on the table for many years. The American intelligence service assures it, and this possibility is also considered by Mark Liu, the general director of TSMC. The CIA assures that the instability triggered by the invasion of the territory of Ukraine that Russia began on February 24 can be used by China to invade Taiwan for the next few years.

Let us hope that this conflict does not occur, because, if it did, its human cost would be enormous and its impact on the global economy it would be monumental given that Taiwan occupies a central position in the semiconductor industry. Mark Liu has addressed this issue during an interview broadcast by the US network CNN, but he has done so calmly and without being carried away by alarmism.

Even so, it is clear that both the US discourse and Liu’s are intertwined undeniable political interests. And we must not ignore them. At the current juncture, there is no doubt that it is good for the United States to raise the specter of a possible invasion of Taiwan by China. And, on the other hand, TSMC’s warning responds to a strategy that seeks to exert international pressure to activate the mechanisms that stop this hypothetical invasion.

“We would all lose. No one would be victorious. We Taiwanese have chosen to be governed by a democratic system. We want to choose our way of life, and we believe that chip manufacturing is a key sector in Taiwan’s economy. Still, if China were to invade, semiconductors would not be our primary concern. It would be the fact that this event would destroy the world order».

These words by Mark Liu describe the consequences that, according to this executive, the invasion of Taiwan by China would have. The most serious problem would be its unavoidable human cost, which would possibly be difficult to assume. But, as Liu asserts, the geostrategic impact to have an event like this all over the planet would be colossal. And furthermore, there is no doubt that the semiconductor industry would take a hit from which it would be hard to recover.

Semiconductor factories are complex and highly advanced facilities. If one of them is isolated from the rest of the planet, it will be inoperative

According to Visual Capitalist TSMC hoards no less than 54% of the market of the chips. The figures from other consultancies do not differ much from those published by this medium, so we can assume that this quota fairly accurately reflects its relevance in this industry. In fact, this company manufactures for Apple, NVIDIA or Qualcomm, among many other companies. It even produces for Intel.

It’s a fact: TSMC is the largest and most relevant manufacturer of integrated circuits on the planet. UMC is also Taiwanese, and it’s important, but its 7% market share is a long way from TSMC’s 54%. If China were to invade Taiwan there is no doubt that would try to take control of the latter company, but, according to Mark Liu, “no one can control TSMC by force”. 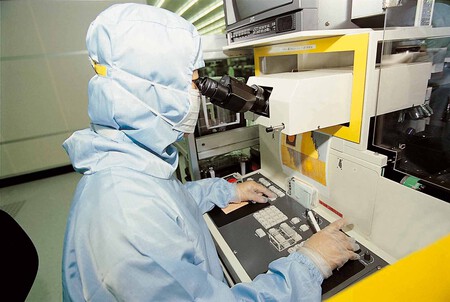 This executive assures something that all of us who keep track of what happens in the semiconductor industry know: semiconductor factories are facilities complex and highly advanced. If one of them becomes isolated from the rest of the planet and no longer has access to the raw materials, chemicals, hardware components, and engineering tools it needs, it will be rendered inoperable.

TSMC has production facilities outside of Taiwan. It has factories in China (in the vicinity of Shanghai and Tianjin), and also in the United States (in the state of Washington). In addition, in 2024 it will start chip production at the factory in $12 billion that he is already fine-tuning in Arizona. And it is possible that it will not take long to start the construction of a new plant on European soil. Even so, if the factories that this company has in Taiwan, which are the most important, fall, TSMC will fall.

Amazon prepares a new Prime Day in two weeks, sign up to know in advance the best offers

Deathverse: Let It Die should now appear in autumn • Ruetir

5 things that would make Scarlet and Purple the best Pokémon

From “I’m not stupid” to “what if you are?”: about the abusive lots and packs with the new consoles

IMF: Global Current Account Balances Would Expand Due to War Between Russia and Ukraine

Marina, Roberta, Emilio and Carlos, the semifinalists of Aitana’s team