NFL: Lewis Hamilton is the new member of the Denver Broncos

Seven-time Formula One champion driver (F1), Lewis Hamilton, has decided to expand his interests within the sports world. Proof of this is that this morning it was reported that the driver of the Mercedes team is part of the Denver Broncos partner group.

The team of NFL reported this through a statement in which they assured that they are happy for their integration into the franchise:

“We are delighted to welcome seven-time Formula One World Champion Sir Lewis Hamilton to our group of owners. He is a competitor and a champion who knows exactly what it takes to lead a winning team.”

In the statement, the Denver team also says it recognizes that Hamilton is a “strong advocate for equality, even within his sport. With more than 100 victories, Lewis is considered the most successful driver in Formula One of all time.” His resilient spirit and standard of excellence will be a tremendous asset to the Broncos squad and organization.”

The franchise of Denver Broncos of the NFL is one of the most popular in Mexico. He has won the Vince Lombardi Trophy three times and now he will seek to repeat this feat, hand in hand with his new Quarterback, Russell Wilson and with the support, from the direction and decision making, of Lewis Hamilton. 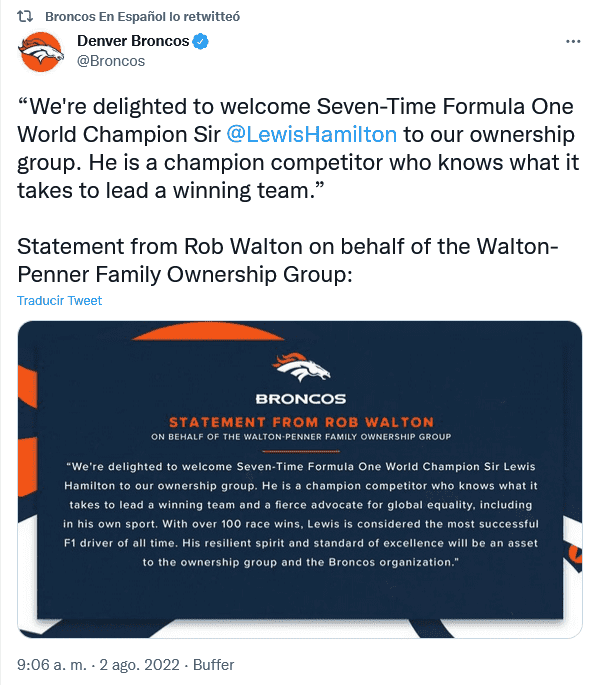 The cream of Mexico in MLB

Reasons to include cherries in your diet

Xbox Game Pass in August with Two Point Campus, Ghost Recon and these other games • Ruetir

Mortal Kombat (1995) is the most popular movie based on video games in Chile, Argentina and Brazil | Ruetir

Mps towards the increase, Axa-Anima on pole: between 5-10% of the capital will arrive