Formula One is about to enter its summer break, but before that it has one last chapter in store for speed freaks.

The Hungarian Grand Prix will be held tomorrow at the Hungaroring, with the need for Ferrari to recompose their spirits, for Sergio Pérez to return to the podium and for the Mercedes team to show that their comeback is a reality.

During the first free practice sessions, the drivers of the Maranello team gave an example of the great adaptation that their single-seater has to this track, since Charles Leclerc was the fastest in the second session setting a time of 1:18.445. His partner, Carlos Sainz, got into third place with 1: 18.676 while, aboard his McLaren, Lando Norris had the second fastest time with 1:18.662.

For their part, the Red Bull drivers were not at their best pace and Max Verstappen himself acknowledged that it will be very difficult for them to beat Ferrari on a dry track.

“I think it will be difficult for us to get over that (to the Ferraris). But I think overnight we will try to close the gap as much as we can and see what the weather brings tomorrow (today) as well… I think in the dry. we can’t compete, so maybe with rain we can, who knows?” said the Belgian.

The Hungaroring track is one of the most demanding tracks in Formula One thanks to the high aerodynamic load to which it subjects the single-seaters, especially in the long curves of the track.

Secondly, It only has a long straight where the overtaking options are real, but the braking of that sector also demands a lot from the car.

After Hungary, vacation. And from the last of August, there will be three race weekends in a row: in Spa-Francorchamps (Belgium), Zandvoort (Netherlands) and Monza (Italy), home of the last European round of a championship that will close on the 20th. November in Abu Dhabi.

state of the championships

Red Bull leads the Constructors’ World Championship ahead of Ferrari (396 points against 314). Mercedes (with 270) is getting closer to the Italians. 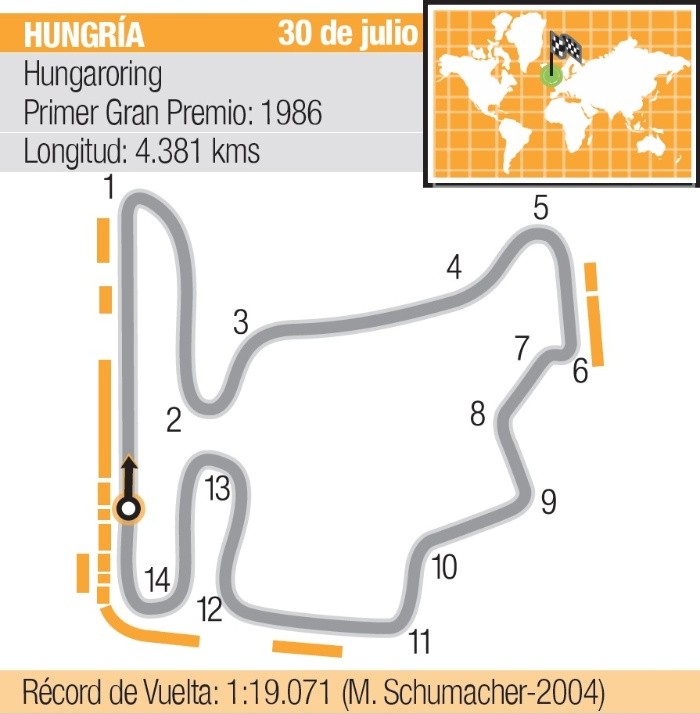 The Hungarian track is an “old school” circuit where, due to the few overtaking opportunities, the result of today’s qualifying could be decisive for the definition of tomorrow’s race.

11 wins has McLaren, being the team with the most wins in Hungary.

240 points has been achieved by Lewis Hamilton in the event, being the most productive driver.

Sergio Pérez is optimistic for the rest of the weekend

The man from Guadalajara, Sergio Pérez, set the ninth time yesterday in the second practice session of the Hungarian Grand Prix and despite the result, he remains optimistic for the rest of the weekend.

“We tried different little things to feel comfortable with the car and I think we have a good idea and understanding of things, so hopefully tomorrow (today) we will be able to show what we have learned.” explained Pérez, who had a time of 1:19.397 as his best time of the day at the Hungaroring.

“That should be extrapolated both at high and low fuel paces; and I am relatively optimistic for the remainder of the weekend.”

However, Checo himself recognized the advantage that the Ferraris have.

“It is clear that they seem very strong,” he said. “They are very fast, but if it rains tomorrow (today) things can mix up a bit and we can be up there with them. We have to try to fit everything into qualifying; and that is what I hope for”, said the rider who is third in the championship.

Steam Deck: Valve wants to process all reservations by the end of the year • Ruetir

The first two monkeypox deaths outside of Africa - Ruetir

The 15 strongest Pokémon of the fourth generation – Ruetir.com

Carnivorous cockroach thought to be extinct since 1930 found in Australia