Starship: dates, plans and everything we know about the largest rocket ever developed

If Mars is the great goal of this century’s space race, Starship is the great promise to make it a reality. The ambitious project of Elon Musk and Space X has been in the world’s imagination for almost 20 years, but only now it looks like it’s going to come true.

But the importance of Starship goes far beyond Mars. It is, although it may not seem so, the beginning of a new era of space exploration.

When will Starship launch?

That is the big question and the truth, at this point in the game, is that nobody knows. If we look at the statements of both Musk and the company, the date of that first orbital flight has only been delayed. The latest forecasts spoke of summer 2022, but the recent explosion a few days ago has called everything into question.

What was the problem? Apparently, cryogenic fuel. Lifting 100 metric tons of metal isn’t easy, and to pull it off, the Super Heavy and its 33 Raptor engines require liquid cryogenic propellants or propellants. Their fundamental advantage (in addition to the space they save) is that they offer spectacular boosts compared to other alternatives. However, “it is an added challenge, as it evaporates and creates an airburst hazard in a partially oxygen atmosphere like Earth’s.”

What exactly is Starship?

Since at least 2005, Space X has been working on the idea of ​​the ‘BFR’ (‘Big Fucking Rocket’). Since then, the project has changed its name, design and specifications several times; but the idea is essentially the same: build the most powerful launch vehicle ever developed; a monster capable of carrying over 100 metric tons into Earth orbit.

Why is Starship so important?

The project has attracted worldwide attention. Largely because it’s a key element in Musk’s plans for Mars, but Starship is much more than a huge rocket. The project to create a “rapidly and completely reusable orbital-class rocket that can be mass-produced” goes much further and, in the words of Casey Handmer, will enable “a logistically capable conveyor belt to low Earth orbit” . That is, it will allow the harsh technical restrictions that have accompanied the aerospace industry for the last 50 years to be destroyed.

If we think about it, every space mission is a “miniaturization marvel” simply because we don’t have the capacity to put things that are too big and/or heavy in orbit. With Starship fully operational, the situation would change profoundly. We would enter, de facto, a new Age of space exploration.

What is the project about? How tall will the Super Heavy be? What parts does it have? 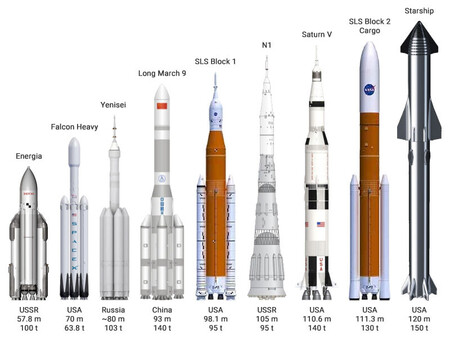 The Starship system will be superior in height to the rest of current and future missions, such as Yenisei (2028). Image: Thorenn

In very general terms, the success of Starship requires the construction of a two-stage rocket: the Starship itself and the launch vehicle, called the Starship Super Heavy. If we talk about the launch vehicle, it will have 33 Raptor engines and will allow Starship to leave Earth, returning to it to be reused. It is the SpaceX philosophy of reuse taken to the maximum power (of current technology).

The complete ship will measure 120 meters and will be capable of carrying 150 tons of maximum payload, with a total takeoff mass of 4,000 tons. And, with these features, it will outstrip NASA’s SLS (Space Launch System) launch system and SpaceX’s own Falcon Heavy. By landing the numbers, the Super Heavy will have five times more thrust than the most powerful rocket of the century at the time, the Falcon Heavy.

Why is it costing so much to develop Starship? 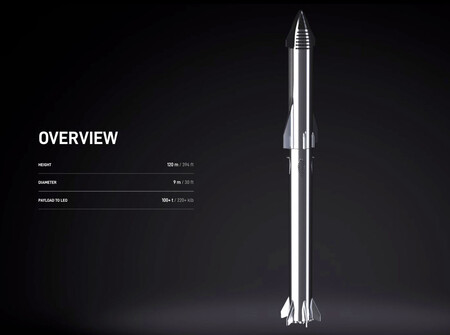 In many ways, Space X has us spoiled. Many of his developments seemed like science fiction a few years before they were successfully carried out. Instead, Starship is having a hard time getting off the ground, and while the pandemic has played a big part in these delays, the problems go deeper. Elon Musk himself recognized when the tests began that in the low-altitude flight he only expected a 33% chance of success and, after several delays, the ship managed to take flight and then completely explode at the end of 2020.

The problems with this project caused the FAA to monitor the project more closely, but the events have not stopped occurring. In March 2021 SpaceX successfully landed at third to explode minutes later. A few weeks later it would finally complete that cycle successfully and the situation seemed on track, until on July 11, 2022 it exploded again.

The 13 best shooters on Nintendo Switch

Andor: let’s see the official trailer of the Disney + series

Apple prides itself on protecting our privacy better than anyone else. And it’s going gold with that message