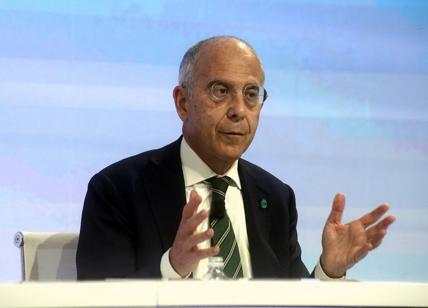 The Enel group closed the first half of 2022 with net growth in revenues (+ 85.3%) to 67.258 billion euros, compared to 36.29 billion in the same period of 2021, an increase – it is underlined in a note – “attributable to all sectors of business, mainly due to the greater quantities of electricity and gas sold at increasing average prices and for the greater quantities of electricity produced. “The result was also affected by the proceeds from the partial sale of the investment in Ufinet.

The semester saw an ordinary EBITDA at 8.298 billion (8.436 billion in 2021) with a decrease of 1.6% “essentially attributable to the lower margins recorded in the Final Markets for higher procurement costs and in Enel Green Power due to the lack of water supply which caused a significant reduction in production from hydroelectric sources “. The Ebitda stood at 8.205 billion (+ 5.3%) while the Ebit at 3.902 billion (-12.3%).

The net ordinary result of the Group falls by8.3% to 2.109 billion due to the trend in ordinary operations, only partially offset by the positive effects deriving from the net financial management and the lower incidence of taxes. The net result of the Group amounted to 1.693 billion euros (1.778 million euros in the first half of 2021, -4.8%). Net financial debt at € 62.238 billion (€ 51.952 billion at the end of 2021, + 19.8%) due to investments in the period (which rose to € 5.889 billion, + 22.4%), of the acquisition of ERG Hydro Srl and the negative exchange rate effect. The increase in investments is mainly attributable to the growth in investments in Enel Green Power, Infrastructures and Networks and Final Markets.

Starace serves the roof at the price of gas

“In 2023 the markets will remain difficult, unless there is an EU-wide agreement on the gas price cap, but this price cap it is not on the horizon at the moment, there is no agreement and this is a mistake. I believe electricity prices will remain tense and high. However, our system protects us and allows us to grow our margins reliably and sustainable“This was stated by the Enel CEO, Francesco Starace, on a conference call after the disclosure of the group’s half-yearly accounts.

In any case, also in view of a possible stop of supplies from Moscow – which do not touch Enel “because we we do not take gas from the Russians but from Algeria and Azerbaijan“- Italy, second the group CEO, “should be able to deal with a winter without Russian gas, with some corrective measures on the weather and temperatures of the heaters “, perhaps adding” an additional production of coal “.

Starace: “The exit from Russia is in the final stages”

“LEnel’s exit from Russia is in the final stages” points out Starace. The exit – please note – provides for the sale of 56.43% of Enel Russia for a consideration of approximately 137 million euros, which will have a positive impact of 630 million euros on the Group’s consolidated net financial debt. The transaction is expected to close by the third quarter of 2022.

“The first half of 2022 was characterized by an adverse geopolitical, energy and economic context which however did not ha had consequences on the execution of our Strategic Plan presented in November 2021“Glosses Starace. He then underlines: “During the period we increased investments in renewable sources and distribution networks; at the same time, the policies on the one hand, the commercial markets we have adopted have protected our customers from the volatility of the moment and on the other, strengthened our medium and long-term objectives “.

“The Group’s financial position remains solid and, also in view of the persistence of a complex general framework, thanks to the visibility we enjoy on the evolution of the business for the second half of the year, we confirm the guidance for 2022 and our dividend policy“Starace concludes.

EU policies are penalizing for society

“The first half of the year in Europe witnessed the worsening of difficulties in the procurement of raw materials, which are expected tothey can continue for the next few months, with a consequent further increase in the price of electricity and a significant inflationary push. These factors have prompted the authorities of some countries to continue adopting policies to contain electricity prices for end consumers, with measures that in some cases penalize companies operating in the generation and sale of electricity electricity“. Indicates Enel in the note in which it communicated the results for the first half.

Ukraine, Pope Francis: “Departure of ships, a sign of hope”

Atlas: The rojineros close ranks in the Burrow

Mental coach: the expert who makes you redesign your priorities when life changes