If there is an organization that needs computing power, it is NASA. The United States Agency dedicated to space exploration is putting together the pieces to build its next supercomputer and has found two good partners.

After years of continuously upgrading a supercomputer since 2008, NASA has announced its most powerful system to date to tackle the new era of space exploration, from the upcoming Artemis missions, to launch simulation and beyond.

The thing is, you’ve probably already heard of it. The Aitken system has been with the space agency since 2019. But with a new add-on, it can tackle NASA’s work on a scale previously impossible.

NASA builds its supercomputers a little differently than their counterparts of national laboratories and large universities.

Rather than launching a monolithic machine with a defined runtime, it goes the modular way, gradually adding more and more capacity, as we have seen over the last fourteen years with its Pléiades supercomputer, which has been running since 2008.

This is the case for Aitken, which is officially the space agency’s most powerful supercomputer after the addition of four HPE Apollo racks based on AMD’s Rome architecture. The addition of AMD nodes is notable in this case, as the system to date was based on Intel’s Cascade Lake. 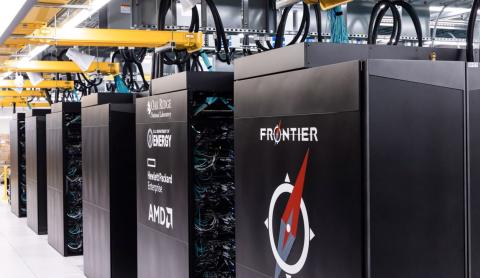 The most powerful computer in the world is from AMD: this is the Frontier supercomputer

As the densities are what they are, four racks is a lot of computing. The system now has 3,200 nodes which, even before the upgrade, ranked it 58th on the list of the 500 most powerful systems in the world.

Prior to expansion, the Aitken supercomputer was based on twelve (now sixteen) HPE Apollo 9000 racks and also features HPE E-Cells providing 1,152 Intel Cascade Lake nodes, with 40 cores per node.

NASA’s Pleiades has a much longer history than most science machines and a history of work that includes analyzing data from the Kepler mission.dark matter research, and a full-scale visualization of Earth’s ocean currents.

In 2008, when it was first operational, Pléiades was the third most powerful supercomputer on the planet. and was still in the top 50 of the top 500 list in 2019.

The long-running system went through multiple expansions, but began as an SGI-built supercomputer based on Intel Harpertown processors, before going through the entire Intel chip release timeline. until finishing with just over seven petaflops.

The fact that there are 16 more modules to fill in the NASA Ames Modular Data Center shows that we can expect NASA to keep expanding, just like the universe.

Saints Row Proven: a step back, aiming for a bright future | Ruetir.com

Chivas vs. León: Cadena came out with doubts because of the disallowed goal against Vega

Tekken 8 introduces itself to Sony’s new State of Play

Toby Fox confirms that he has composed the music for the teraraids in Pokémon Scarlet and Purple – Ruetir.com