You could invest up to 180,000 euros without paperwork

Many investors, some more or less experienced, but mostly less experienced people, decided to give them a try. It is estimated that there are 300,000 people scammed around the world, of which 28,000 live in Spain. Attracted by the high profitability, they ran like crazy to the project website that allowed them to invest up to 180,000 euros in a few steps and without the need to provide documentation. (not even the ID). 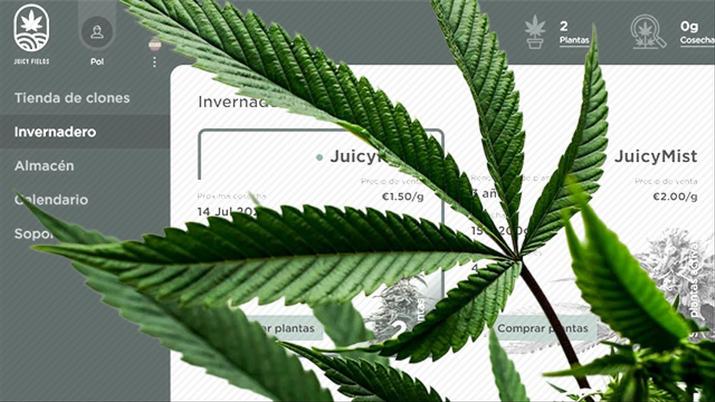 In addition, on the website itself they made an effort to encourage users to invest with statements such as that everything was completely legal or that the investment was 99% guaranteed. One of the first red flags was that they used a bank located in Cyprusone of the many tax havens in the world.

Already in May we were aware of the warnings from the CNMV and from some economists who were aware of the project. In fact, the regulator included the company in its list of warnings of entities that do not have the proper authorization. In these companies it is not recommended to invest and finally everything has collapsed like a house of cards.

Pyramid scam and similarities to a cult

Everything was organized through Telegram groups where investors ask their questions and lived the day to day of their investments. It is estimated that these groups, some with more than 20,000 peopleThey exchanged more than 1,000 messages every day. Everyone was welcome and action was only taken in case of insults and disrespect.

However, last Monday everything was blown up. Withdrawals from the platform were blocked citing internal problems. Both investments and withdrawals could be made with cryptocurrencies or SEPA transfer. Panic quickly spread among the members of the group who had made large investments and who now see their money totally lost. 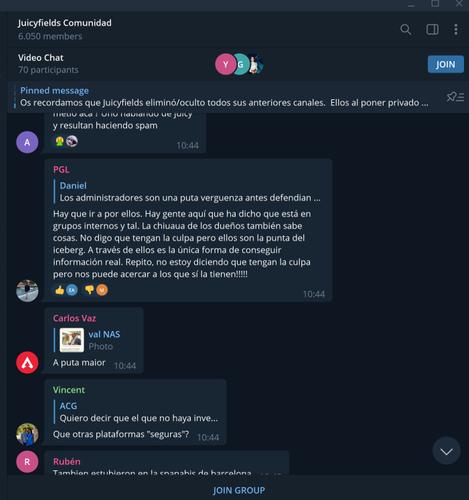 In the Telegram group https://t.me/juicyfieldsio they have organized themselves to talk about what happened and have even created another group of affected. The messages have not been long in coming:

“Who will give me back the 20k euros that I lost?”

“Mmmm, I’ve also palmed pasta, don’t you see that this is over already? From the beginning it was clear that this had an expiration date, and each one has played with the amount they wanted, when the returns are so high there are many risks, the story always ends ”

“Come on people, forget it now, they have nailed it to us, they have given us a shake that we will not forget in our lives”

“This is what they were achieving with the famous 48-hour ultimatum. Buy time while they robbed all the accounts. But of course if you commented on it in the groups they expelled you for saying fear. Anyone who insinuated any doubt about the project was expelled.”

The web has also stopped showing signs of life and many are beginning to accept the harsh reality as we see in the messages above. However, others still continue to defend the project and point to the version of technical failures in the platform. This behaviour “sect roll” We have already seen it in other scams such as IM mastery academy and cryptocurrencies. 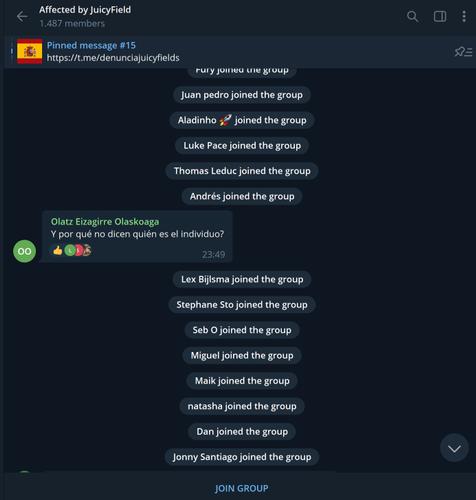 The company’s statement to the workers

As if all of the above were not enough, in the last few hours the company has carried out this communication to workers:

“To all of our members at Juicy Fields and e-Growers.

As of this moment, there is a lot of uncertainty in the communities regarding the activities within the structures of the Juicy Holdings BV company. I can understand this, because it only takes a small group of negative people to start spreading rumors and discord within the channels of the larger community. So let me give you the facts as they are right now.

I started working for Juicy Fields 42 days ago. I was hired specifically to create structure, transparency, and most importantly, a compliant company so that Juicy Fields could better serve current and future customers. The entire objective of Juicy Fields has always been to offer the public the opportunity to participate in the commercial cultivation of cannabis plants, and the profits generated as a result.

I have been involved in commercial farming and produce manufacturing for 9 years. We fully understand how profitable this industry can be. For Juicy Fields to offer a vehicle that allows people to share in this revenue, it is not only their right, but it is also a fantastic opportunity that individuals can take advantage of.

On more than one occasion I have informed you that I have made a number of essential recommendations to the owners of Juicy Fields regarding the necessary changes required. (You read that right: I do not own it. I have no control over the bank accounts, the e-growers database, the websites, or any of the social media platforms.) These changes include the development and launch of an improved platform through which e-growers, and anyone else, can access information and have full control over their own funds. Of the 5 owners of record, two were initially reluctant to accept these recommended changes, arguing that changing a working model was not necessary, but have since recognized that change is inevitable.

During this phase of change, both technical and corporate changes will be applied. Naturally, this will affect operating accounts, etc. The owners, as a precautionary measure, have decided to restrict access to certain accounts to prevent third-party breaches and hacking. Attempts to hack the secure locations where your money is kept is a constant threat that technical teams have to deal with on a daily basis. To start speculating that your money is insecure or that the owners of Juicy Fields are going to run away with their hard-earned money is simply irresponsible and untrue. Where are they going to hide if they try that, and why would they destroy a profitable company like Juicy Fields?

Please be patient for a little while longer and don’t listen to the bunch of negative people who are always trying to spread unfounded rumours. Change is 100% coming, and you will have the right to accept and embrace that change or take your business elsewhere if you feel uncomfortable. Give me and my little team time to complete the work we’ve set out to do. The changes we have recommended must be made, or Juicy Fields’ business will come under heavy regulatory scrutiny. My job is to make sure we help build a sustainable company that is legal and safe for you to invest your money. If these recommendations I have made are fully implemented, the new platform should be available in August. However, the final decision remains with the owners. If anything changes, I promise I’ll let you know. Any news heard from any source other than mine is all speculation.

Last but not least, I also promised you a video message. Well, it’s still in the making. The last few days have been quite hectic and have not allowed us to take care of those luxuries. However, I will continue to fulfill my commitment as soon as possible.

Willie and the Juicy Fields crew”

A statement that seems more like trying to buy time to get an exit than anything else. In fact, it doesn’t fit with shutting down all social networks and blocking withdrawals.

Bathing in ice water, is it good for health?

The wonderful Android scene makes it possible for Samsung Galaxy S3 and Note 2, with more than 10 years, to receive Android 13

This is what the Apple Watch Ultra battery really looks like, exploded view on video

How to get Gallade and Gardevoir in Pokémon GO - Ruetir.com

Samsung Galaxy Watch5 Pro 4G, the watch that has everything to be our inseparable companion on adventures