There is one day a year when 99% of the world’s population receives sunlight at the same time. Is today

A Reddit user warned some time ago that this July 8 is special due to an unusual event: at 11:15 UTC (13:15 Madrid time) it turns out that for more than 99% of the world’s population it will be “day “. It seems almost impossible but pay attention, because in essence the data is correct.

Happens on July 8 at 11:15 UTC. It is not that it only happens today: it happens every July 8, every year, at 11:15 UTC (equivalent to 1:15 p.m. CEST, that is, the time in mainland Spain, for example). as some suggested and Twitterthere should be some special name for this day (“Day Day” or “Sun Day”, answered users then) —and why not, declare it a global holiday—.

It’s “daytime” for 7.7 billion people. Those responsible for TimeAndDate have made some calculations and at that time they revealed that it will only be night for about 80 million people – most of them in Australia. 7.7 billion human beings—99% of us—will be between what we understand as dawn and dusk. 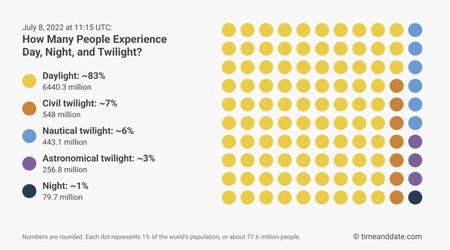 Astronomical twilight… Almost 257 million people, mind you, probably don’t think “it’s daytime” because they reside at “the outermost edge of the twilight zones, within the darkest twilight phase called astronomical twilight.” In that area the Sun is between 12 and 18º below the horizon, and at that angle “indirect sunlight becomes so fine that it is usually indiscernible to the naked eye.”

This type of light is only perceived, for example, when astronomers try to observe celestial bodies that emit very weak light: that is when they need total darkness and totally clear skies, and this type of twilight light can harm these observations.

…and nautical twilight. But then another 443 million people will also think it’s night because even in the next twilight zone, called “nautical twilight”, the sun is between 6 and 12º below the horizon and its light is not easily discernible either. For example, in urban areas, where most people are concentrated, light pollution can end up “covering” the faint glow of the Sun.

The actual percentage is closer to 93%. Taking all this into account, the percentage of the population that perceives this sunlight is somewhat lower. Even so, it is impressive and about 93% of the world’s population will “think” that it is daytime: some 7,205 million people in total.

What about the June solstice? The summer (or June) solstice is the longest day of the year in the Northern Hemisphere. This year it was on June 21 (also at 11:15 UTC, which is the “perfect” time in both cases) and you’d think that’s when most people would perceive it as daytime. According to TimeAndZone that is true if we leave out those astronomical and nautical twilight zones that do not perceive that it is daytime.

If we take that into account, the summer solstice wins, but just barely: 7,218.8 million people would perceive that it is daylight on the June solstice compared to the 7,204.9 million who will today, July 8, at 11:15 UTC. Be that as it may, today’s date is certainly unique, and it would certainly be interesting to give it some special name to reflect it.

Xiaomi Redmi Pad: a screen that shines with its own light and that comes well accompanied

Xiaomi TV Q2: a television with Dolby Vision IQ and Google TV to succeed in the high range with a groundbreaking price

Xiaomi 12T and Xiaomi 12T Pro: the 200 megapixels reach the latest high-end Xiaomi (which does not skimp on power either)

The Xiaomi Smart Band 7 Pro arrives in Spain: price and availability of the most ambitious Mi Band

Xiaomi Robot Vacuum X10+ and Truclean W10: leaving low prices behind to try to be the new reference in vacuum cleaners

Bungie Day 2022: here are all the planned initiatives | Ruetir.com

The success of the electric car is also a problem for the State. Norway has already figured it out