AOC GH300 Tech Review: A little must have at a super budget price | Ruetir.com

For several years now, AOC has become a pillar for the gaming world. The Taiwanese company, over time, has increasingly consolidated its prominent position within the videogame industry and technology in general, thanks to a wide choice of high quality and reliable products, which have made the brand is a point of reference, especially for what concerns the sector of “audiovisual” peripherals. AOC, we know, is famous all over the world mainly for the quality of its monitorsin particular the gaming ones, which from year to year have climbed more and more the hierarchy of the public satisfaction index, to become among the universally most appreciated and requested products in a market that, however, offers many alternatives. Those who know AOC well, however, know perfectly well that the company has taken this step with great dedication and above all in small steps. AOC has been able to work with its head down, starting “from the bottom” like and more than many other important brands, and then reaching today’s goals, and with the same commercial and working policy the company has been expanding its offer in an increasingly convincing way. It is no mystery that gaming peripherals under the AOC brand are experiencing a moment of great diffusion, thanks also to the excellent management of the quality-price ratio that distinguishes them, a decidedly interesting aspect and that often ends up too much on the margins of the working dynamics. of many companies. Precisely in this regard, after having spent the last week testing l’headset gaming GH300, a solution at an affordable price (about € 50) but with very good performance, we are ready to confirm what has been said above in our product review, which has been able to amaze us in several respects even though without the obvious limitations within nature low budget of the product itself.

AOC GH300: contents of the package

In this respect, AOC could do much more. In fact, the AOC GH300 gaming headphones come with a very nice box from an aesthetic point of view and very generous dimensions, but it all stops practically there. Once the package is opened, in fact, in addition to the very light plastic support in which the headphones are placed and some layers of plastic in which the most delicate points of the hardware itself are wrapped, there is practically nothing else. In addition to the object of interest, in fact, in the package there is only a small illustrative voucher for the installation, which completes an offer, in this sense, decidedly very conservative and which makes, in some ways, the idea of have in your hands a product that is perhaps even less qualitative than it actually is. 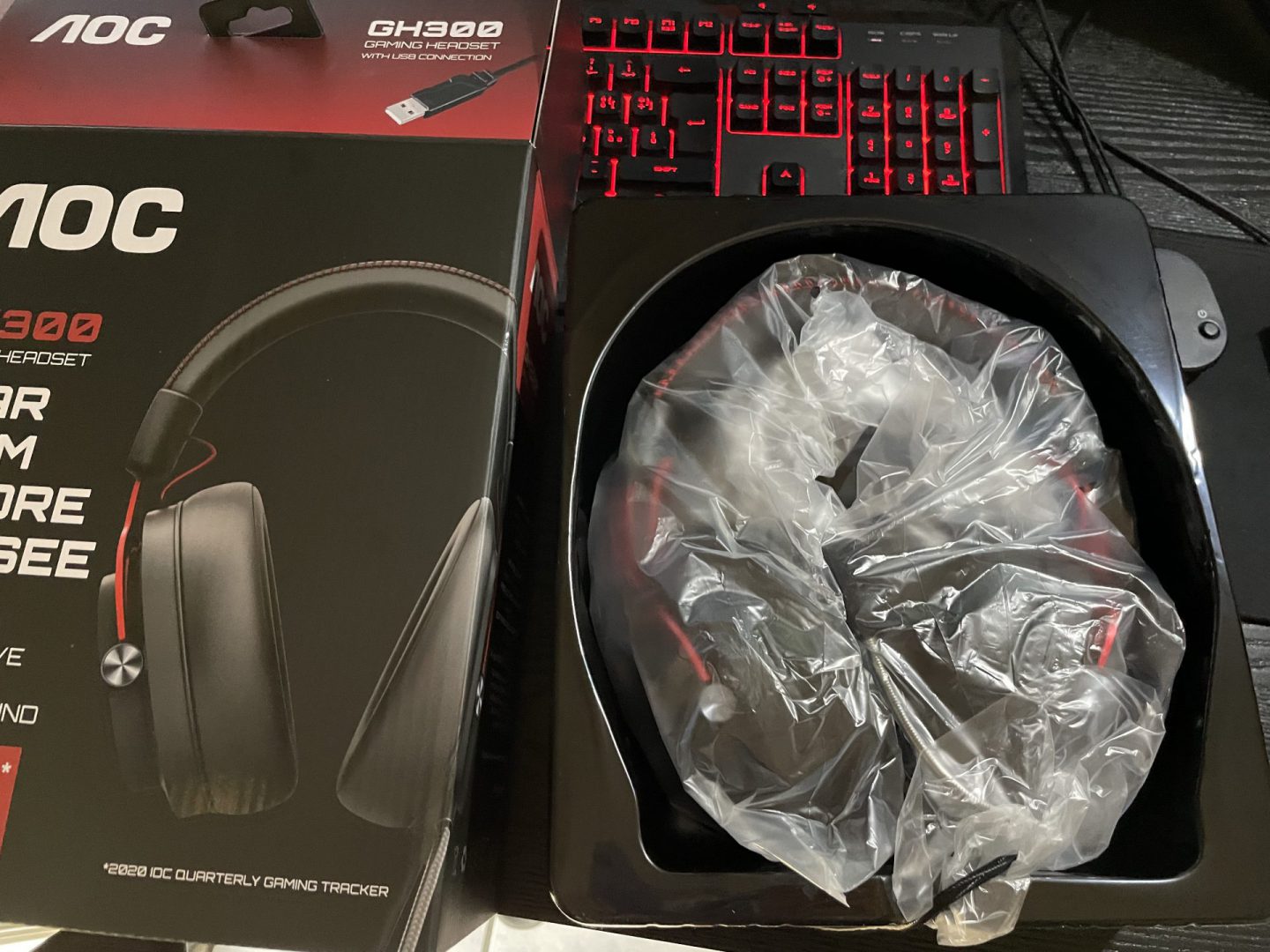 From a purely aesthetic point of view, the AOC GH300s are characterized by an attractive and “pompous” design but ultimately very classic. In line with what is now a huge choice of other products that offer a very similar livery, these gaming headphones from the Taiwanese company are pleasing to the eye and discreetly elegant, although they do not offer anything truly innovative in this respect. To be fair, however, from this point of view, we greatly appreciated the presence of the multicolored LED on the outside of the ear cups, very subtle and sober and which, in its attempt to make the headphones somehow “cool”, still manages to keep the original sober design intact. The LED writing, as well as clearly other factors such as the volume and the microphone, is controlled by a rectangular remote control present on the surface of the cable, the latter very long (2m in length) and with a good build quality. The remote control, on the other hand, appeared to us perhaps a bit bulky both from the point of view of size and of its design, on which different color solutions stand out, such as a dotted circle for volume control, which makes the latter even more eye-catching. than it already is. Even in terms of materials, the remote control appears very light and “plasticoso”, A detail that, however, we want to clarify immediately, stops right at the latter, since it does not involve the headphones themselves, which are characterized by a decidedly superior build quality. 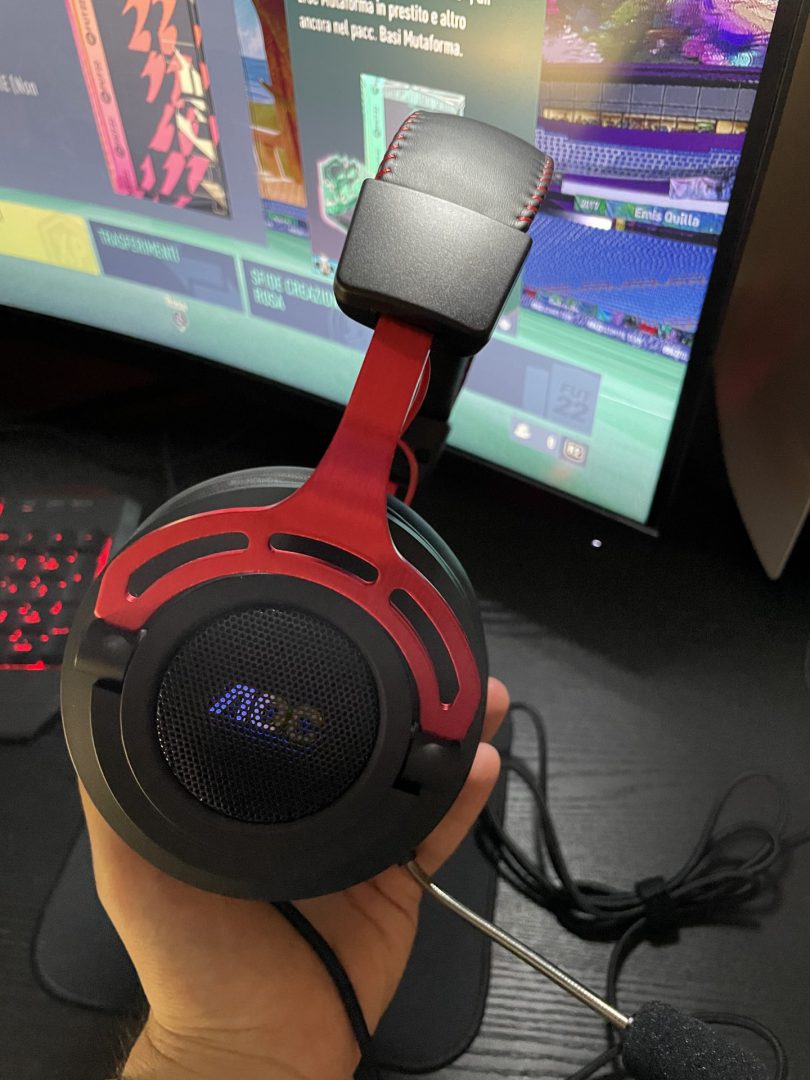 While still made of plastic for most of their surface, the AOC GH300 proved to be very solid and pleasant to the touch, thanks also to the choice of introducing the side inserts in metal, with a red color that also plays its part on an aesthetic level. The latter, as well as the upper part of the device, give the headphones greater solidity also from the point of view of ergonomics and quality of use, especially in long sessions. Despite wearing them for some time and with unlikely temperatures due to the summer period, the AOC GH300 still seemed to us fairly comfortable and never “suffocating””, Thanks to the mix of materials with which they were made, which gave the headphones a good compromise between solidity and weight. Obviously, our examination of the quality of life offered by these headphones could only end with the ear cups, which are also very comfortable, net of what one might think considering the market price of the product. Even after long sessions, in fact, the AOC GH300 performed very well in this regard, clearly within the limits of the possible, showing themselves to be light and never annoying both in contact with the ear and with the external surface of the face and in general wearing them. further proof of the excellent work done by AOC. Finally, it is a pity for the choice of giving the headphones USB support (2.0) as the only means of connection with the various peripherals and therefore for the absence of the classic 3.5mm jack. This choice, as far as we are concerned, is perhaps a little limiting and may require the use of an adapter if you want to connect headphones not only to the monitor but also to other devices.

However, coming to the most “chubby” part of the review, that relating to the behavior both from an audio and microphone point of view, it is necessary to make an initial premise. Although they are also valid for uses other than those of gaming, for example in watching a movie or listening to music, the AOC GH300 are mainly and almost exclusively designed for gaming and, consequently, give their best when they are used for their main purpose. Characterized by a frequency response time from 20Hz to 20Khz, by a good 50mm driver and by a less “aggressive” bass management, the AOC headphones perform very well especially in games with very loud and characteristic noises, which they range from FPS to racing games, two of our main objects of study in the testing phase. During our test we in fact used particular products such as Overwatch, characterized not only by the “classic” sounds of various shots and firearms, but also by many voices (the numerous dialogues) and in general many different environmental noises that seemed to us to be replicated. in our ears in a very valid way. The AOC GH300s perform very well, and we could also notice this in the presence of titles such as F1 22 or Forza Horizon 5, characterized by the loud noises of car engines, with their consequent fast passage on the asphalt. Even with the aforementioned products, the headphones have always behaved great, managing to return a clear and well-balanced sound in most cases thanks to the good management of the surround, able to manage and divide the different tracks in a very valid way. audio present in the various sections of the game. Different speech regarding, as mentioned at the beginning of the paragraph, the yield of the device in other conditions of use. While playing multimedia products such as anime (we used Bastard !, recently available on Netflix, as a sample) the headphones behaved discreetly, but they never gave us that feeling of being using a particular or otherwise dedicated product. This aspect, on the whole however never annoying and all in all understandable considering the entry level nature of a product which is also designed mainly for other uses, has revealed itself in a way if we want slightly more lively in the execution of the music. Several songs, of different genres and authors, appeared to us distinguished by a sound output that was not very focused, with no sharp details either in terms of power or in terms of general cleanliness. Furthermore, it should be noted that the headphones offer good passive isolation, although in the presence of loud noises they tend to lose some of their efficiency, with more or less important consequences on the general quality of the product. Nothing sensational, of course, also because in the gaming field the GH300s do a really good job, but it is still a small detail that we would like to share with you. 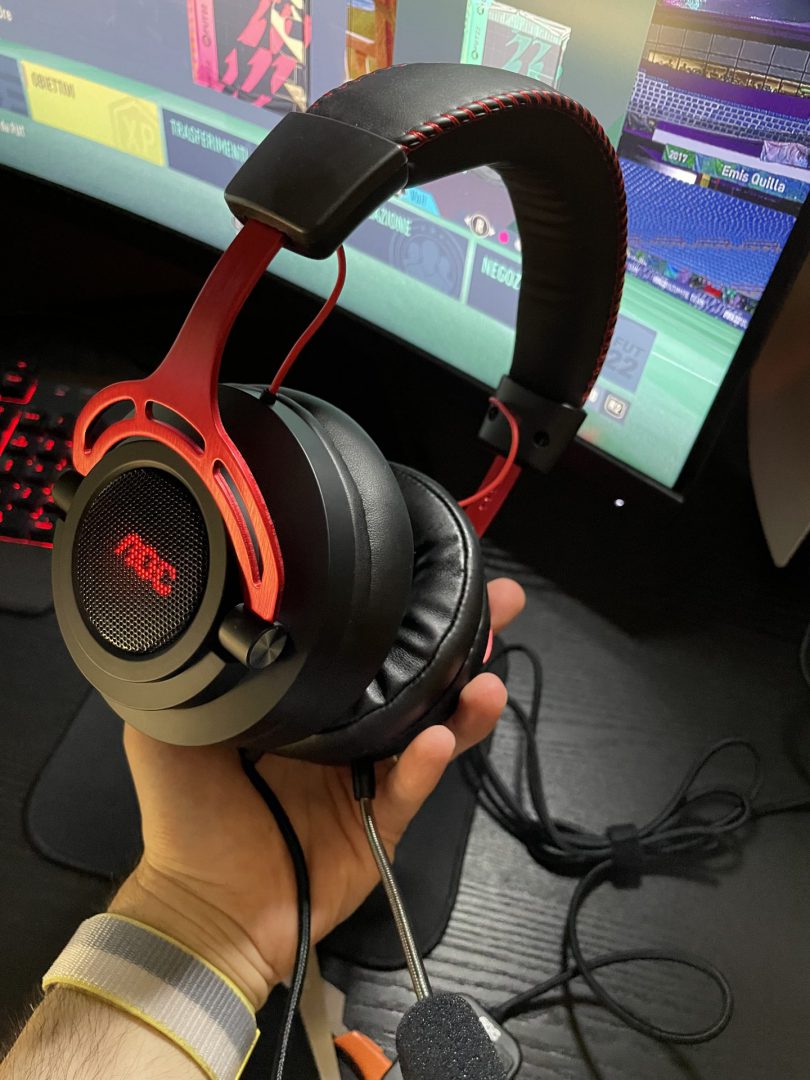 Speech apart as regards, however, the other protagonist of the review: the microphone. During our week of testing we used the microphone supplied, also equipped with a pop filter rimovibile well-made, and has always shown us that he knows his stuff, behaving very well both in the registration phase, both in the chatting phase and during the live shows, therefore with the “mediation” of third-party software such as OBS, Streamlabs, RE Central and so on. Thanks also to its omnidirectional nature, the microphone mounted on the AOC GH300 has shown an excellent level of quality as regards the voice in cleaning, especially if it manages to set everything well through the software. G-Menuto be downloaded separately and to be placed side by side AOC Audio Center to be able to access these functions. Thanks to this software it is possible to better adjust the quality of the incoming and outgoing sound, the power of the microphone and many other details, in a minimal and all in all easily understandable environment even for the less accustomed to the reference field. The software in question allows you to truly customize many aspects of the headphones, which impact a lot on the use of the product, which proves to be really interesting also in terms of ductility and malleability. Overall, therefore, we can only be satisfied with the hardware we tested, capable of being complete, of good quality and fairly versatile even net of its nature as an entry level product. 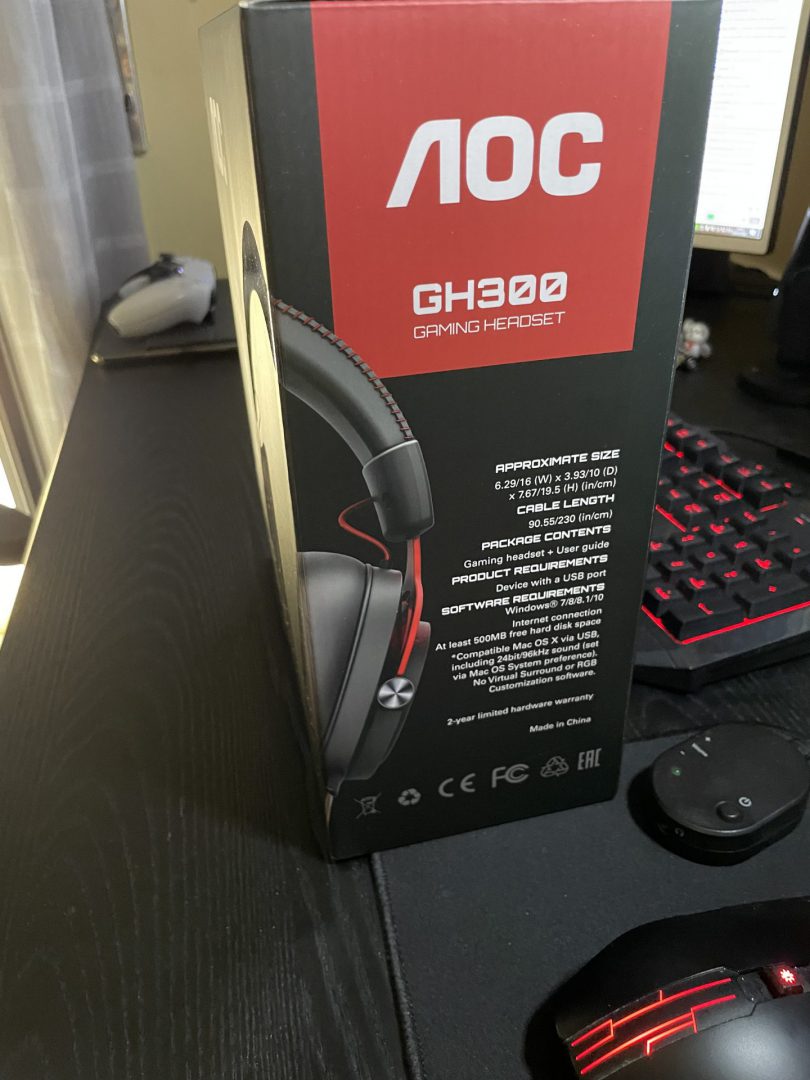 Without too many words, we want to immediately get rid of the proverbial elephant in the room: for the current market price (€ 24 discount on Amazon), the AOC GH300s are to be considered as a Best Buy. The headphones created by AOC offer a great value for money and do not seem to have anything to envy even the most expensive products, especially if you take into account their performance in the gaming field. From this point of view, the little girls of the Taiwanese company really behave in a commendable way and do not seem to have major defects, apart from that relating to passive isolation, which is not always total. On the multimedia side, however, the GH300s show some more limits, but overall, considering the list price, it is impossible not to recommend their purchase, as long as you clearly turn a blind eye to the limits listed above (and on the plastic in which they are wrapped. headphones, of course).

A fan has explained Wiglett’s theory of evolution in Pokémon Scarlet and Purple – Ruetir.com

Turkey has just discovered the second largest reserve of rare earths in the world. And that changes everything

The fines that will put you the most in summer

Steelrising Review: a French Revolution of a mechanical nature | Ruetir.com