Xiaomi 12 Lite: 108 megapixels and a good dose of power to fight in the most ambitious mid-range

The Xiaomi 12 Lite has not been officially presented, but Orange Spain has uploaded it to its website, unraveling spec by spec. As expected, this is a mid-range, although the price is the highest ever seen in this Lite family.

We tell you the specifications and technical characteristics of the Xiaomi 12 Lite, according to the information leaked on the Orange website. Drink a lot of the previous modelalthough the 108-megapixel camera is one of the big jumps for this 2022.

A hardware that sounds familiar to us

It is not the only identical spec. The Xiaomi 12 Lite repeats with a 6.55-inch screen with Full HD + resolution and AMOLED technology. In memories there is a jump and it is that, at least in the version that Orange will sell, configuration is 8 + 128 GBno trace of the base 6GB version.

The battery discreetly rises from 4,250mAh to 4,300mAh, with a significant jump in fast charging, which amounts to 67W. Stereo speaker, side fingerprint reader is repeated and even the design is quite similar to what was seen last year.

The big jump is in the main sensor, which goes from 64 megapixels to 108. More megapixels do not mean better photography, but it is always good to have a better sensor. The wide angle repeats resolution with 8 megapixels and the macro lowers its quality even morefrom 5 to 2 megapixels.

Versions and price of the Xiaomi 12 Lite 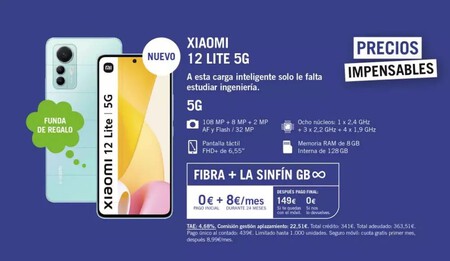 The Xiaomi 12 Lite is sold in Orange Spain at a price of 506 euros. In the case of Yoigo, it can already be booked at a price of 469 euros. It will remain to be seen what is the official price by Xiaomi, although it is clear that it will be around 500 euros. More than 100 euros difference compared to the previous model.

The ZBE will arrive in Spain in 2023. They do not necessarily mean the end of cars with a B label

HBO Max premieres in October 2022: all the new series, movies and documentaries

God of War Ragnarok: fans delirious on social networks after the announcement of the release date | Ruetir.com

Istat, deficit / GDP falls to 9% in the first quarter. The tax burden is rising

This has been the detail of Bandai Namco with Let Me Solo Her, the legend of Elden Ring who continues to help defeat Malenia

Resident Evil Village, the DLC will almost be a separate game

Dragon Ball: The Breakers, the trailer for Freeza reveals the release date

These 3 Pluto TV channels will improve your day