The cyberpunk theme has always been in fashion, and many games take advantage of that public interest. That’s how the boys One More Level in 2020 they brought us the game in the first person, Ghostrunner, a fast-paced title with hints of parkour. Now, the update for more powerful consoles has been released and we will tell you how the game is going.

As we had an analysis of the game at the time, for this review we will tell you what is new in the game compared to the vanilla version of 2020. This update includes several graphic modes, faster loading times and haptic feedback in the case of PC platforms. and PS5. 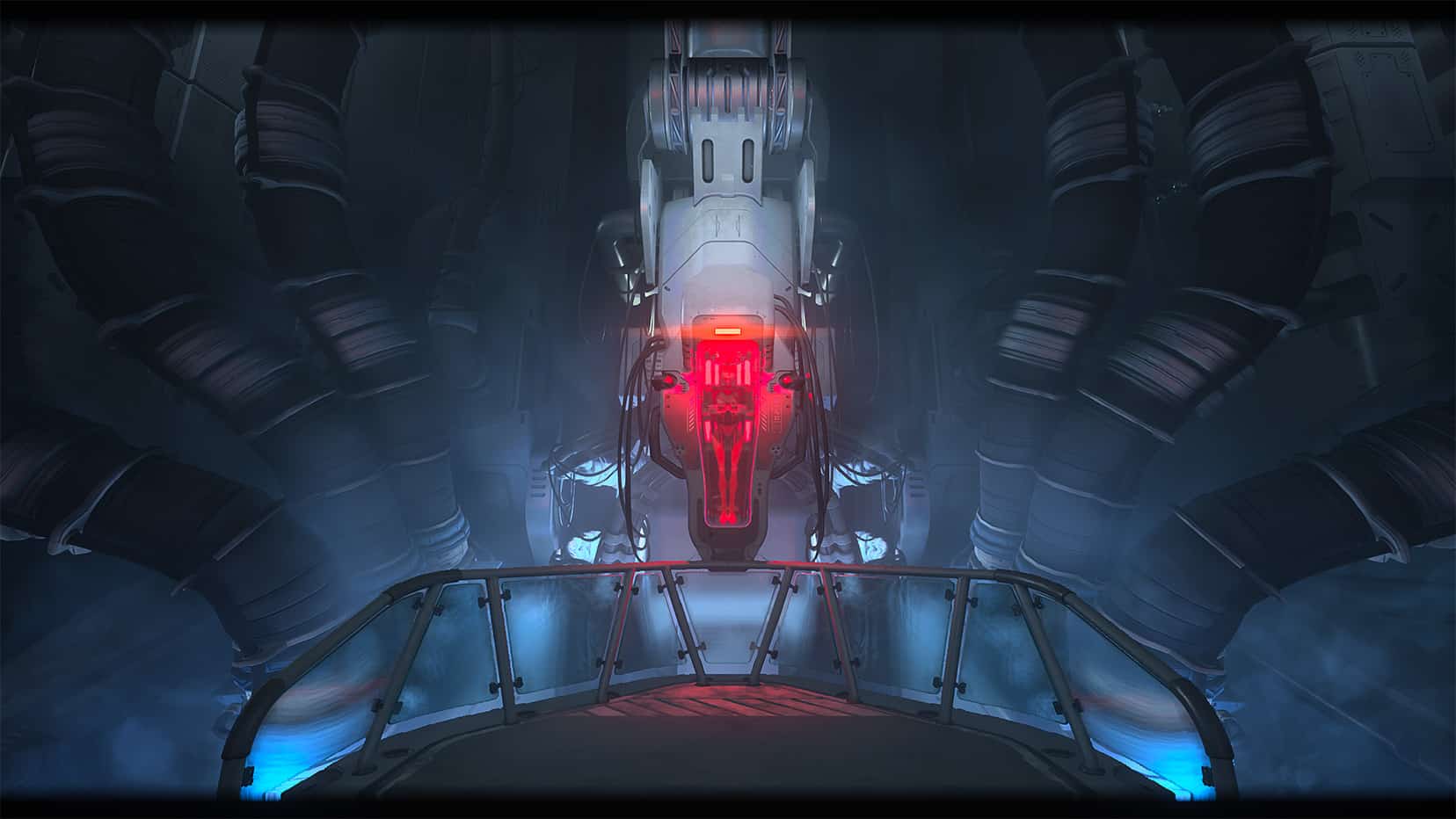 According to an intro video before the main menu, we’re slashing enemies left and right where we pass by what looks like a tall building, the Dharma Tower. We are what looks like a cybernetic shinobi who is defeated upon reaching the top of the tower and then awakens at the base of this same structure. We woke up with a katana in hand with no memory of how we got to this point.

There is a mysterious voice that guides us through the intricate paths to the tower and calls himself The Architect. This one informs us of a great event that caused a catastrophe, and that the person in charge is the former companion Mara now known as The Keymaster. Mara is the one who has been in charge of finishing off most of the Ghostrunner units responsible for keeping the peace in the Dharma Tower.

We are the only Ghostrunner left, and our goal is to defeat The Keymaster once and for all. Usually, most of the information is given to us through radio conversations with the Architect. He is offering us instructions and backstory, and this is how we learn about the lore of this decadent world. 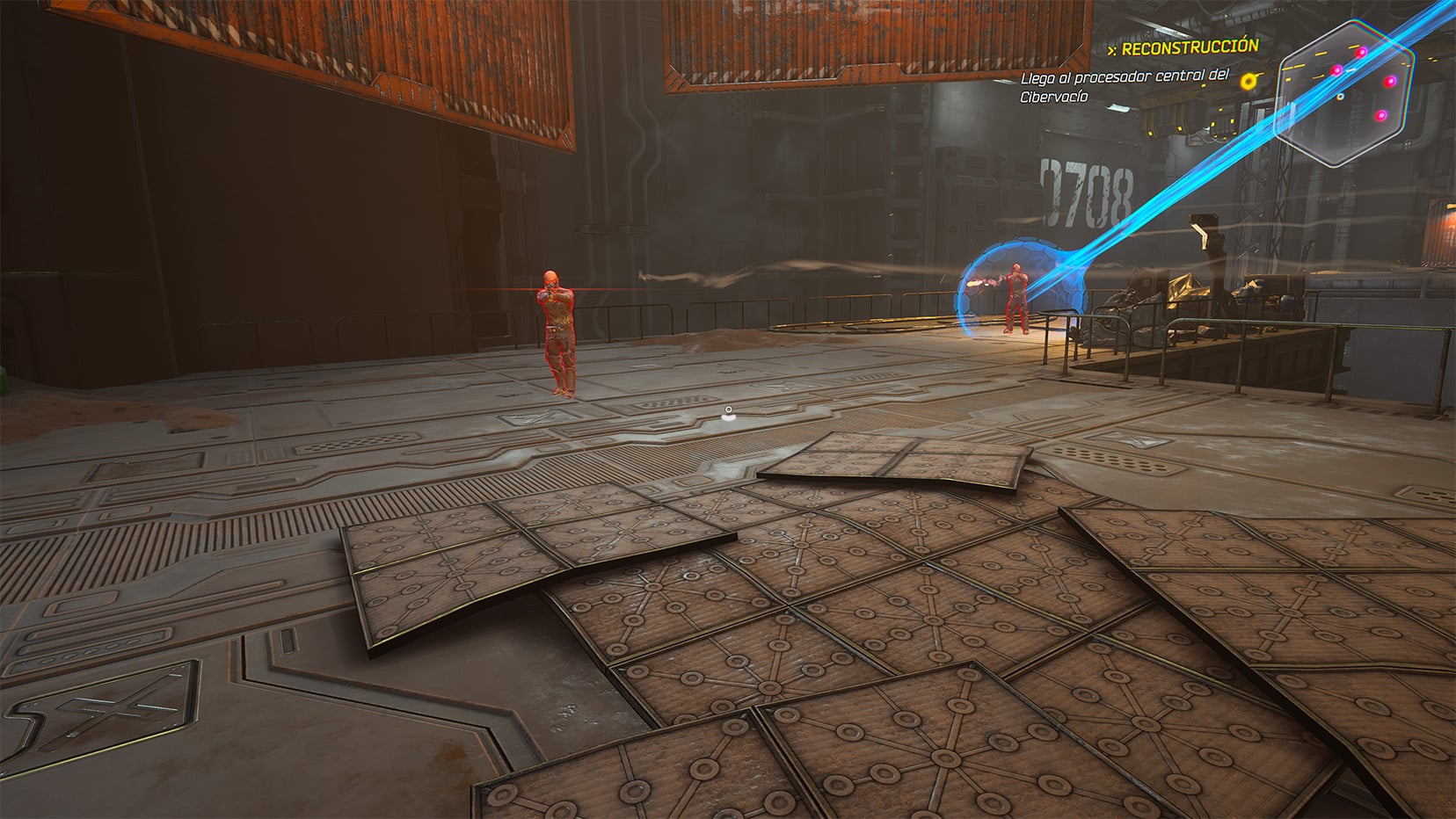 This is an unusual first person game. We will not have an arsenal of weapons, except for our trusty katana. Ghostrunner is based on having fast reflexes since we have to run, jump over obstacles and run through the walls, but not before destroying any enemy that crosses our path.

We must be in constant movement, gaining momentum and never stop until we reach the end of each level. However, although it can be fun, the game becomes frustrating, first because we die from a single shot and second, because the enemies are sometimes so well hidden that it will be difficult for us to locate them. So, the problem is that dying so many times, despite the generous checkpoints, is very annoying and cuts the rhythm that the game wants to show off.

The game depends a lot on trial and error, and we must memorize each level by finger if we want a good score. We start a level by running, jumping and using our grappling hook to get to far away places, it reminds us a lot of Mirror’s Edge, except here we cut enemies in two.

Various skills can be equipped through an upgrade screen as we progress through the story, but these skills take the easy way out. Additionally, abilities are limited and require a cooldown that decreases with enemy kills. 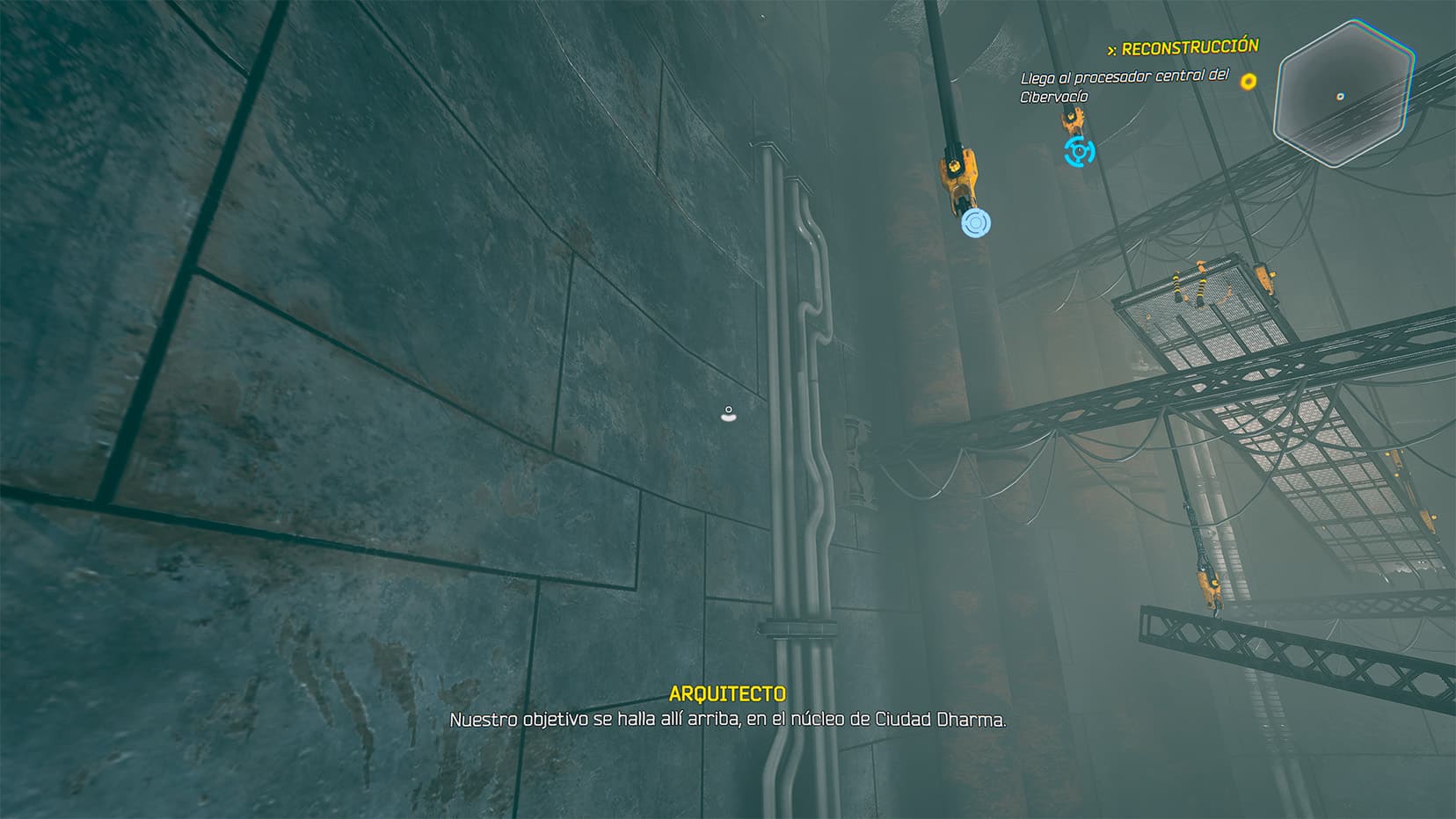 Like any definitive edition Ghostrunner Complete Edition brings several additional modes such as Waves Mode. In this mode we drive through a narrow battle area and we will have to eliminate all the enemies in our way, and each following wave increases the difficulty. Every time we beat a wave, we are granted one of three upgrades that grant special active and passive abilities and these stack over time, allowing you to become more powerful.

There’s also the ubiquitous photo mode that we all know it to be and a Time Attack-style Kill Run mode. Essentially, the bundle has gotten even more attractive since its release, and it’s just the added cherry on top along with the free next-gen upgrades.

Another of the DLCs is HEL, which takes place before the events of the game and serves to complement the story of the main game. 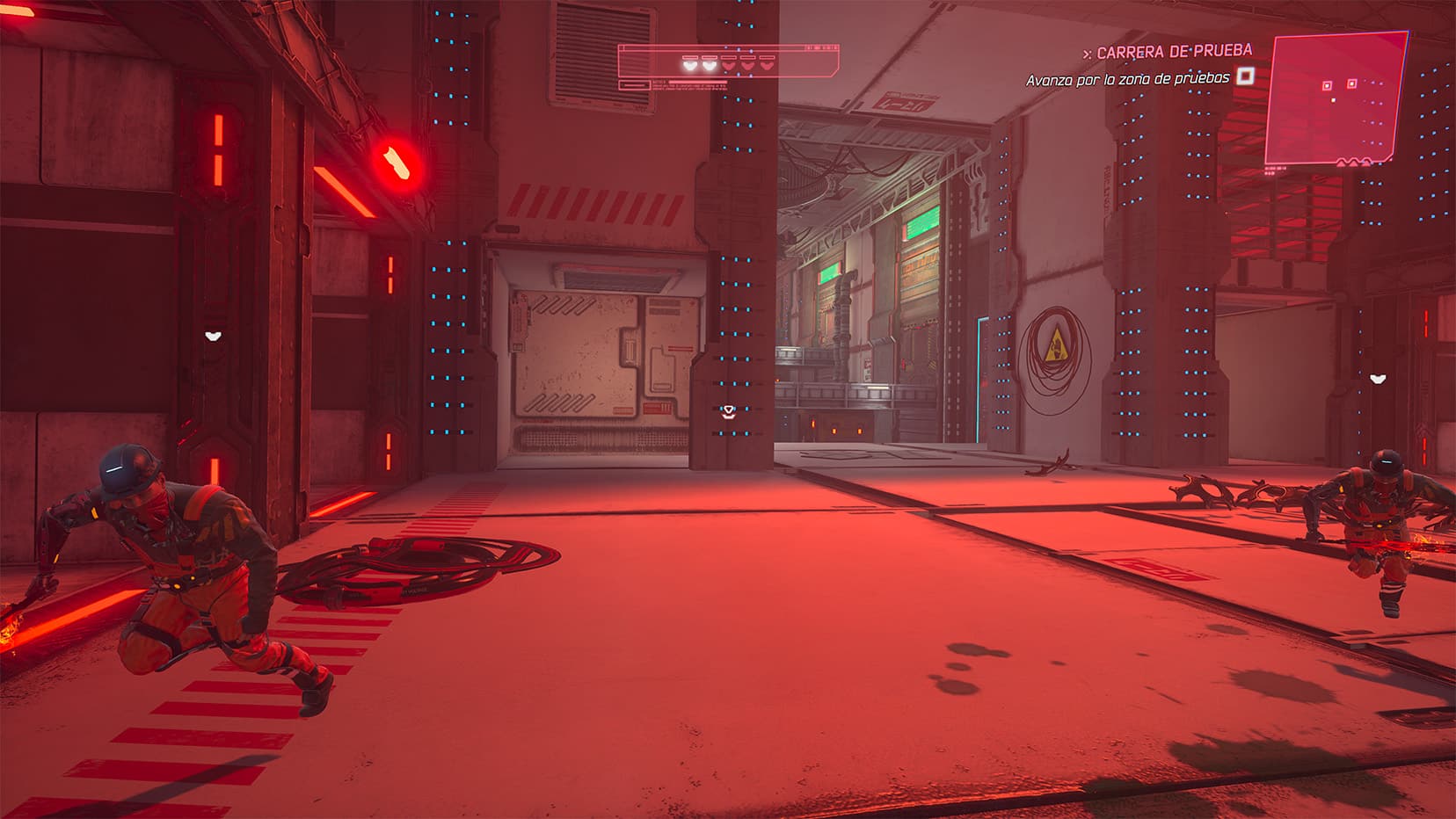 At the graphics level on Xbox Series, we have the option to switch between two modes, the same ones that have been implemented in recent games. Ray tracing is not available but we have the benefit of much smoother combat in a game where every split second counts. Resolution in this mode is pretty impressive, considering it’s usually compromised at 1080p in other games when prioritizing performance.

Without the aforementioned performance mode active, the title now runs at 4K / 60fps with the addition of Ray Tracing. Here the lighting effects have a noticeable improvement in this futuristic city that looks more realistic than ever. Surface textures are very close to reality, and neon is more vibrant and colorful. The pools of water that shimmer on the ground also appear more reflective and the shadows have seen a noticeable improvement. It’s not that the game was made from scratch, but the improvements are really remarkable.

Ghostrunner Complete Edition is the definitive edition of the cyberpunk-style title for Next-Gen consoles. We will find a fast-paced game, with updated graphics and graphic modes for these consoles. However, its one-hit kill concept and constant kills can hold back less hardcore players, though it does bring several modes to lengthen the life of the game.

Note: This review was done on the Xbox Series X version and the code was provided thanks to 505 Games. 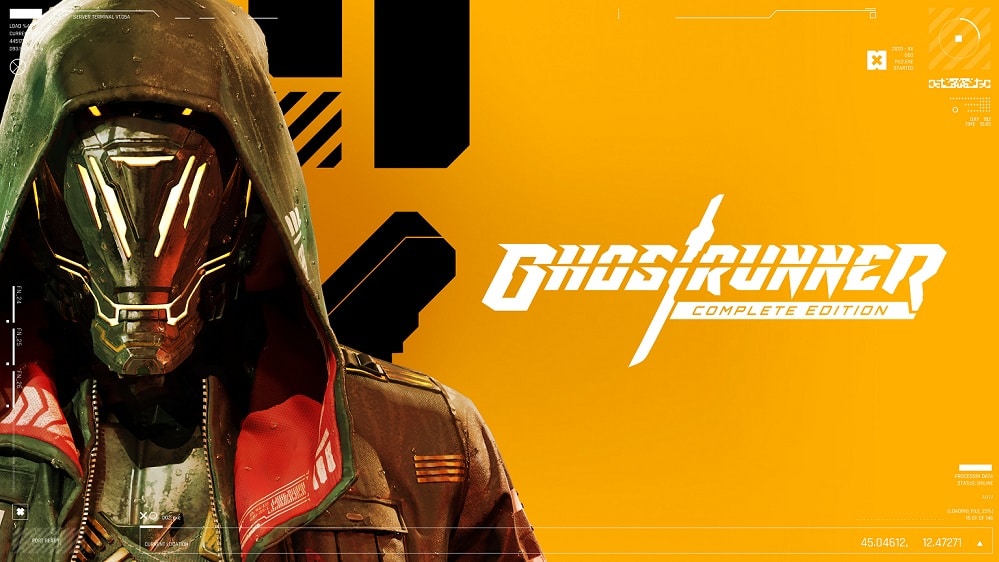 Dishwashers: how to say goodbye to bad smells

This country draws our colors: it will turn off and ban 2G and 3G before 2025