Forecasts point to another extreme heat wave in Spain. “Most likely” they will be right

Honestly, summer is looking worse and worse. It is true that these are only predictions and that there are still days before it materializes, but predictive models draw an increasingly extreme scenario for the coming weeks of July. As González Alemán from AEMET says, “if the forecasts come true (which they most likely will), we could have a record number over the Iberian Peninsula”. And that is synonymous with a new ‘heat wave’; one that promises to make us suffer.

What the weather models say. PolarWX is a project of Tomer Burg, a doctoral student at the University of Oklahoma specializing in studying arctic atmospheric dynamics. With this tool we can view maps in real time from various weather forecasting models. In general, it is the easiest way to approach this type of predictive models and, with a little training, it allows us to understand what are the meteorological stresses to which we are exposed every day.

A good example is this temperature map. Possible temperatures are projected in it and, as we can see, what it draws are heat records in the eastern part of the country. And when we talk about records, we are talking about temperatures that are above the 99th percentile in the history between 1979 and 2021. That is, extremely rare: extremely rare. 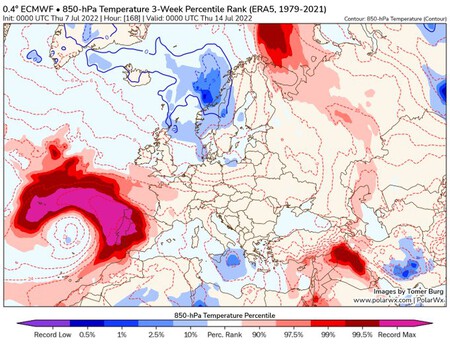 Another heat wave? The explanation can already be seen on that map. To the left of the peninsula, at the height of Madeira, you can see a point (blue) of cold. To the right, between Italy and Greece, you can see another. These two points are the epicenters of two storms whose dorsal (the point where they touch) coincides with the Iberian Peninsula.

That ridge is nothing more than a mass of hot air trapped between two big storms: the button that is going to activate the Iberian oven: that ridge is going to drive away the atmospheric instability of the peninsula and the sun, the lack of wind and the warm air boxed, temperatures will shoot up. In the following map you can clearly see that pocket of trapped air. 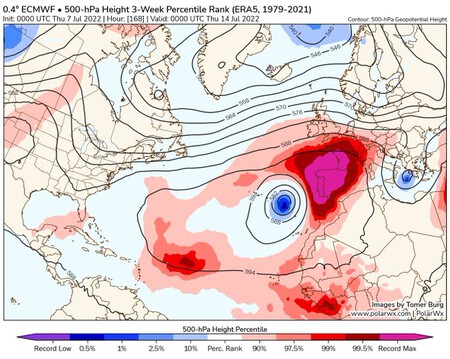 What can we expect? Although we must remember that, at the moment, these are only predictions, the truth is that the trend does not seem positive. As the days go by, the temperatures shown by the models are more and more extreme and that means that, even if they are not met, the final result will be (in any case) very hot. What can we expect? Very hot heat.

A trailer of what’s to come. A few days ago, we commented that the Azores anticyclone had been growing non-stop for decades and that this is what was motivating the stable, hot and dry climate of the peninsula to be more and more stable, hot and dry: that it was getting hotter and hotter . What we are going to see in the next few days, if the predictions end up being confirmed, is precisely how a storm pushes very warm air masses (typical of that anticyclone) over our heads. In other words, we are going to see a preview of what awaits us in the coming years.

Doomed to be poorer: supermarkets raise their prices by 15% while wages stagnate

The best free alternatives to Teamviewer to control a PC remotely

Halloween comes to Netflix in October with these 10 essential premieres

Netflix’s failure with ‘Resident Evil’ takes away one of its most exciting projects: ‘Grendel’

A battery-free, wireless and underwater camera: MIT technology to have energy at the bottom of the sea

In the next chapter of 'Tierra Amarga': Gaffur gives Ümit's bracelet to Demir, in front of Sevda and Züleyha, what will happen?

Inscryption confirms its arrival on PlayStation with exclusive features on PS5

The love story behind the Pap smear, the test that has saved millions of women’s lives