The latest buzz among drug traffickers is underwater drones. And Spain is manufacturing them

Castellar de la Frontera is a small town in Campo de Gibraltar, in Cádiz, with just over 3,000 inhabitants and famous for a large fortress dating back to the 13th century. After fourteen months of investigations, the police have revealed, however, another activity in the town, much less known, legal and widespread: it housed a true logistics and technological center of European crime.

The data he just ripped them off the National Police and demonstrate to what extent the talent from Cadiz has come to shine in recent years among the mainland drug traffickers.

The organization, now dismantled, was basically dedicated to manufacturing and adapting artifacts in an artisanal way in which to move drugs while avoiding the control of the agents. And the craft thing is a label that describes the way of working more than the result, worthy of a technological center.

Among the devices seized by the National Police there are three small underwater drones prepared to move a load of between 150 and 200 kilos of drugs with a autonomy of 50 kilometersmore than enough to comfortably cross the Strait of Gibraltar.

Technology at the service of crime 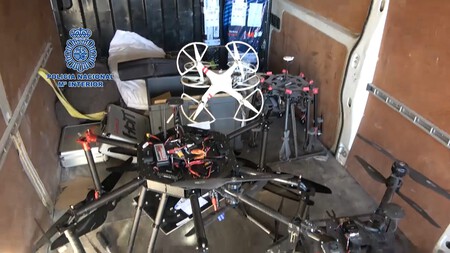 To make handling safer, the ships could also be operated without a crew. They only required the use of a tablet and app that allow them to be monitored remotely, guided by GPS.

“A person in his home could control the location and the place of docking,” explained Juan Antonio Sillero, head of the Union of Drugs and Organized Crime (Udyco) of Algeciras during an act in which the agency stood out for the operation and showed the peculiar semi-submersibles.

Of the three underwater drones that the Cadiz organization was manufacturing, two were still in process; the third, bound for France, only had final adjustments left.

RTVE specifies that to give shape to the band, in which there was a father and son, one of them with knowledge of handling helicopters, they combined traditional art with the most sophisticated technology. In the structure they used, for example, a keel and frame structure and reinforcements with plywood and fiberglass panels. Each drone was equipped with two powerful motors.

📍There are 8 people detained in #Cadiz, #Málaga y #Barcelona

👉 1st time vehicles operating under water without crew on board are intervened pic.twitter.com/P81cRwjIVx

Semi-submersibles are the highlight of the gang’s arsenal, not the only thing. The agents seized 14 kilos of hashish, eight kilos of marijuana, more than 157,300 euros in cash and six aerial drones Large size. In addition to the mini-submarines, the organization would also supply powerful drones equipped with 12 engines with which they achieved a range of 30 km.

“For the first time we have found an organization that carried out all the manufacturing phases of these unmanned vehicles”, highlights the Udyco command: “Not all people are trained to do something so sophisticated […]. It is a step further in drug trafficking”

It wasn’t all high-tech, either. The police believe that the gang was also in charge of caleteo, the manufacture of false funds in cars, vans, trailers or even surfboards, hidden spaces in which to elude the control of the authorities and hide the drug.

The police have evidence that they have tricked 13 vehicles, opening holes in which they could hide up to 800 kilos of load. One of those creations was uncovered en route to Denmark, where he was traveling with 218 hashish tablets inside.

Proof that things were not going badly for them is that —El País details— “multitudes of visits” from mafias from Italy, Denmark or France paraded through the Castellar warehouses.

“They had a special reputation,” says Sillero.

Agents began tracking them over a year ago, in april 2021, and his investigations have resulted in eight detainees: five in Cádiz, where the father and son reside, one in Ceuta and two in Malaga. The submarine they were working on already had a recipient: some French drug traffickers who, the Government delegate assures, wanted to use it to transport cocaine.

How to cut a rope in seconds without tools

The map that shows which country is exported more from Spain, province by province

Dahmer, the series that tells the life of the Milwaukee Cannibal, is already among the most viewed in the entire history of Netflix

This is U-Boat: the luxury underwater superyacht that costs 25 million dollars

A Ukrainian among the four laureates of the "Nobel of Mathematics"