Yet another accident on the highway with a catastrophic toll. The collision between two trucks cost the life of one of the two drivers who died charred.

The tragedy occurred on the A21 towards Piacenza, between Voghera and Casteggio. The accident involved three heavy vehicles. A truck driver was found charred under the rubble of his vehicle while the driver of another of the trucks involved is missing but, the chances of finding him still alive are practically nil as the remains of the trucks under which he is buried have burned down. 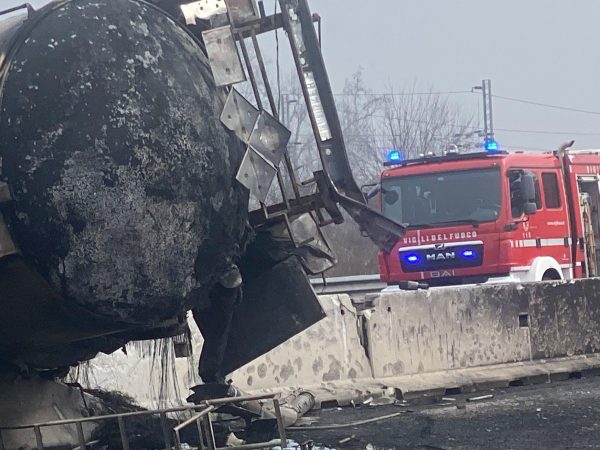 Hell began shortly after 5pm on Wednesday 5th July at kilometer 110 of the Turin-Piacenza-Brescia, in the Lungavilla area. The dynamics what happened is still being ascertained but it was immediately clear that it was an event of extreme gravity: the column of black smoke that rose from the point of the fire was visible several kilometers away, even from Pavia. Numerous rescue vehicles were sent to the site in red code from the Areu operations center. Unfortunately, the 118 health workers returned with only one of the three drivers: a 60 year old truck driver not in serious condition which was brought in green code to the Policlinico San Matteo in Pavia. The Fire Brigade found and extracted the body of one of the charred dead truck drivers from under a truck

In the early hours of the rescue it had been the carriageway towards Turin is also closed, to allow the rescue vehicles to arrive on the spot and the cars and trucks in columns were left, escorted in the wrong direction by the police and directed to the exit at the Voghera toll booth. Then the section towards Turin was reopened in the evening, but on the one towards Piacenza, the operations of the firefighters continued indefinitely. Motorway accidents involving heavy vehicles are frequent these days. A few days ago on the A14 Bologna-Taranto a truck carrying glucose overturned and even in that situation, unfortunately, the driver of the vehicle – a 37-year-old man – was remained imprisoned. The truck driver was saved thanks to the timely intervention of a taxi driver who saw and immediately raised the alarm.

Previous articleSonia, wanted to climb the Marmolada but gave up. I saw something that changed my mind, he says

Work: leaps and bounds for these signs

Alessandra Celentano without limits: she says everything she thinks

Chiara Ferragni falls back on it again!

Ricky Martin: the time he revealed that he practiced the golden shower, the fetish of urinating on your partner

If you navigate slowly with O2 it could be your fault: find out in 9 steps

Petroperú: board of directors approved the audited financial statements for 2021

Terraria will receive the “Labor of Love” update tomorrow – Ruetir.com

You can now play in the mythical church of NieR Automata