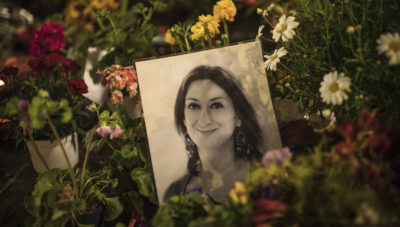 George Degiorgio, one of the men accused of killing the Maltese journalist Daphne Caruana Galizia, confessed to having played a role in the activation of the bomb that detonated his car in October 2017. George Degiorgio was accused of having executed the commissioned murder of an alleged principal along with his brother Alfred and another collaborator, Vince Muscat. Muscat admitted he was guilty in 2020 and collaborated with investigators to obtain a reduced sentence: 15 years in prison. Degiorgio’s confession is part of his lawyers’ attempt to seek a settlement similar to the one in Muscat.

Interviewed by Reuters, Degiorgio said he only did it for work, that he would have asked the perpetrators of the murder a much higher fee if he had known that the victim was so famous and that he thought she was a criminal.

Daphne Caruana Galizia was 53 years old and one of the best-known journalists in Malta, due to her investigations on corruption and especially on international tax evasion on the island linked to the Panama Papers, the confidential documents that had revealed an international network of companies off shore and their beneficiaries. She was the first to reveal the involvement of some prominent members of the government of the then Prime Minister Joseph Muscat.

Paradise of the ladies advances: the tv arrives in the department store

Taxi strike, waste and wild boars, Rome in chaos: the Democratic Party disappoints and the Rays ...

The latest buzz among drug traffickers is underwater drones. And Spain is manufacturing them

Guide to know in what order to see Neon Genesis Evangelion – Ruetir.com

Windows 11 has a new feature to prevent phishing attacks: this is how you can activate it