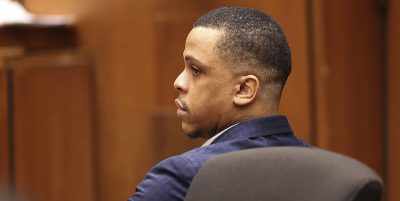 Aspiring rapper Eric Holder was convicted of the murder, in 2019, of Nipsey Hussle, a famous 33-year-old American rapper. Hussle was shot dead outside his clothing store in southern Los Angeles, and after his death more than 20,000 people attended a ceremony honoring him in which Stevie Wonder performed and a letter was read. by Barack Obama. Holder, who was convicted of first degree murder, has pleaded not guilty and faces life imprisonment.

Holder, who is 32, was arrested a few days after Hussle’s death, with strong evidence against him. During the trial, the New York Times wrote, Holder was presented as being quite close to Hussle and belonging to his own “gang”. It is thought that the two had an argument because Hussle had accused Holder of being (or in any case having been) a “spy”, a police informant.

Nipsey Hussle, stage name of Ermias Davidson Asghedom, was born and raised in Los Angeles and was part of a city gang as a teenager. His first record – Victory Lap – was released in 2018 and was nominated for best rap record at the 2019 Grammys. Hussle had also founded a record company, All Money In, with which he produced his own songs.

Managing memories is essential: the past continually influences your present

According to the United States, the attack on Darya Dugina was ordered by Ukraine – Ruetir

WhatsApp: yet another scam, but what is happening

Catalonia sneaks into Stranger Things, although you probably haven't noticed

Chile: They investigate possible fixed games in the Entel Honor League of League of Legends | Ruetir

If you still keep 5-peseta coins at home, these four are worth up to 40,000 euros

Killer Klowns From Outer Space The Game: The New Multiplayer Horror Title Is Coming In 2023 | Ruetir.com