Bacteria-based fuel: the idea of ​​some scientists to have sustainable planes and ships

Imagine a future in which ships, planes and rockets that have not yet been electrified or converted to hydrogen use a fuel that does not come from petroleum and, consequently, that has not gone through the polluting process of distillation of hydrogen. refineries. Instead, they use a one that has been produced by bacteria fed on plant matter.

This interesting alternative, added to other promising ones such as SAF and e-diesel, to name a few, could one day become a reality. At least that’s what a group of scientists at the Lawrence Berkeley National Laboratory in Berkeley, California think, who have discovered that a common bacterium can be used to produce energy-dense fuel.

We live in a world that needs to reduce greenhouse gas emissions as much as possible to mimic the progress of climate change. While the ideal would be to stop using fossil fuels, in the transition path towards clean and renewable energy sources we will still have to do so, especially when it comes to high density fuels.

However, over time, due to accessible reserves or geopolitical factors, obtaining the oil needed to produce the high-density fuels used by the maritime, aeronautical and aerospace industries has become increasingly difficult. The key could be in the work that bacteria have been doing for billions of years.

In addition, they assure that it will be much less polluting than conventional hydrocarbons. “This biosynthetic pathway provides a clean route to highly energy-dense fuels that, prior to this study, could only be produced from petroleum using a highly toxic process,” says study leader Jay Keasling.

Since these fuels would be produced from bacteria fed on plant matter, which is made from carbon dioxide extracted from the atmosphere, using them will significantly reduce the amount of greenhouse gases aggregates relative to any fuel generated from petroleum, according to the researchers.

When Keasling refers to the “highly toxic process” he is referring to the process for obtaining gasoline that we have been using since the 19th century and that almost everyone is familiar with. Once the oil is extracted, with all the difficulties that this entails, it is taken to the refineries where the types of hydrocarbons that make it up are separated.

This process, broadly speaking, consists of heating the oil to different temperatures so that the compounds with fewer carbon atoms in their molecules are easily released, the liquid compounds vaporize and also separate. This process, which is carried out in the distillation towers of refineries, emits highly polluting toxic gases.

The process of creating this biofuel is very different. It is based on the antifungal bacteria called Streptomyces, which are commonly used to create antibiotics. According to the researchers, molecules that work like Josamycin were synthesized. These molecules can convert sugars or amino acids into molecules made of cyclopropane rings called POP-FAMEs. 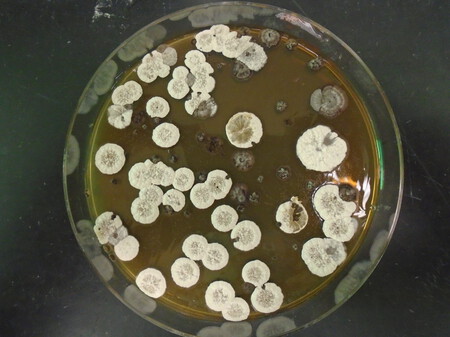 A culture of the Streptomyces bacteria

Unfortunately, at first the bacteria weren’t that cooperative when it came to creating POP-FAMEs, so “like a baker rewriting recipes to invent the perfect dessert,” they modified their technique and, after studying variations of the bacterium, rearranged the genetic map to find the best fuel candidate.

Now that they have identified the best candidate, the researchers are in the process of further increasing the bacteria’s production efficiency to generate enough for combustion tests. They are also investigating how the multi-enzyme production pathway could be modified to create polycyclopropan molecules of different lengths.

Although they have not yet produced enough candidate molecules for a combustion test, 10 kilograms of fuel are needed for this, the Pacific Northwest National Laboratory analyzed the POP-FAMEs with nuclear magnetic resonance spectroscopy and demonstrated the validity of the energy density values ​​that the researchers believed.

Once the field tests are done, the researchers will have to overcome other challenges, including developing a large-scale production method for this new type of fuel that is economically viable. Over time we will know if this alternative succeeds.

Apocalypse clock or end of the world: when will we know the new date for the end of humanity?

This 10-inch tablet from Lenovo turns into a digital frame and smart speaker when you’re not using it, and it’s €30 off

Will Meta reveal the successor to Quest 2 in the next event?

6 huge and very good games for Switch on offer: each one, for less than 8 euros