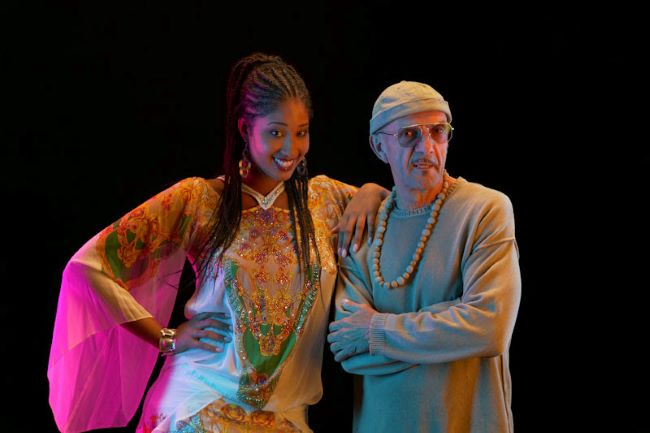 Born in Italy in October 1996, to a Senegalese father and an Italian mother. At eighteen Awa, after sharing the stage for a few years with Valentina (her aunt), decides to undertake her solo project

From 17 December it is available in radio rotation “Of Bridges and Worlds”, Excerpt from The V feat. Awa Fall excerpt from the ep “Invisible Sons” (PMS Studio), already present on all streaming platforms. A collective journey, an intimate journey, and an invitation to overcome together the prejudice and fear of those who do not have the same origin as you: this is the beating heart of “Di ponti e di mondi”, the result of the collaboration between EVs. and Awa Fall, one of the most interesting Afro-descendant voices in the European reggae / soul world. The result is a contemporary, deep and nocturnal r’n’b piece that is part of the EP “Figli Invisibili”, the winning project of the “Bologna City Of Music Unesco” competition and a musical initiative born from the mind of El V himself , who is its creator and artistic director. The realization of the EP was entirely entrusted to Afro-Italian interpreters, called to deal with the productions of artists such as Dj Jad and Ice One, among others. It is the first time that an EP has been released in Italy that involves the new faces of Italian music in order to underline the need for inclusion.

With the production and promotion of Efferre Live, the official video clip of “Di ponti e di Mondi”, directed by Davide Cocchi (Neffa, Skin and many others), alternates scenes portraying the musicians and performers of the piece with others they see Awa Fall proud and smiling at the wheel of a car, all wrapped in the suggestive background of a city in the middle of the night.

“Di Ponti e Di Mondi” is your new single, what is it about?

“Di Ponti e Di Mondi” is a song I wrote for the winning project of the Bologna City of Music UNESCO competition for new musical productions. Awa Fall plays him, an extraordinary Afro-Italian voice who made him his and took him to a higher level. Awa is a reggae / soul singer very popular throughout Europe, the meeting with her was enlightening, she immediately loved the song and put a lot of energy into her interpretation.

I wrote this song thinking of a declaration of love, for ourselves and for the people we meet along our path. A friend, listening to her, told me that it is a solemn prayer. It is the prayer of a deeply aware woman, sure that she will be complete even if the prayer is not heard. Our Awa with her sensitivity and her vocal skills, made a universal declaration of it. It is a contemporary r’n’b song, with a nocturnal flavor. The text has a precise direction,
but leaves the listener the opportunity to find their own interpretation.

The song is extracted from the ep “Invisible Sons”, how is it composed?

Figli invisibili is an Ep of 7 songs, produced by Efferre live who is my management, with the contribution of the Municipality of Bologna. The peculiarity of this project is the interpretation of each song, there are 7 in this production, entrusted to all Afro-Italian and one Italocuban interpreters. This happens for the first time in Italy. A record product had never been made with original songs, written and composed for the occasion, all entrusted to new faces of Italian music. We have also put these artists in collaboration with Italian music producers such as Dj Jad (Ex Article 31), Ice One historical producer of Italian hip hop of songs such as Quelli che benpensano by Frankie Hi NRG and Frank Nemola, by Vasco Rossi’s band, among others. The main purpose of this project is the need, today more than ever, to highlight the need for inclusion and acceptance of people from another origin.

The Invisible Children project was born from my long experience alongside people who come from another part of the world. Since the beginning of the 90s I have collaborated with African artists. I have been collaborating with Latin artists for years. Over the years I have collaborated with associations such as Amnesty International, Italy-Cuba and Emergency. But one of the main components that gave birth to the idea of ​​this project is my niece. My brother adopted a Cambodian girl who arrived in Italy at the age of 4. Now she is 17, she is a beautiful high school student, Italian in all respects, including legal ones, and despite her funny Bolognese accent, she has yet to explain in everyday life who she is and why she is in Italy. I strongly believe that we must work to overcome this prejudice that is no longer tolerable.

Chiara Ferragni: she decided to do it for Sanremo

The Princess, the violent alternative to Cinderella

The beautiful story of Terra, the stray dog ​​adopted by two German boys on holiday in Puglia

Album of the provinces of Savona and Imperia, events and shows from 2 July

Bookings boom for the summer in Liguria: “Forecasts higher than 2017”