Following the ‘regular’ Super Duke, KTM has now also given its 1290 Super Duke GT a mild update. In addition, the ravishing sporty tourer has not only been lifted into the Euro5 era, the equipment will also be on a higher plane next year.

But start at the beginning, so the block. The Austrians recently announced that its illustrious LC8 aggregate had entered the Euro5 era, so it was a certainty that the Super Duke GT would also be equipped with it. Thus it happened, whereby the GT is anything but meager in terms of performance, even in its latest appearance. With 175 hp at 9,750 rpm and 141 Nm at 7,000 rpm, you are more than eligible for the designation ‘sporty touring machine’.

That sporty quality will get an extra boost next year thanks to a set of new cast wheels, which also serve on the Super Duke R. These are one kilogram lighter than the previous models, weight that is also saved on the unsprung mass. Which, in turn, should benefit the light-footedness. The wheels come in combination with new, nice and sticky rubber in the form of Continental ContiSportAttack 4 tires.

Furthermore, the 2022 Super Duke GT, which, like the current model, will of course also have access to the semi-active WP Apex suspension, will also receive a new 7-inch TFT display with the new (illuminated) joystick switch unit of the Super Duke R. And interestingly, the new dashboard provides Turn-by-Turn Plus navigation, which again works via the KTM Connect app. Navigation prompts are displayed on the dashboard, and the system is also available offline. So you can plan and load your trips in advance.

The 1290 Super Duke GT, which is only available in orange, will be available at the dealer from January. Prices are not yet known. Info: www.ktm.nl 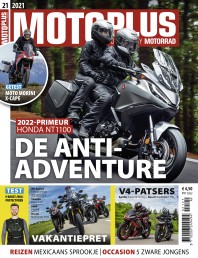 Tested: has Flitsmeister lost its way with this gadget?

First European away game volleyball players Apollo 8 immediately a very important one: "Certainly not without a chance"