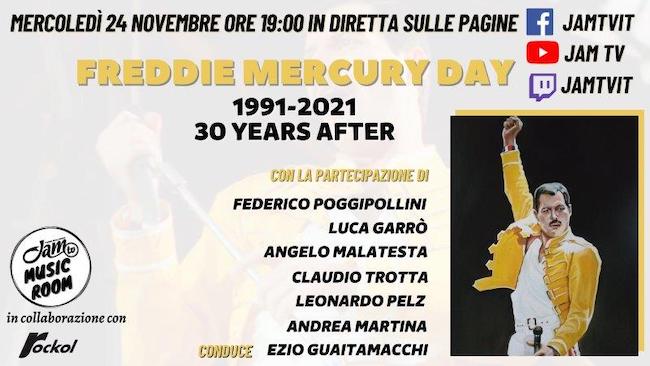 Tomorrow, Wednesday 24 November 2021, just for one day …, JAM TV (the musical web TV founded and directed by Ezio Guaitamacchi) dedicates a special program to the great Queen frontman with exclusive interviews, ad hoc services, in-depth columns and an episode special of the “Music Room” (live on Facebook, YouTube and Twitch) in collaboration with Rockol focusing on the art of Freddie Mercury.

On November 24, JAM TV (www.jamtv.it) turns into a Freddie Mercury Tribute Show to remember the art, charisma, voice and music of Queen’s front man exactly 30 years after his death.

On November 24, 1991, just before 8pm, Farrokh Bulsara’s heart stopped beating. Freddie Mercury died in his London residence, the Garden Lodge, in the borough of Kensington, assisted by a small circle of friends. Just two days earlier, in a press release written together with his manager Jim Beach, he had made public his illness: AIDS.

For years, he had struggled undergoing all possible treatments even with experimental drugs. But, two weeks earlier, he had decided not to take anything …

30 years later, the myth of Freddie Mercury day November 24, 2021 is more alive than ever. His unforgettable voice continues to ring in the ears of fans and his songs, some of which have become authentic anthems, are now part of the most classic rock songbook.

Ezio Guaitamacchi will lead the audience to the places that have marked Mercury’s personal and artistic life (from Zanzibar to India, from London to Montreux) and will tell the stories behind some of Queen’s songs. Peter Freestone (personal assistant and friend of Freddie, by his side until the last day) will talk about his human and professional relationship with the great artist in an exclusive interview from his home in Prague while Angelo Malatesta, Italian representative of the Mercury Phoenix Trust , will explain Freddie’s legacy and his history with Brian May.

Zucchero and Darkness bassist Frankie Poullain will remember their passion for Queen, their participation in the tribute concert at Wembley and their experiences of artistic collaboration while other Italian artists (Andrea Mirò, L’Aura, Moreno Delsignore, Sugarpie & The Candymen) will give away specially for JAM TV some covers of Queen in an acoustic key.

Also tomorrow, Wednesday 24 November, live from 19:00 to 20:00, a special edition of the “Music Room” (the musical talk show where we talk about music) will have as guests Federico Poggipollini, Ligabue’s guitarist, Claudio Trotta (promoter) Luca Garrò (author of a biography of Freddie Mercury), Angelo Malatesta (musician of the ’39 Queen Tribute), Leonardo Pelz (“Archivist” and external collaborator of the Italian Queenian Community) and Andrea Martina (founder and manager of Queen Forever Blog).

The secretariats are the engine of the school

Maratona dles Dolomites, Indurain will also be there: “Beautiful event with a mythical path”

Cremonini on tour, tonight the grand finale in Imola

Accident between West Genoa and Bolzaneto: a section of motorway blocked, serious motorcyclist