This year they were no longer included in the Kawasaki range, the H2 SX and the H2 SX SE, but next year Kawasaki dealers will welcome the second generation of these compressor guns in their showrooms. And also a new Versys 650!

Visually and mechanically, both the H2 SX and H2 SX SE are closely related to their predecessors, except for some minor Euro5 adjustments, but there was little to complain about in terms of aerodynamics and power. Also in the latest trim, the 998cc compressor four-cylinder is good for 200 horsepower at 11,000 rpm. In order to meet the Euro5 standard, the exhaust system has been revised, whereby the front silencer has been dropped in favor of a muffler with more volume, a larger catalytic converter in the collector pipe and a sub-catalyst in the rear silencer. The layout of the exhaust bends has also been changed, with the additional advantage of more torque between 4,000 and 8,000 rpm, a rpm range in which you often stay. 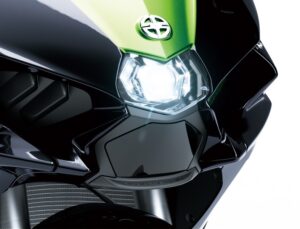 Bigger news is undoubtedly the application of a Bosch radar system, of which the front sensor is located under the headlight and the rear one in the rear fender. This is linked to a new IMU and ECU and works under the name Advanced Rider Assistance Systems (ARAS). Part of this is adaptive cruise control, where the system automatically ensures that you keep a safe distance from the vehicle in front of you. Through Forward Collision Warning (FCW) it can also warn if a collision with a vehicle in front of you is imminent. The rear radar sensor monitors the environment around the engine and warns you with an LED signal in the mirrors when a vehicle is in the blind spot, Blind-Spot Detection (BSD).

In addition, the extensive package of electronics, including integrated power modes, driving modes and traction control, already on the H2 SX, has been expanded with Vehicle Hold Assist (VHA), which facilitates stopping and starting on a slope. Also new is ESS, Emergency Stop Signal, where the rear light starts flashing quickly if you suddenly have to brake very hard. And now that we’re all in the abbreviations; the KIPASS keyless key system allows the H2 SX to be removed from the steering wheel lock and switched on remotely. Also standard is a Tire Pressure Monitoring System (TPMS), which monitors your tire pressure, heated grips and a USB connection under the seat. All information about the various active systems can be found on a new 6.5-inch TFT display, which can be linked to the Kawasaki SPIN app, with which you can conjure up much more information on the dashboard via your smartphone.

Unlike the ‘standard’ H2 SX, the SE version is fitted with Brembo Stylema monobloc brake calipers. Both models also have a new Bosch 10.3ME ABS module. And like the Versys 1000SE, the H2 SX SE features Showa-Skyhook electronic suspension. Both models come in a black/green color scheme with minor differences. A price has not yet been announced.

Where the Versys 1000 models received an update last model year, it will be the turn of the Versys 650 for 2022, which will receive a facelift and traction control, among other things.

A glance at the front and the fuller flanks of the 650 is enough to see that the design of the light crossover now resembles that of the Verys 1000. The compact beak, the shape of the nose; they have now become real family traits. This also applies to the new window, which can be easily and quickly adjusted in four positions over a total adjustment range of 80 millimeters by means of an adjustment system, which we know from the 1000 and the Ninja 1000SX, and in particular improves travel comfort. Behind that window you have a view of a new 4.3 inch TFT dashboard with smartphone connectivity. The 650 is also equipped with LED lighting all around, including the beautifully compact turn signals at the front and rear. 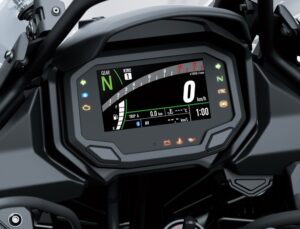 Just like the suspension and the well-known 17-inch wheels, the economical 649cc and 67 hp parallel twin has remained unchanged. However, there is now standard traction control with two modes on board. The first is the most sporty and intervenes relatively late, while the second mode intervenes earlier as soon as wheelspin occurs. In addition, the traction control can also be turned off. Incidentally, the traction control of the 35 kW version of the new Versys for the A2 driving license has only one mode and this can also be switched off as desired. The new Versys 650 will be available at the dealer from February 2022 in the colors green/black, black/grey/red and black. The price will be announced at a later date.

Agag: “Synthetic fuels are not the solution” | Ruetir