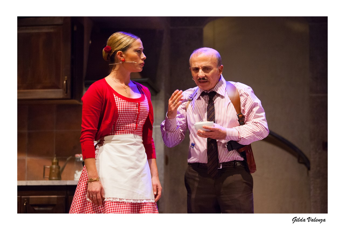 Already floating in the crisis is not easy, paying debts is even less so, fight against Equitalia and the Revenue Agency it is a ‘business’ also in the commercial sense of the term: but if, then, it is unleashed against even the mother-in-law, then surviving the daily war without becoming a wreck of society borders on the famous ‘mission impossible’ … Yet, it is the game at the massacre from which the protagonist of must try to get out alive ‘Scrapping of a good Italian’, specifically a restaurateur of a suburban trattoria, played by Carlo Buccirosso, that of the comedy staged from tomorrow to December 5 at Quirino theater in Rome he is also an author and director.

Everything revolves around the figure of Alberto Pisapia, “a man now on the verge of bankruptcy – Buccirosso explains in the director’s notes – married to a sanguine woman with a combative character, father of an anarchic and irascible daughter and a son who is quite the opposite. The protagonist of the comedy has been living in a situation for years great psychic discomfort, which in recent times has taken on the shape of a real one nervous breakdown“.

Because of economic crisis in the country and its own restaurant business, but also following a series of reckless investments, “finds himself having to fight a personal and desperate battle against the ruthless attacks of Equitalia, which with inexorable precision hits him almost daily in the quiet of his home, mortgaged for some time, with tax bills of all types, of all kinds, of various shapes and consistencies “. And, moreover, this ‘war’ has another enemy staff: the mother-in-law, an upright official of the Revenue Agency:” the wickedness of this woman – underlines again the author is an indestructible cancer that not even the most advanced medicine would have been able to eradicate “.