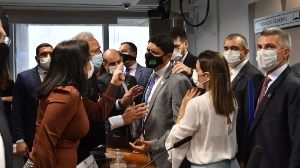 In testimony to Covid’s CPI, Wagner do Rosário, minister of the CGU (General Comptroller of the Union), said today in testimony that senator Simone Tebet (MDB-MS) was “totally out of control”. The statement raised tensions at the session, which was suspended because of the turmoil, and government member Jair Bolsonaro was called a brat by senators.

After the confusion, the chairman of the commission, Omar Aziz (PSD-AM), ended his testimony. Rosário went from being a witness to being investigated at the CPI, which sees evidence of the CGU’s omission in the Covaxin case.

Opposition and independent senators came out in defense of Simone Tebet and said that Rosario was being sexist. The minister had been questioned by the senator about the actions of the CGU during the negotiations of Need Medicines with the Ministry of Health, shrouded in suspicion of irregularities.

Simone affirmed that the press pointed out irregularities before the CGU and said he congratulated the “work of the organ, but not the work of the minister”. This is because, in his view, Rosário should not have defended an “irregular contract that is under investigation by the CGU itself” in a press conference.

“I am very sorry for the role that Your Excellency is playing, the disservice to the country, to public money. You are not the lawyer of the President of the Republic, the Minister of Health, or the lawyer in the structure of the CGU. You have to act as an organ. preventive inspection and control. So, it’s inverted. Instead of having a suspicion that was denounced in the CGU’s head, they decided to do the defense attorney process.”

The senator also said that the episode reminded her that “we already had an Attorney General of the Republic who pulled out a drawer and now we have a controller General of the Union who wipes the lights, lets things happen.”

Speaking after the senator, Rosário “recommended” that Simone “read everything again”, because the information given by the senator would be incorrect, he said. They then started to talk. Simone said that the data presented were the result of her own work and that of advisors to her office. Out of the focus of the TV Senado camera, there was a senator who called Rosário a “kid”.

Tension in the CPI plenary continued to rise. Simone said that Rosario was “behaving like a spoiled boy”. In response, he said the senator was “out of control.”

Don’t call me spoiled boy, I didn’t hit you. The lady is totally out of control.”
Wagner Rosário, minister of the CGU

From then on, tempers rose even more, with most senators criticizing Rosario’s speech. “Machista”, “Are you thinking where you are?” and “Moleque de message” were some of the demonstrations against Rosario. One of the most exalted was Senator Otto Alencar (PSD-BA).

[Wagner Rosário] It’s not a coordinator, that’s a kid. One brat, one brat, dick sent [do governo].”
Otto Alencar, senator

Rosário and most of the senators got up from their tables and started to discuss more closely. Omar Aziz initially suspended the CPI meeting and then announced that it would be adjourned for today, not without first stating that Rosário will go from being a witness to being investigated.

Security agents at the meeting were on standby and approached Aziz and Rosário when he got up, but there was no record of physical violence.

Senators Leila Barros (Cidadania-DF) and Marcos Rogério (DEM-RO) were still banging their mouths on the microphone, until it was cut off.

After the tumult, in the corridor of the Senate where the committees are located, Simone said she had spoken with the minister and that the episode is “a page turned”.

he made a request [de desculpas] private, although it should be public, and for me it’s a turning page.”
Simone Tebet, senadora do MDB-MS

The senator stated that the minister of the CGU, after the two talked, “took a while”, but “understood that he got excited”.

Senator @SimoneTebetms. Despite having done it in person, I reiterate my apologies if my words have offended you. Sometimes, in the heat of a fight, we are unconsciously aggressive. I extend my apologies to all women who have been offended.

Marcos Rogério defended the minister of the CGU, said that he was provoked and stated that the statement against Simone was “out of tune”.

“[Rosário] it was all the time provoked. He was called a prevaricator by the president of the CPI. In the end, during Senator Simone’s speech, during her provocation, comparing him to the ‘general drawer’, he gave an out-of-tune response. Not suitable. Not just because she’s a woman, because she’s at the CPI. You can’t do it with any senator. I think it was an off-key, unnecessary reaction,” he said.