13.47 – This is the sky above Misano, dry track and the light rain seems to have stopped – for the moment.

13.42 – This is the choice of tires for the drivers on the grid, as you can see the combinations are quite different. With threatening clouds on the horizon and a possible drop in temperatures, riders could opt for the front average. 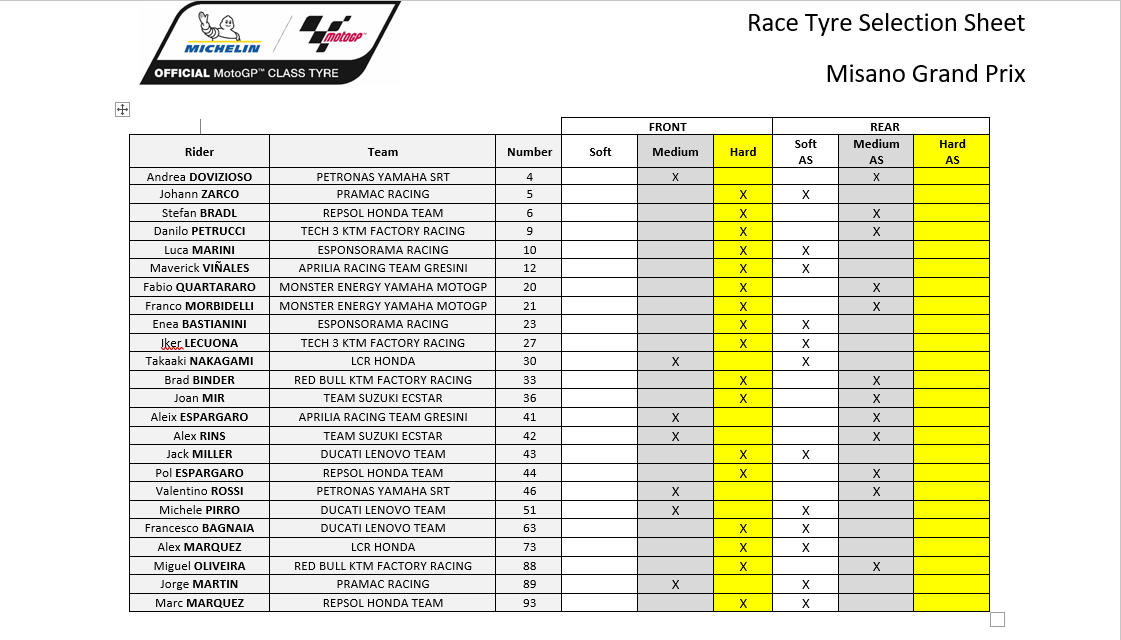 13.40 – Only a few sporadic drops of rain for now, not enough to make a difference. At least for the moment …

13.35 – The drivers are preparing and starting to take their places on the starting grid.

The riders pour out onto the grid! 💨

Could we see more pit-lane activity during the 27 Lap race? 🙌#SanMarinoGP 🇸🇲 pic.twitter.com/i2oFnQTjLp

13.32 – The sky is scanned in the paddock and the teams prepare the second bikes with wet tires. The track is still dry, like at the end of the Moto2.

A few spots of rain in the air… 🌧️

Less than half an hour until lights out! 👀#SanMarinoGP 🇸🇲 pic.twitter.com/BECxMPoxkc

13.28 – A few drops of rain begin to wet the Romagna track, the air temperature 26 °, the asphalt temperature 29 °. The sky is covered with clouds.

13.25 – This is the starting grid for the Misano MotoGP class. There will be 24 riders in the race: there is the return of Franco Morbidelli on the Yamaha and Andrea Dovizioso on the Yamaha of the Petronas team, plus Stefan Bradl (Honda) and Michele Pirro (Ducati) will be present as wild cards.

13.20 – The weather remains uncertain, with forecasts always giving a 50% chance of precipitation for the race start time.

13.15 – In Moto2 the victory went to Raul Fernandez, who preceded Remy Gardner and Aron Canet. At the end, a few drops of rain on the “Marco Simoncelli”.

In Moto3 Dennis Foggia affirmed, with an all-Italian podium completed by Niccolò Antonelli and Andrea Migno.

13.10 – After thirteen races, this is the top 5 in the world rankings, with Fabio Quartararo (Yamaha) leading the group with 53 points over ‘Pecco’ Bagnaia (Ducati) and 57 over reigning champion Joan Mir (Suzuki).

Fefè De Giorgi, from the field to the bench, always among phenomena! His career in photos

Learn to live with expensive houses in the big cities

Energy poverty? The Hague is experiencing a purchasing power cramp

Fefè De Giorgi, from the field to the bench, always among phenomena! His career in photos