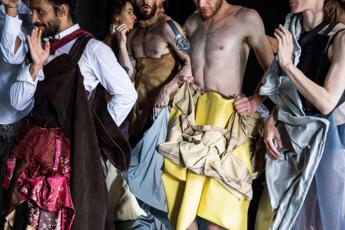 After the inauguration with the show ‘Mobius’, signed by Rachid Ouramdane of the Compagnie XY, the programming of the Romaeuropa Festival (general and artistic direction Fabrizio Grifasi) continues, at the cavea of ​​the Auditorium Parco della Musica, with Israel Galvan (on the 18th and 19 September) and the special live by Max Richter (20 September), a single Italian date realized in co-realization with the Musica per Roma Foundation.

The XXXVI edition promises to be one of the richest editions of its long history, embracing with the colored trait of music, theater, dance, the new circus, digital arts and creation for children the years 2020/2021 and placing at the center of his work the strength of the communities that find themselves in the spaces dedicated to the arts and culture, the ritual charm of the performing arts with their visionary nature, the multiple sounds that guide our emotions, the new writings for the stage, the experiments linguistics and aesthetics but also attention to the demands of a ‘new present’ with the fragilities, sensitivities and themes that emerged during the pandemic but already at the heart of the Festival’s history.

Second appointment of the season with the flamenco star Israel Galvan who from 18 to 19 September returns to inflame the festival together with the musician Niño de Elche with a volcanic show in which tradition, innovation, surrealism and revolution are mixed and, on September 20, in co-realization with Fondazione Musica per Roma, the British musician Max Richter for a single Italian concert in which he will perform two compositions that have become a cult of contemporary classical music, ‘The Blue Notebooks and Recomposed: Vivaldi’s The Four Seasons’.

On the other hand, the show ‘Pieces of a Woman’ signed by screenwriter Kata Wéber and director Kornél Mundruczó for Tr Warszawa is staged at the Argentina Theater until 19 September which, together with the first theatrical direction of the international cinema icon Gus Van Sant dedicated to the eccentric figure and the universe of Andy Warhol, opens a long path in the field of international theater in which the director Alexander Zeldin, the duo Azkona & Toloza, the Rimini Protokoll company, the director Pedro will be protagonists. Penim and the dancer Filipe Pereira for Teatro Praga, directors Ersan Mondtag, Mohamed El Khatib and Valérie.

Protagonists of the Italian theater scene are Ascanio Celestini, Carlotta Corradi and Andrea Collavino, Daria Deflorian and Antonio Tagliarini, Elvira Frosini and Daniele Timpano, Fabiana Iacozzilli, Dante Antonelli as well as the protagonists of the Anni Luce section curated by Maura Teofili who in addition to the performances of Tatjana Motta and Camilla Brison, Secteur In.verso and Francesco Laineri continues its path of promotion and support to emerging creativity with two different projects, ‘Powered By REf’, a training course, tutoring and paid residency dedicated to Under30 which will see the selected projects as protagonists by Valeria Wandja with Yonas Aregay and Giulia Odetto and the path on the new dramaturgies Situazione Drammatica conceived by Tindaro Granata and hosted by Anni Luce in a special format aimed at the most important dramaturgy prizes, the Hystrio Prize and the Riccione – Tondelli Prize.

The Vivo D’arte prize promoted by the Ministry of Foreign Affairs and International Cooperation, won this year by the Kors’ia company, Dnappunti choreographers with the choreographers and finalist choreographers Luna Cenere, Adriano Bolognino, CGJ collective Giulio and Jari, Pablo Girolami and finally the Bangarang project signed by Giulia Crispiani and Scomodo and curated by Sara Alberani and Valerio del Baglivo.

The appointments with the great international dance of the festival with Dada Masilo, Dorotheé Munyaneza, Alice Ripoll, Trajal Harrell, Emanuel Gat, Claudia Castellucci (Societas) in a dialogue also develop in the sign of dialogue with music, cultural contamination and multidisciplinarity between his dance company Mòra and the Cantors of the Byzantine Choir of musicAeterna of St. Petersburg, Christos Papadopoulos, Maria Campos and Guy Nader, the CollettivO CineticoO led by Francesca Pennini, Roberto Castello, Jesús Rubio Gamo and for the Dancing Days section curated by Francesca Manica, Ginevra Panzetti and Enrico Ticconi, Sofia Nappi and Davide Valrosso, Victor Černický, Stefania Tansini, Iris Karayan and Collettivo Mine, Connor Schumacher and Simona Bertozzi.

The Cultural Fostering project, curated in Rome by Casa dello Spettatore also proposes to mobilize, against educational poverty, ‘resource families’ by enhancing the experience of family fostering with a view to a shared and inclusive use dedicated to the little ones of the show. live.

For children aged 7 and up there is also a dedicated ‘What do you want them to understand about this?’ Margherita Vicario’s project planned as part of Line Up !, a new line of investigation into the languages ​​and new trends of Italian pop, starring Rachele Bastreghi, the female soul of Baustelle, Emmanuelle, Ditonellapiaga, Boyrebecca, La Nina and Bluem.

The format ‘The words of songs’ of the Institute of the Italian Encyclopedia founded by Giovanni Treccani is dedicated to the protagonists and protagonists of Italian music and literature which, at Villa Medici, proposes a cycle of dialogues between Ginevra and Francesco Pacifico, Mahmood and Teresa Ciabatti, Fulminacci and Alice Urciuolo, Margherita Vicario and Djarah Kan, Amir Issaa and Igiaba Scego.

Digitalive, the section that investigates digital cultures unfolds a program dedicated to the most cross-over creations between electronic music, performances, videos and works in VR (Virtual Reality) with Elio Germano, Donato Dozzy and Eva Geist, Not Waving, Colin Benders and Marta De Pascalis, Francesco Luzzana, Coralie Vogelaar and the online based projects of Mara Oscar Cassiani, Fuse * and Artificial Humanism.

The Gran Finale of the Romaeuropa Festival 2021 is still in the sign of music, which takes place over two days at the Auditorium Parco della Musica, presenting the young composer Vittorio Montalti together with Blow Up Percussion and Tempo Reale, Edison Studio with the live performance of a column sound for the images of the film ‘Inferno’ from Dante Alighieri’s Divine Comedy, Olivier Dubois with a show / concert dedicated to the Egyptian Electro Chaabi, the linguistic exploration signed by the electronic genius Alva Noto in dialogue with the writer and performer French Anne James-Chaton, a live special by the Intercontemporain Ensemble, founded by Pierre Boulez and a concert in which the music of Steve Reich dialogues with the video images produced by the German painter Gerhard Richter.

Rai confirms itself as the main media partner of the festival with its channels dedicated to culture and entertainment. Rai Cultura which will broadcast in the autumn months the complete Möbius, the inaugural show of the thirty-sixth edition of the festival, Rai 5 which will produce a special documentary to explore the themes and voices of this edition, Rai Radio 3 with its insights into contemporary dramaturgy, the Dramatic Situation talks conducted by Antonio Audino as well as the dissemination activities well represented by the creation of a commercial aimed at reaching a wide and varied audience.

Are politicians a mess? In SuperPower 3 you can prove the opposite while you dominate the world

Big Brother: Here’s who they are and when the new competitors come in

Sanremo, a councilor without a Green pass removed from the Municipality

How wonderful Emma Marrone: the towel does not cover her shapes