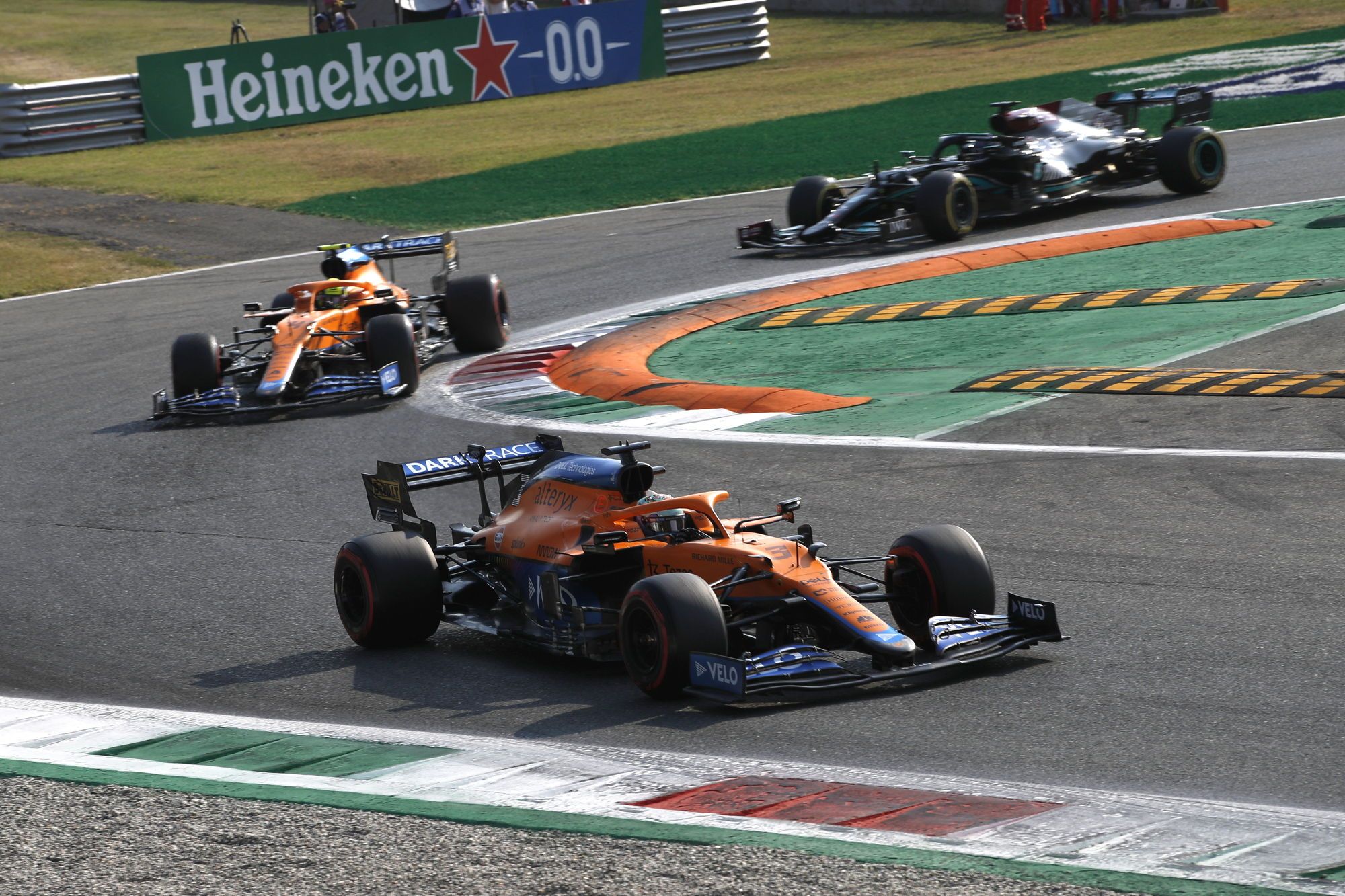 The 2021 Italian GP claims its first victim even before the race starts. Yuki Tsunoda previously complained about a sticking accelerator pedal and apparently the team can no longer solve that problem. His car remains in the pit box. It won’t be the last dropout.

Ricciardo is gone as soon as the lights go out and he forces Verstappen to second place. Hamilton is soon past Norris, but has to give this place back quickly because he is inhibiting himself. Behind the crowd, Giovinazzi flies off the track after a touché with Sainz and the Italian loses his front spoiler. Fortunately, he can make it to the pits and continue his home race.

It’s a parade up front

In the first twenty rounds, little changes in the top four. Norris is doing his very best to hold off Hamilton, and he succeeds very well. Good for Ricciardo and Max, because those fights take time. Further back, Perez fights fiercely with Sainz, but there is no changing of the guard there either. Leclerc is in between in fifth place.

On lap 21, Verstappen overshoots under braking in an attempt to pass Ricciardo. This fails and Verstappen shoots over the curbs. Fortunately, he doesn’t lose a spot, because the gap with Norris is big enough. Ricciardo goes in not much later so that Verstappen goes to first place.

Shortly afterwards, Verstappen has to go inside. That’s where the tire changes go wrong. The pit stop lasts more than 11 seconds where it normally takes 2 seconds. This delay has major consequences, because if Hamilton enters a little later, the Mercedes will return to the track next to the Red Bull. The unfortunate timing means the end of the race for both.

The two drivers both don’t admit crashing into each other in the first corners. Hamilton slides under Verstappen and they shoot into the gravel. They can no longer drive away and the race is over for both of them. Zero points for both drivers. A safety car comes onto the track and the field comes closer together.

When the safety car is gone

The McLarens keep up the pace and eventually Ricciardo and Norris take first and second, with Perez behind. Bottas is right behind, but is more or less thrown into third place by Perez. The Red Bull driver leaves the track in turn five and gains an advantage. He gets a five-second penalty.

In the end, Ricciardo and Norris cross the finish line first and second. In the final phase it is very exciting for Red Bull. Perez has to keep a gap of five seconds with Bottas due to his time penalty to get his third place. He cannot do that and Leclerc can also drive close enough to Perez to overtake him in the final standings.

A great performance from Bottas, who started at the back. Ricciardo eventually takes the fastest time in addition to the victory. Both drivers are – quite rightly – over the on-board radio.

This is what can happen to your private data after a data breach: ‘BSN number and address for sale’

What to do with a six-year-old who doesn’t like the move?

This is what can happen to your private data after a data breach: 'BSN number and address for sale'