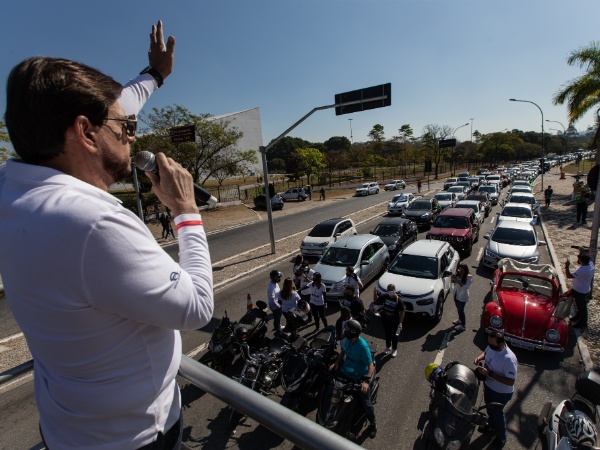 “May we see this pandemic rebuked,” said the apostle Estevam Hernandes in front of a sea of ​​cars. It was the Carreata da Solidariedade, which took to the streets of São Paulo this Saturday (24) as a motorized version of the Marcha para Jesus.

For the second year in a row, the Covid-19 crisis forced Estevam and his wife, Bishop Sonia Hernandes, to postpone the evangelical act they had envisioned 28 years ago.

The electric trio with the couple-founders of the Apostolic Church Renascer em Cristo left at around 1:30 pm, followed by a caravan of cars and some motorcycles and bicycles, packed with soul and gospel marches that used lyrics like “our general is Christ” .

Wearing a mask from a network of gyms and a blouse made by the church, deputy Poconarista Carla Zambelli (PSL-SP) transmitted, sometimes on her knees, the preaching of Estevam and Sonia to her virtual followers. “We are going to prophesy life, healing, health”, asked the bishop. Her husband called out a prayer for the nation (“the pride of Brazil, always”) and quoted Psalm 23, “Happy is the nation whose God is the Lord.”

The mayor of São Paulo, Ricardo Nunes (MDB), later attended the shows held in a drive in scheme, in an Anhembi pavilion.

As the vehicle passed by the Bishop Tid Hernandes overpass, the apostle, who remained wearing a mask for most of the journey outdoors, evoked a “great move of salvation over this nation.” One of the three children of the neo-Pentecostal couple, Tid died in 2016, aged 37. He was hospitalized for seven years for complications from stomach reduction surgery.

While crossing 23 de Maio Avenue, one of the main avenues in the city, Bishop Sonia led choirs like “São Paulo is Jesus, Brazil is Jesus”. The faithful further back in the line of cars — which occupied two of the four lanes on the road — had the option of listening to the church’s radio station, Gospel FM.

Church members distributed Brazilian flags to drivers and passengers. Here and there, a pennant of Israel rose from the sea of ​​vehicles.

The motorcade is, in the words of the apostle, a heat for the March to Jesus, which always takes place in the middle of the year. The pandemic, however, pushed the event to November, if it cools down by then.

The biggest event on the evangelical calendar in Latin America, the March usually attracts politicians, especially in election years. It was there that the then presidential candidate Jair Bolsonaro paraded backstage with Magno Malta (PR-ES). The senator at the time was, according to the retired captain, the “deputy of dreams” and received a “love letter” with an invitation to the ticket. Once elected, Bolsonaro jettisoned the government’s ally.

In 2009, the current president, Lula (PT), sanctioned a law that institutes a National Day for the March (60 days after Easter Sunday). A decade later, Bolsonaro went down in the event’s history as the first president of the Republic to participate in it. Hailed by the public as a myth, he attributed his victory at the ballot box to God: “It was He who gave us the Presidency.”

This week, the apostle reaffirmed in an interview with leaf his support for the president who won seven out of ten evangelical voters. A fan of motorcycles, Estevam was in the last Pocket Biker in São Paulo and continues to accelerate with the head of the national Executive, a Catholic married to the Evangelical Michelle in 2013, in a ceremony celebrated by Pastor Silas Malafaia.

If in 2018 the religious leader told the story, during a March, that the candidate Bolsonaro needed to preach more love and tolerance, three years later his opinion was different. “Look, I think he is the president of honesty, which has many important proposals for the country. We are living in the republic of hate, and then it becomes very complicated to talk about tolerance.”

Hernandes did not, however, want to say that he will continue with the president in the election. “I obviously, in terms of the president, I tell you that only if there is a sudden, radical change that makes me change my position. But 2022 is still a long way off. It’s a scenario that we have to wait, observe.”

FIFA 22 will continue with FUT loot boxes, but will also have a friendlier option | LevelUp

Diniz after debut with draw at Vasco: “It’s hard to explain CRB’s goal”

Analysis of Lost Judgment for PS5 in 3D Games

Cruzeiro has a goal disallowed by the VAR, draws with Operário, and Luxa is sent off