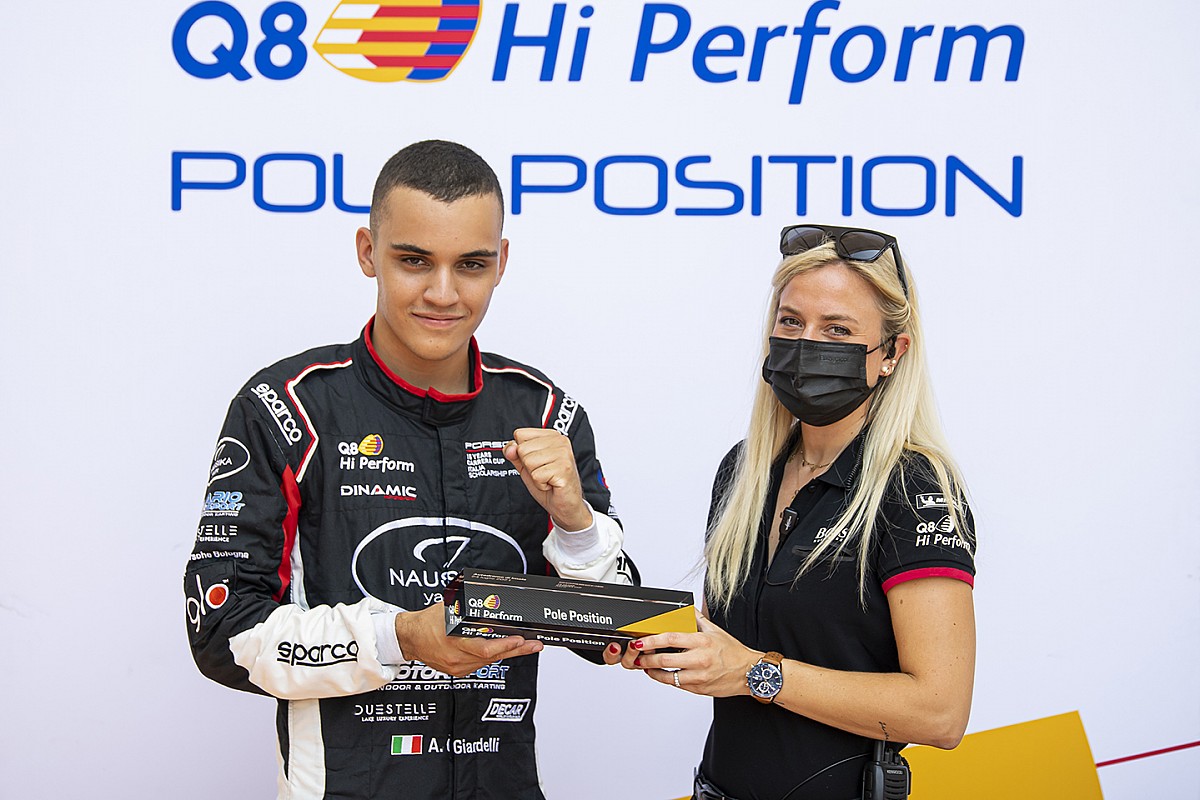 We had written in huge letters that in the official tests it was possible to reset compared to what we saw in yesterday’s free practice, but in Imola in the third seasonal qualifying of the Porsche Carrera Cup Italy, perhaps the least predictable event happened. That is, that two young people from the Scholarship Program, among other things on a track where experience can make the most difference, conquered the front row.

That both Ale Giardelli and Giorgio Amati succeeded with the Dinamic Motorsport 911 GT3 Cup is not a coincidence, with the Emilian team really appearing on the ball, as was already evident from Iaquinta’s words in the post-free practice session. And certainly having months behind even his teammate and reigning champion is not a factor to be underestimated, even if the Calabrian driver has partly facilitated them by “pulling” a bit of wake on both of them.

But let’s go in order, because Amati was initially ranked 12th after his best times were canceled for track limit at the Piratella. After re-evaluation, the lap of 1’43 “106 scored by the Rimini rookie was considered valid in post-qualifying. Not bad, because beating Alberto Cerqui by just 15 thousandths (more unfortunate with track limits, in his case at the Variante Alta ) Amati saw the front row return behind his teammate from Lecco.

For his part, Giardelli took his first pole in the Porsche Italia series (which is also the first for the Scholarsip Program 2021, as well as his first podium) by lapping in 1’43 “024, just one tenth from the Enrico Fulgenzi’s record: “Great shot – he said the 19-year-old driver from Colico at the qualification award ceremony – and on a particularly difficult track and in front of experienced riders it is even more beautiful. We are very happy and now loaded for the race. The secret? Commit and always give your best and try to make as little mistakes as possible “.

Sounds easy, in words. Giardelli confirmed the talent that had already been more than glimpsed in previous outings and now the three points of the pole position bring him even closer to those ahead of him in the standings, bringing him to minus 17 from Cerqui and minus 8 from Gianmarco Quaresmini: “I try not to think about it so as not to put pressure on myself, however it is inevitable to take a look at the general classification as well. But now let’s see what we can do in race 1 “.

Returning to Amati’s second place, it is clear that the recovery of his tampo has redefined all the positions behind the first row up to the 12th position. Behind the Dinamic duo, Cerqui and Fulgenzi will sit in the second row, followed in order by Iaquinta (5th), Festante, Moretti, Quaresmini (8th), Caglioni, Moncini, Gattuso and Cazzaniga.

The timing of qualifying

“I saw him approach that poor dog with something in his hand. I couldn’t understand what his intentions were until I looked closer.”

Another load of new emoji: do we still need it?

Ducati mourns Paul Smart, who died in an accident