Whirlpool, workers in revolt in Naples: the airport blocked. VIDEO

More chaos on the case of layoffs Whirlpool, the factory in via Argine a Naples who yesterday announced the closure of the site. A hundred workers today gathered in Capodichino airport to protest against the resolution of the American multinational. “If the company does not go back on its decision, the social tension will be difficult to manage”, underlined the secretary of Uil Campania, Giovanni Sgambati. Concluded on in the inside the airport, the workers went with a procession towards the roundabout of viale Maddalena where the city ring road joins to block traffic.

“Whirlpool is not a company in crisis, the choice to start the dismissal procedure is linked to the market and profit. Whirlpool is violating the agreements made with the Government. The workers have managed to keep the factory open in these di two years of mobilization. The PNRR must do its part: the South risks deindustrialisation while huge funds arrive to companies. It was absolutely clear that with the release of the layoffs we would find ourselves in this situation. Foreign funds and multinationals must have constraints linked to industrial policies, otherwise the logic of profit prevails. The government intervenes forcefully “, he declared Francesca Re David, general secretary Fiom-Cgil, speaking on the program Agorà Estate.

Even the president of the Campania region, Vincenzo De Luca, underlines the “unsustainable gravity of the situation”. “We hope that the meeting with the Prime Minister, Mario Draghi, can represent a turning point in the dispute”, continued De Luca. “Realistically it is necessary to use the next few weeks to engage one of the large companies in our country in a serious and credible plan of reindustrialization – added the president of the Region – the workers are available. The Region reconfirms its support, including financial support for a hypothesis of reindustrialisation. that truly guarantees the work for the hundreds of Whirlpool employees. “

WATCH THE VIDEO OF THE PROTESTS: 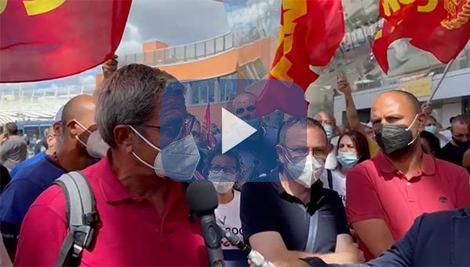 In the meantime, in the middle of the sit-in, the workers learned of the arrival of the dismissal letters to the sectoral secretariats, intended for 330 employees of Via Argine. According to what has been learned, however, the email was not sent to the Industrial Union of Naples. “He is blowing on the fire of the revolt is not understandable attitude on their part and on the part of the Industrialists Union. It is bringing the city to the brink of exasperation”, declared the secretary of the UIL. Giovanni Sgambati.

In all of this though Whirlpool denied having sent dismissal letters to employees of the Naples site: the company specified that it had sent letters to the trade union representatives and the competent institutions on the start of the collective dismissal procedure, as anticipated yesterday at the table at Mise . The group recalled that “the procedure has a duration of 75 days, during which the employees of the Naples site will receive normal pay”. And therefore, “no dismissal letter will be sent by the company to employees until the end of the procedure, as required by law”.

Whirlpool ad Affari: “No one has shown interest in the plant. Open to dialogue with the government, even immediately”

In view of these statements, Affaritaliani.it has contacted Whirlpool to clarify what happened. “In a nutshell, these 75 days do not prevent any possible identification of alternatives. Technically, the collective dismissal procedure serves precisely to give time to redefinitions. Employees will continue to receive compensation, “confirmed the multinational.

While on the future scenario, the picture is still uncertain. To Affaritaliani.it the company revealed: “At the moment we have not had any news from Invitalia or the government on who might be interested, if any.” “In 2019 we had identified an interested party (BRS) to take over the site and workers, but rejected by the government and unions. With the pandemic then everything stopped. Now, as the layoffs stopped, no one showed interest in taking the site, so we started the proceedings, ”Whirlpool said.

“If there is any proposal on the table between government and Invitalia it does not appear to us. But we remain open for a confrontation, even immediate ”, commented the American multinational. Although in reality, according to rumors reported by Affaritaliani.it, on the Naples table the name of the Japanese group is mentioned Hitachi.

1,300 missing in German city after floods, at least several dead

Thanks to the Recovery plan, the terrain of political consensus is environmentalism once dear only to the left

Edition, called to ferry the Benettons in the post-Morandi: who is Laghi

Draghi, what a volleyball pride, unforgettable months for sport – Ruetir

Thanks to the Recovery plan, the terrain of political consensus is environmentalism once dear only to the left