After coup speeches, Bolsonaro now claims to be boycotted by ‘important people’ 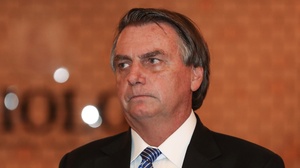 Amid the tension between the Powers caused by his recent coup statements, President Jair Bolsonaro (no party) said on Monday (12) that he is the target of a boycott by “important people”.

“The problems are part of it. I knew it would be difficult, but I hoped to have more important people on my side. Unfortunately, many important people there boycott,” Bolsonaro told supporters at the door of the Palácio da Alvorada.

The interaction was recorded and broadcast through an internet channel sympathetic to the president.

​The tense atmosphere between the Powers was not overcome during the weekend, when emissaries from the Planalto Palace brought to the president of the Senate, Rodrigo Pacheco (DEM-MG), Bolsonaro’s irritation with the senator’s statements.

Pacheco said on Friday (9) that he will not accept setbacks to the country’s democracy and that anyone acting in that direction will be considered the nation’s enemy. He has signaled to interlocutors that he does not intend to back down from the position he has taken.

Also on Friday, the minister of the STF (Supreme Federal Court) and president of the TSE (Superior Electoral Court), Luís Roberto Barroso, said that any attempt to prevent the holding of elections in 2022 “constitutes a crime of responsibility”.

On Saturday (10), the president of the Chamber, Arthur Lira (PP-AL), stated in an interview that he has no commitment to anti-democratic intent and criticized political demonstrations by military commanders.

The sequence of positions by authorities came in the wake of statements by Bolsonaro, who claims that the 2022 elections may not take place if a reliable electoral system does not exist — according to him, the printed vote.

The coup escalation takes place in a context of opinion polls that point to peaks of rejection and broad favoritism of former president Luiz Inácio Lula da Silva (PT) in the 2022 race.

In addition to Bolsonaro, Defense Minister Braga Netto and the Armed Forces commanders helped raise the temperature by releasing a statement in which they repudiated statements made by Covid’s CPI president, senator Omar Aziz (PSD-AM), about the military personnel under investigation and in the sights of the commission.

To complete the scenario of escalating tension, on Friday, the Air Force commander, Lieutenant Brigadier of the Air Carlos de Almeida Baptista Junior, reaffirmed the terms of the note in an interview with O Globo newspaper and said that the Armed Forces have a “legal basis” to act, without making clear what the action would be and against whom.

The assistants, the president admitted his irritation with the manifestations of the other Powers and, like Pacheco, also affirmed that he does not intend to lower the tone, but pointed out that he will make an effort not to attack institutions, directing his outbursts to specific people.

“The question that remains: why do three ministers of the Supreme vehemently reject the possibility of having elections with audited votes?” the president wrote.

On the side of the judiciary, Barroso told people close to his indignation at what has happened. For the minister, as he has been attacked, the white flag should not come from him.

The president of the Supreme Court, Luiz Fux, indicated that he intends to seek institutional dialogue with the other Powers.​

To supporters, on Monday, Bolsonaro again criticized the CPI summit of Covid, said he did not want to fight with anyone, despite not being “Jairzinho Paz e Amor” and insisted on casting doubts on the 2022 elections.

“I don’t want to fight anyone. We all want clean and transparent elections. If not, it’s not election, it’s fraud,” said the president.

“Now, we’re going to do everything so that we have clean and transparent elections for the good of Brazil, because if that’s not the case, it’s a sign that whoever will lead us has already been chosen. And the people who arrive at the fraud have no commitment with you,” he told supporters.

The president took advantage of the interaction with his voters to attack the Datafolha poll released over the past few days.

The institute showed that Lula appears at the front in the two scenarios presented to the voter and in all the simulations of disputes in the second round — in the one in which he faces Bolsonaro, he has 58% against 31%.

Datafolha also showed that, in addition to the majority of respondents evaluating the president as dishonest, false, incompetent, unprepared, indecisive, authoritarian and unintelligent, his disapproval reached a new record —51%.

“Believe in Datafolha research? Although Datafolha, I think it received little money this time. He says that, in the second round, Lula has 60%. So, he has to put more money in Datafolha to go to 70, 80 [%]. Who knows, right, we trust Datafolha and won’t even vote. He is already elected,” said Bolsonaro.

“Datafolha reaffirms all the results and informs that the research was carried out within the strict methodological and scientific standards practiced in all surveys of the institute. The research was commissioned and supported by the leaf. Datafolha does not work for candidates and parties,” says, in a statement, the director-general of Datafolha, Mauro Paulino.

The oldest of all .. the discovery of the skeleton of an extinct fish in China