Area of ​​future park in the east side of SP, with remnants of the Atlantic forest, is invaded by a new favela 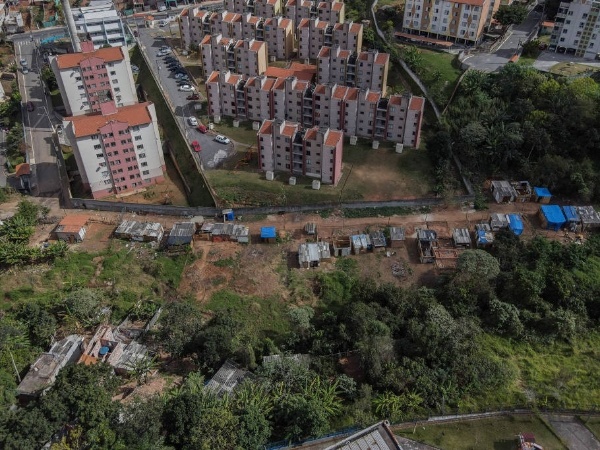 A mat of remaining Atlantic forest trees in the eastern zone, the most populous region of the city of São Paulo, is the target of accelerated degradation. In images captured by drone of the Leaf, see each other blue tarpaulins covering a row of shacks that form a new favela in place.

Environmental crime occurs in several portions of the 150,000 m area2 surrounded by buildings and houses and that should be structured to become the Municipal Park Fazenda da Juta.

However, the vacuum left by the administration of then Mayor Bruno Covas (1980-2021) and by the current incumbent, Ricardo Nunes (MDB), has given way to the actions of criminals, who use vulnerable homeless families to cut down native trees and open new clandestine lots.

Representatives of social organizations, politicians and educators told the leaf that the green area is being deforested under the orders of the criminal organization PCC (First Command of the Capital).

In addition to commanding arms and drug trafficking, the members of the PCC have followed the same primer as the militiamen in Rio de Janeiro. In order to expand their domain to the periphery of São Paulo, they promote land grabbing in territories where public authorities are absent.

The area has also become a disposal point for garbage and civil construction debris that have been threatening a water source and the diversity of animals — the city hall itself has already cataloged, through its Municipal Secretariat for Green and the Environment, 25 species of birds and 93 of the flora at the site.

The initiative to transform the area into a park was provided for in the Master Plan of the city of São Paulo in 2015 and, two years later, a bill signed by councilwoman Juliana Cardoso (PT) was approved by the City Council.

By law, the domain of the park is between Augustin Luberti and André Thevet streets and Luca Conforti street. It should be fenced with a fence and have a walking path, equipment for physical exercise, an administrative headquarters with security teams and a management council also made up of residents.

As none of this came out of the paper, the São Paulo Environmental Prosecutor’s Office opened a civil inquiry, in June this year, to investigate the authorities’ disregard for the preservation of the last green area of ​​Fazenda da Juta.

The inquiry requested action from the Environmental Military Police, the sub-prefecture of Sapopemba and other representatives who, according to the Public Ministry, have not yet manifested themselves. The Prosecutor’s Office is also planning an inspection of the site.

WHAT THE FUTURE PARK HAS

25
is the total of bird species, such as parrot, parakeet and the parakeet

93
is the number of flora species

109
is the total of parks managed by the city

7
these are the new parks in the process of being implemented in the city of São Paulo; 4 are under construction, 1, under bidding and 2, under project bidding. Of the total, 6 are located in peripheral areas

Source: Secretariat of Green and Environment of the City of São Paulo

The Fazenda da Juta neighborhood received this name because there was a large rural property that produced jute, the vegetable fiber used in making bags for coffee produced in the 19th century.

It is part of the sub-prefecture of Sapopemba, which has the lowest green cover (vegetable, arboreal and undergrowth) per inhabitant of the city, according to the 2019 edition of the Mapa da Inigualdade, by Rede Nossa São Paulo.

Sapopemba, whose name is derived from the buttress, as the thick roots of Amazonian trees are called, had 3.65 square meters of green area per resident, according to this survey. For the WHO (World Health Organization), adequate urban space must contain at least 12 m² of vegetation cover per person.

Evaniza Rodrigues, 52, a member of the Movimento Sem-Terra Leste 1, says that the forest in the region was set aside as a park in the late 1980s, when the movement claimed the division and regularization of the unoccupied area with the CDHU ( Housing and Urban Development Company), of the São Paulo government.

At the time, residents organized to build their own houses. CDHU built the vertical condominiums and ceded other areas to become leisure spaces. “But everything was occupied with the arrival of more people. That’s the only vegetation left for the park”, says Rodrigues.

She claims, however, that the right to housing is a basic need and that families that are within the park’s boundaries are not registered in public records and are outside any regularization initiatives, she says.

Fazenda da Juta is 23 km away from Avenida Paulista, in the central region. Report from leaf showed that the stigmas related to the neighborhood lead residents to lie on their resumes who live in neighboring Santo André, a city in Greater São Paulo, in order to get a job.

The neighborhood faces low social indicators. At least 26% of the homes are made up of families with an income below the minimum wage, 9.7% of them are overcrowded –with six or more residents– and less than half of the properties are paid off, according to the IBGE (Brazilian Institute of Geography and Statistics).

Pressure on the last clump of vegetation has existed for some time, but never in the way of climbing today, residents say. Researcher Crécia Ferreira, who lives in front of the green area and coordinates the Daniel Comboni Institute, says that between May and June the climate became more tense.

“This invasion has been very strong. There is the issue of the pandemic [de Covid] which displaced a lot of people, but there are others who seek to invade to build shacks and rent.”

Ferreira is afflicted with a majestic yellow araçá plant that she planted in the forest ten years ago and which was the subject of her master’s thesis at PUC-SP. “The shacks are already close to him. I’m afraid it could be cut soon,” he says.

Councilwoman Juliana Cardoso (PT-SP), who was born in Sapopemba, claims that the forest has not disappeared from the map only because of the eco-vigilance of the residents. “They always call the Municipal Guard when they notice suspicious movement or the arrival of construction materials, such as sand and stones, in the park region.”

Cardoso also says that he has already set aside R$ 1 million in parliamentary amendments to encircle the area and, in official letters sent to the city hall, he requested resources from Fundurb (a fund that allocates resources from the collection of onerous grants in the city) to remove the park from paper.

“They [a prefeitura] they did not want to accept the appeal for this purpose, and the money ended up being used in other actions”, he says.

English geographer Matthew Richmond, who researched urban issues in Sapopemba, created a virtual petition to force lawsuits for reparation and projects in favor of the area that needs to be preserved in Fazenda da Juta.

Richmond says that the city’s inertia in relation to the park on the east side reinforces the inequalities of the largest metropolis in Latin America. “Environmental projects are always concentrated in the most central areas where the upper middle class population is located,” he says.

“The importance of open areas has never been so much talked about as in this pandemic. The residents of Juta have a green area, but they cannot use it because the city hall does not move”, says the researcher from the LSE (London School of Economics).

A leaf forwarded a request for an interview to Marlon Salles da Silva, 44, deputy mayor of Sapopemba, who says he lives in the district, but he preferred to manifest himself by note.

Silva says that, due to the occurrence of occupation in the area, there is an ongoing process that seeks information for land regularization or urbanization project within the park boundary.

He also states that an action, carried out on the 3rd, with the support of GCM Ambiental and the PM, “prevented the continuation of irregular constructions”. In the place, according to the subprefecture, there were no people living under the shacks.

The deputy mayor also says that the park does not have, at the moment, resources approved by Fundurb for its implementation.

The Secretariat of Green and the Environment, on the other hand, says, also in a note, that the city’s 2022-2025 Multi-Year Plan will include a budget forecast to structure the future Parque Fazenda da Juta.

The folder says that, in order to guarantee the preservation of the vegetation, “it budgeted for the fencing of the land with the standard fence, but there is no approval and forecast of when the area will be fenced”. He also claims that the secretariat’s Accounting and Finance Division did not locate records of parliamentary amendments to surround the park, as said by councilwoman Juliana Cardoso.

The city hall says it carries out routine inspections at the site, but neither she nor the GCM commented on the complaints about the PCC’s participation in the invasions against the park.

Free: They are giving away 2 interesting and entertaining indies for PC | LevelUp

Strategy in the world of The Lord of the Rings: this is how Rise to War works (iOS, Android)