SBK 2021. Quarto round a Donington Park 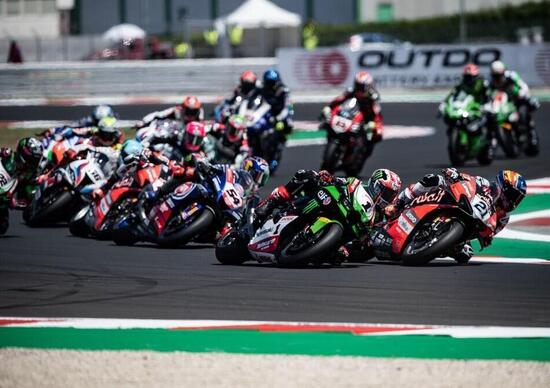 After a year of absence mainly due to covid19, Superbike returns to England, at Donington Park, the circuit located in the Leicestershire region a few kilometers from East Midlands airport, and for this reason constantly flown over by planes that land or take off. It is a historical track, in that back in April 1988, the first two races of the Superbike World Championship were held here, and is characterized by the typical English climate and therefore rainy, with weather forecasts that also in this case speak of precipitation even if light.

In this which is the fourth round of 2021, only the Superbike riders will be on the track and those of the Yamaha R3 Cup and it will certainly be an important appointment given the situation of the standings and the outcome of the last races in Misano. In the first position there is always Jonathan Rea, trailed 20 points by Toprak Razgatlioglu. Third place for Scott Redding at 45 points behind the Northern Irishman. Followed by Alex Lowes, Michael Ruben Rinaldi and Garrett Gerloff.

There are many reasons of interest: Will Razgatlioglu be able to nibble more points in Rea? Will Redding be able to rejoin the title fight? Will the young Rinaldi and Gerloff be able to reconfirm themselves at the top? Will BMW finally reach the top on Sykes’ favorite track?

Donington is the home track of the English drivers and especially of Rea and Sykes. In the last seven years, the world champion has won five races (all three in 2019) and achieved ten podiums. Six wins for Tom with ten podiums, among which the second position obtained in 2019 with BMW stands out. Jonny is betting a lot on the three races this weekend to stretch in the standings on his pursuers, while Sykes hopes to bring a positive result to the German company which until now has not achieved important results with the new M1000RR.

Speaking instead of their teammates, Alex Lowes has never ridden in Donington Park on a Kawasaki and the same goes for Michael Van der Mark, who won both 2018 races when he was at Yamaha, but never raced there with a BMW. This track is also very popular with Toprak who climbed the second step of the podium three times here, when he was still racing for the Kawasaki of the Puccetti team. In the most tortuous part, made up of braking and stop and go, the Turkish could be unbeatable and confirm the excellent results obtained at Misano. The races of this fourth round could give us an elbow-to-elbow fight between Rea and Razgatlioglu, but in addition to the aforementioned Sykes we obviously must not underestimate the two riders of the official Ducati team: Redding and Rinaldi. The blond English driver knows this track very well and will do everything to relaunch himself in the fight for the title. In his previous appearances at Donington, the Italian did not go beyond eleventh place, but from 2019 to today things have changed for Michael who wants to continue the streak of positive results started in the home races of the previous round.

They will also be home races for Leon Haslam one of the real experts of this track, where he went fast with all the bikes he used and collected three podiums from 2017 to today. Ron Haslam’s son could take advantage of the track knowledge to give some oxygen to the HRC Honda team, which so far has not met expectations. Alvaro Bautista also knows Donington Park well and took third place in Superbike in 2019.

As for the Independent pilots eyes on Garrett Gerloff fresh from the wild card in the Assen MotoGP. The American has never ridden on the Leicestershire track, but as he has shown in GP too, he knows how to learn new tracks quickly. His team-mate Kohta Nozane has recovered from the injury he suffered in the Navarre tests and it will be a new experience for him too. Who is betting strongly on this English round is certainly Chaz Davies. After not collecting even a point at Misano, the Welshman will want to prove that he is still the Lionheart, and take the GoEleven team V4 to the podium, taking his 100th podium in Superbike.

Axel Bassani knows the English track from having raced there in Supersport, but with the Ducati superbike the music will be completely different. He too, like Gerloff, however, has demonstrated that he can learn quickly and therefore his goal will still be a top ten that until now has often turned into a “top seven”. Lucas Mahias’ nervous driving may prove productive at Donington, but the French Kawasaki Puccetti Racing has to be more consistent if he is to start harnessing his talent and the potential of his 2021 Ninja.

Desire for redemption for the two private BMWs Eugene Laverty and Jonas Folger, while for Isaac Viñales, Christophe Ponsson and Loris Cresson the goal is the points. In the TPR Team Pedercini Racing Luke Mossey replaces Samuele Cavalieri.

And finally some interesting and curious numbers. Race 1 will be number 330 for Tom Sykes, who moves to 47 points behind Troy Corser’s absolute record (377). It will be race number 200 for Alex Lowes and number 110 for Leon Haslam with a Honda. Only three drivers boast more appearances with the Japanese manufacturer: Aaron Slight (163), Jonathan Rea (140) and Colin Edwards (127). Tom Sykes holds the record for podiums at this track: 15 Seven drivers have won for the first time in their careers at Donington Park: Davide Tardozzi (Race 1 in 1988), Marco Lucchinelli (Race 2 in 1988), Giancarlo Falappa (Race 2 in 1989), Carl Fogarty (Race 2 in 1992) ), Neil Hodgson (Race 2 in 2000), Marco Melandri (Race 1 in 2011) and Michael van der Mark (Race 1 in 2018). Record of poles conquered in Donington for Tom Sykes: 7. His closest pursuer is Carl Fogarty with 4.

About “mentality beasts” and the golden gate: When Germany became European champions in 1996

The house of the Meilandjes has been sold for this amount

About "mentality beasts" and the golden gate: When Germany became European champions in 1996