It is direct confrontation between Ursula von der Leyen e Viktor Orban. After Uefa denied Germany to color the Allianz Arena rainbow (in support of the LGBT community and against the recent Hungarian law that makes books, films and content promoting homosexuality illegal) where it will be held Germany-Hungary, a series of comments and disputes arose between the President of the European Commission and the Hungarian Prime Minister. Uefa, the organizer of Euro2020, in a post on Twitter changed its logo and explained that “is proud to wear the colors of the rainbow. It is a symbol that embodies our core values, promoting everything we believe in: a more just and egalitarian society, tolerant of everyone, regardless of their background, creed or gender. “ 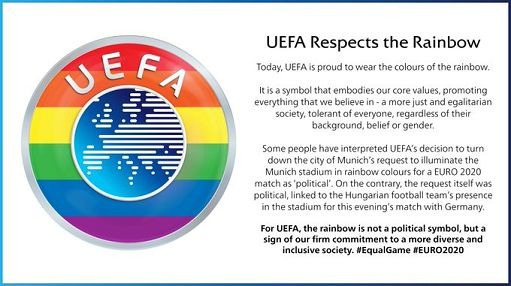 In the post there is the explanation of the no to the request of the city of Munich “the request itself was political, linked to the presence of the Hungarian football team at the stadium for tonight’s match against Germany. For UEFA, the rainbow is not a political symbol, but a a sign of our firm commitment to a more diverse and inclusive society“. Meanwhile the Hungarian Prime Minister Viktor Orban decided to cancel the trip that was to take him to Munich and decided – in the midst of the controversy over the anti-LGBT law approved in his country and the Uefa refusal to light up the stadium in rainbow colors for tonight’s match – to go to Brussels.

“Whether or not the stadium in Munich or another stadium in Europe is illuminated with rainbow colors it is not a state decision “ he told the Dpa, asking German politicians to accept the Uefa no. Meanwhile, the European Commission has threatened legal action against Hungary and called the disputed anti-LGBT law “a shame”.

“The statement by the President of the European Commission” on the alleged Hungarian anti-LGBT law “is a shame because it is based on false accusations“of” a biased political opinion “and are not preceded by” an impartial investigation “. Thus an official note from the Hungarian government”in response to comments from the President of the European Commission on the Hungarian law on child protection “. The law was considered by 17 EU countries as discriminatory against LGBT people and, this morning, von der Leyen announced that it will use all the powers of the Commission to protect citizens’ rights.

“The recently adopted Hungarian bill – according to the Government of Budapest – protects the rights of children, guarantees the rights of parents and does not apply to the sexual orientation rights of people over the age of 18, therefore it does not contain discriminatory elements“, reads the note.” The statement of the president of the Commission is a shame – the executive reiterates Viktor Orban – because the Hungarian bill is based on Article 14, paragraph 3 of the Charter of Fundamental Rights of the European Union “.

The harshest criticisms of the provision argue that the text confuses the nuances of non-heterosexuality with pedophilia. Thesis that would find confirmation in the words of Peter Szijjarto, Hungarian Foreign Minister, always addressed to the controversy over the Allianz Stadium: “Hungary has approved aegge to protect Hungarian children and now in Western Europe they complain. They want to express dissent by including politics in a sporting event, which has nothing to do with passing our laws. “

These 10 players are recommended for larger clubs at the EM

In a few days 21 deaths, 80 percent mortality, no cure. It is a virus, but it is not Covid

Alaska, man fights with a bear for a week: found by chance, he is safe

Lula’s appeal to Draghi: “The vaccine is for everyone, not just for those who can buy it”