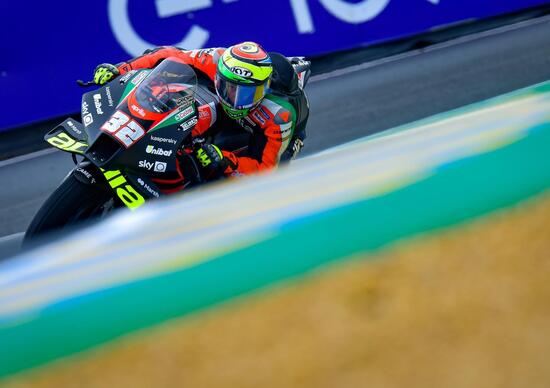 What were the keys to the GP?

What happened at the end of the first lap between Morbidelli, Rossi and Pol Espargaro?

Espargaro took a bad bump and found himself in the middle of the track rather slow. Rossi passed him, but the Honda rider resumed the line with great aggression, taking Morbidelli by surprise, who touched him.

Did Espargaro therefore commit an unfairness?

For me, absolutely not.

What happened to Morbidelli in the fall?

Unfortunately, Franco is in bad shape with his left knee (meniscus and ligaments) and falling you can see from the images that he puts pressure on the injured leg. Morbidelli explained that he felt very strong pain for a few seconds, then, fortunately, the worst was over. Morbido explained that he does not want to be operated on: in the next few days he will undergo a physiotherapy session.

What happened to the two Aprilia riders?

Both drivers were stopped by an unspecified technical problem. The first to stop was Lorenzo Savadori, on lap 11, while he was recovering in 12th position; Aleix Espargaro instead stopped on lap 16 while he was a good sixth.

Consideration: the times were obtained, of course, in the few dry laps. They confirm that we had gone ahead with slicks, Ducati would hardly have won.

Was it right to penalize Miller and Bagnaia with 2 long lap penalties?

Yes. According to the regulations, if you enter the pit lane during the race at a speed higher than the set 60 km / h, do you have to be penalized with a long lap penalty?

Comparison between teammates (in brackets in qualifying).

Punched engines (in brackets the one used in the race). I remember that everyone has 7 engines for the whole season, except Aprilia which has 9.

Why was Lorenzo Dalla Porta disqualified after finishing 11th in Moto2?

The minimum weight of bike + rider in Moto2 must be 217 kg, but Dalla Porta and his Kalex have been verified at 216 kg. Hence the disqualification.

Three reasons to remember the GP.

Three phrases from the GP

Marc Marquez, Saturday: “The goal is to finish the race”.

Jack Miller: “The best Ducati ever”

Johann Zarco: “We have everything to win”

Fabio Quartararo: “It counts as a victory”

Francesco Bagnaia: “I hoped for flag to flag”

Marc Marquez: “I made a mistake”

Danilo Petrucci: “I also thought about the podium”

Follow the commentary of the races with Zam and Livio Suppo LIVE TODAY AT 8.45pm

Relive the highlights of the 2021 French GP on our LIVE

The exploded dream of an Eritrean family

Brawn: “Ferrari will get back up” | Ruetir

The exploded dream of an Eritrean family