Rins: “If we continue along this line, the zero will be disguised” 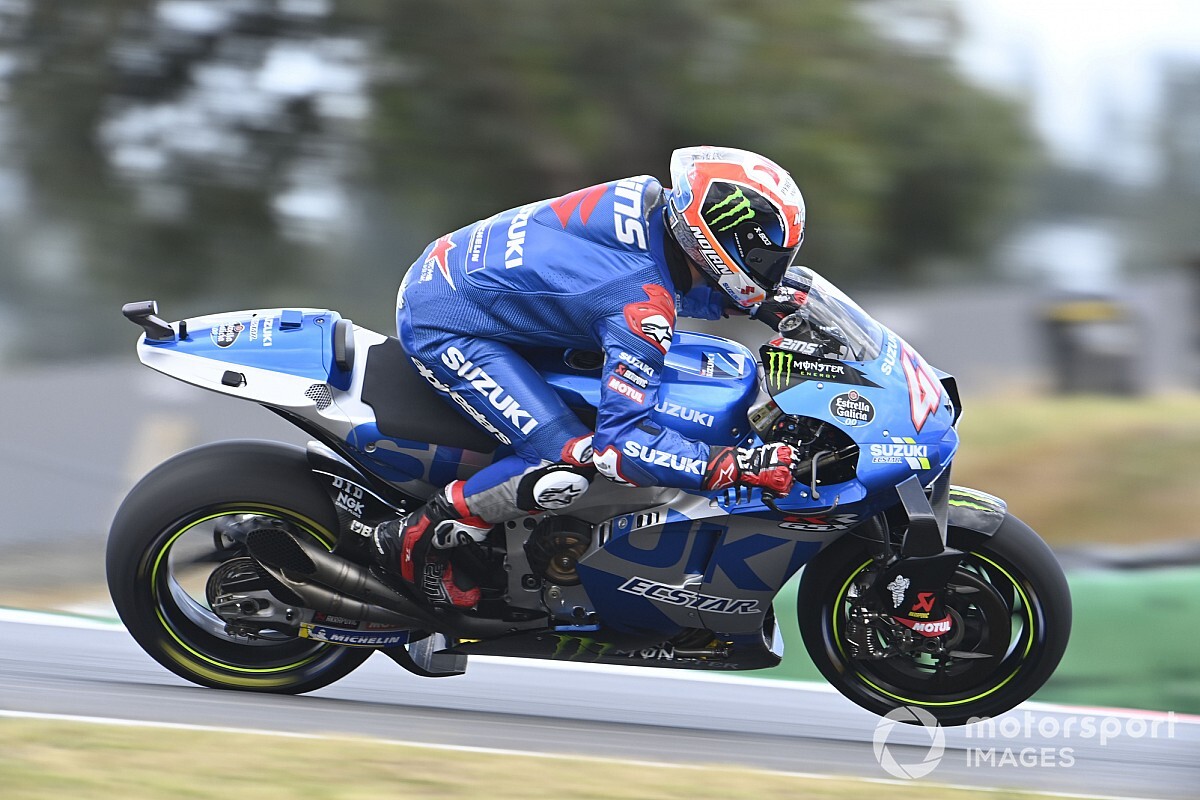 In Portugal, Alex Rins was completing one of the best races of his life, but with six laps to go he crashed, throwing away a brilliant race with a major setback in his world aspirations.

The Suzuki rider started from the second spot on the grid and held his position in the first three laps, taking the lead from the fourth to the eighth lap. Then he was overtaken by Fabio Quartararo and until the 18th lap he remained glued to the Yamaha rider’s wheel, not letting him breathe even for a moment despite the Frenchman’s furious pace.

“It was a very positive weekend, apart from the crash – says Rins – we managed the conditions and the different situations we found, staying in the top 10 on Friday and qualifying in the front row on Saturday, always alone. This is a very good thing for Suzuki ”.

“After the result on Saturday I didn’t have the hope of being able to run away with Fabio, but I felt good behind him before the crash, I was at the limit but I was fine. I was able to control the tires well, breathing. Sometimes I went beyond the limit of degradation, but this time everything was going very well, I was at ease behind the leader, it’s a shame to leave Portugal without reward. Analyzing the data, it is difficult to see why I crashed, I do not blame the tires or the track, but it is difficult to understand why ”.

However, for an experienced rider like Rins, getting that far and crashing is a very serious mistake: “Inside of me I’m angry, because I’m leaving with empty loot. On the other hand, however, I’m happy because I showed a pace that we didn’t have on Saturday and we stayed behind Fabio without suffering. We have only done three races and if we continue with this strength in the next few races, today’s zero will be disguised ”.

The crash, however, brings to mind similar memories of last year, with the injury that put a stop to the fight for the championship: “Last year we lost a lot of points in races very similar to this one. But there are two types of limits. One is when you don’t breathe, you make mistakes and are out of tires, but that’s not the case. The other is that of the Portimao race, from the beginning until I crashed I made no mistakes, I managed the overtaking on Zarco and Fabio’s pace very well, who was very strong for us from what we had seen on Saturday. The fall is difficult to explain. I talked to Valentino Rossi after the race and he told me the same thing, it’s very difficult to find a reason, because we crashed in the same place ”.

Rins does not want to accept the idea of ​​having been overwhelmed by the ambition of wanting to win instead of securing 20 important points behind Quartararo: “For races like this one can lose a championship, but in the next, if we do the same thing, we will be front”.

What is certain is that the crash is very reminiscent of last year in Austria, when he was first and he had the podium in his pocket: “I don’t know if the crashes are similar, at the time I entered more closed corners, I think. Whether or not it can matter will depend on how we go in the next races. If we do the same thing this weekend I think we can disguise well, that’s the mentality I have. If we’re looking for a culprit, that’s me. I didn’t choose to stay behind, I felt good and the championship is won by winning races and today we had the opportunity ”.

After his second victory and a monumental race, Quartararo has become the leader of the world reference point: “At the moment he is the driver to beat, he is first in the championship with 61 points, while I have 23. He will certainly go fast in Jerez. But the world championship will not be easy, this year there are many rivals, the Ducatis are doing well, Morbidelli, Vinales and Mir are there and it will be an interesting year for which there is still a lot of time ”.

As for Marc Marquez, he says: “I don’t know if I put Marc on the list too, it depends on how he gets to Jerez. I was betting a lot for him in this race, but he struggled. This track is much more physical than the next one, so he will definitely be better at Jerez ”.

Liverpool is losing points at Leeds

MG Marvel R Electric will cost between 40 and 50 grand

Franco Morbidelli disconsolate: “I couldn’t do anything”

Liverpool is losing points at Leeds